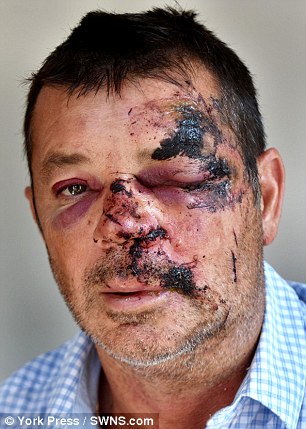 Kevin Farrell, 53, was left with a battered face and torn lip after he hit a pothole which he claims could kill someone

A cyclist who was seriously injured by a monster pothole claims it will KILL its next victim.

Kevin Farrell, 53, had to have his face stitched back together after he was flung through the air alongside four of his cycling buddies in York.

His front tyre exploded after entering the hole, which resembles a dinosaur’s footprint, and he was unseated before his fellow amateur cyclists ploughed into him.

Dad-of-two Kevin is now on a liquid diet and is unable to open his left eye after he needed surgery to repair a torn nose and lip.

Kevin, a self-employed electrical contractor from York, says the 60x40cm large pothole, which is also 9cm deep, will result in a fatality.

He said: ‘The problem is someone is going to get killed.

‘We’ve seen potholes all summer long and we just don’t see them getting repaired.

‘We’re all experienced, but if it was a child or someone less experienced, who knows what might have happened?’

The incident happened in Wigginton Road on the outskirts of York city centre at 8.30pm last Wednesday (Aug 29).

Luckily, there was a North Yorkshire Police van nearby and the officers helped stop traffic and called ambulances, while the hospital was only five minutes away.

The other four riders suffered injuries including a broken clavicle, cracked vertebrae and bleeding on the kidneys, as well as cuts and abrasions. 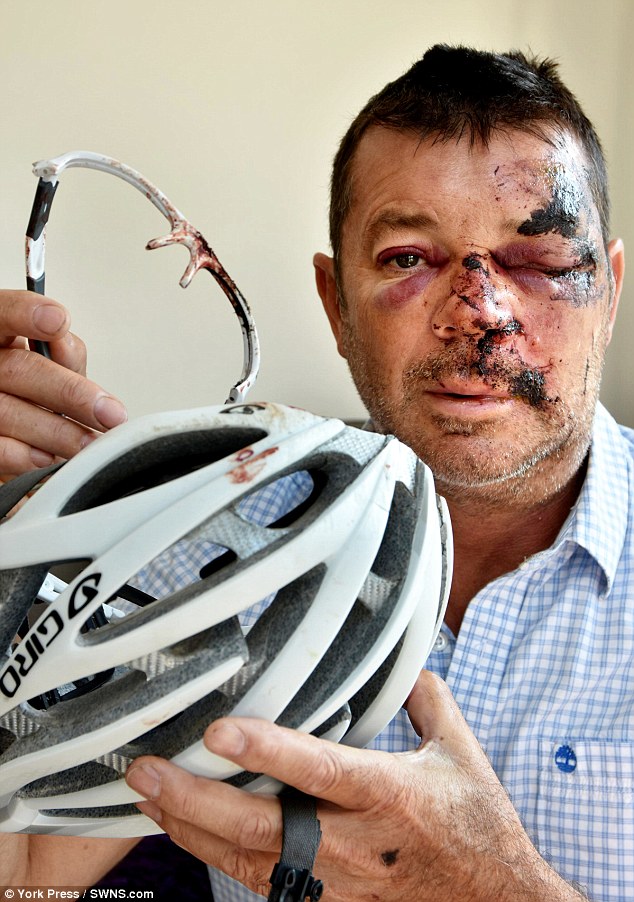 Mr Farrell, who is now on a liquid diet, shows the helmet and glasses he wore during the accident. He said the helmet saved him and should be made compulsory

Despite light being poor at the time of the smash, all the cyclists were using lights and wearing helmets, hi-vis gear and safety glasses.

Kevin, who is hoping to seek legal action, said: ‘There was a big lorry behind us, so it could’ve been a lot worse. 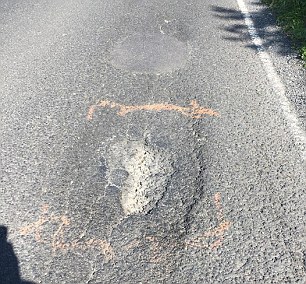 ‘I think the helmet saved me and I think it’s time they were made compulsory.

‘I just don’t want somebody else to get hurt. It always takes something bad to happen before anything is done.’

City of York Council said it was not aware of the incident but pledged to investigate if supplied more information.

A spokesman for City of York Council said: ‘We’re sorry to hear that a group of cyclists had an accident on Wigginton Road on Wednesday. We have not been made aware of an incident.

‘Our inspectors check Wigginton Road on a regular basis.

‘We would welcome further information so we can investigate if a repair is required to prevent a re-occurrence.

‘As with any insurance claim this will be assessed by our insurers – we wish them a speedy recovery.’