David Henderson, 39, can’t find smart black shoes that fit so he turns up to job interviews in his enormous white Adidas trainers — the only footwear he can get into.

He says he’s been stuck on benefits for almost a decade as interviewers don’t take him seriously because of his get-up.

And to add to his woes, cruel strangers mock him in the street with taunts like “clown shoes” and “Sideshow Bob”.

The fed-up former security guard searched Scotland for a cobbler who would make him bespoke shoes but drew a blank.

He extended his enquiries across the UK and found a London firm who could help.

But to his horror they quoted him a price of £1,500 — far beyond his means as his Universal Credit payment leaves him just £40 to spend each month after bills.

Now he’s going public with his problem in the hope it will help him find some decent shoes and get him off the dole.

David, from Methil, Fife, said last night: “My feet have just got wider over time and doctors don’t know why.

“Employers don’t believe me when I say I can’t buy black shoes but it’s impossible to find affordable ones in my size.

“Some interviewers are bemused when I tell them why I’m not wearing black shoes.

“Some are surprised and some are sympathetic. But I can tell some of them are thinking ‘are you for real?’ 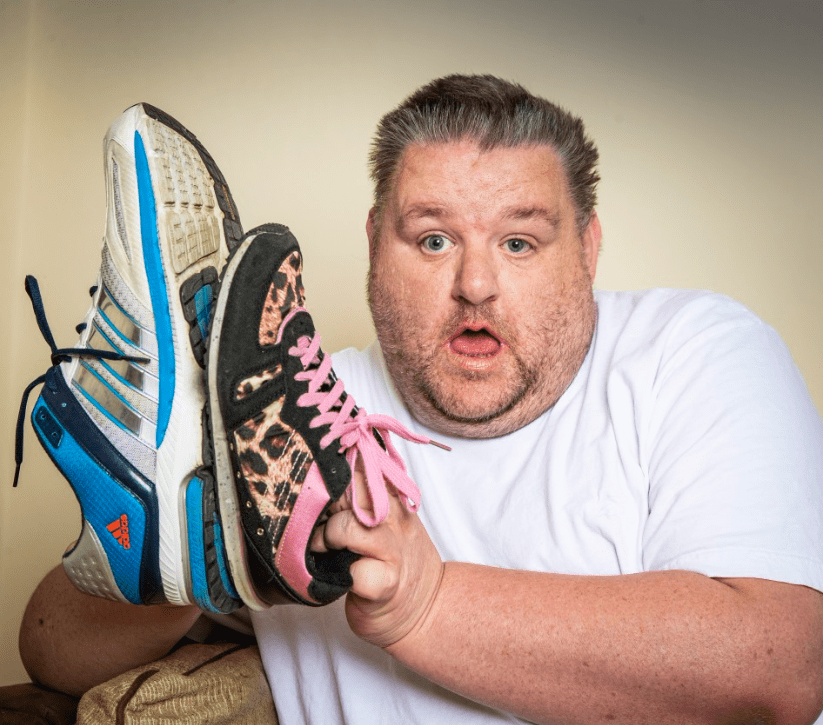 “I feel like a bit of a tink turning up to job interviews wearing a tracksuit, T-shirt and trainers — but I would look ridiculous if I was wearing smart clothes and my big white trainers.”

David added: “It’s been a total nightmare and very embarrassing. I feel like I have tried everywhere in Scotland but nobody does my size.

“And I get people making fun of me when I’m at the bus stop or walking down the street people say ‘Wow. look at him. Are those boats on your feet?’. Others call me ‘banana feet’.

"It’s demoralising. I think I’d have a job if I had shoes. It brings me down and it’s pretty hurtful.

“I just want to get back to work. I can’t be the only person in the UK with size 19 feet.”

David, who is 6ft 2in tall and weighs in at 24 stone, has had big feet since he was youngster.

When he left school he was a size 16. But he could find shoes that fitted him at the time and worked in retail, cleaning and security jobs through his 20s.

But since then his feet have grown three sizes and are almost 12in long and 7in wide. David says he has been turned down by at least ten employers since he last worked.

His worried girlfriend Annie Jones, 32, said she hopes he can resolve the situation and land a job.

Annie said: “People laugh at him. They point at him and call him names. It’s mean when they call him “clown shoes” and it gets him down.

"I hope he can get back to work. It would mean a lot to him.”