Home » World News » DC activists, BLM plan next round of protests after should Trump not 'concede' a Biden win

A coalition of activists around the country has shifted gears after polls closed on Election Day to take to the streets to ensure every vote is counted in the presidential election that’s included a record number of mail-in ballots amid the coronavirus pandemic.

The goal so far is to show a massive presence in the streets should President Trump fail to concede or challenge the election results in the event of a victory for Democratic candidate Joe Biden. 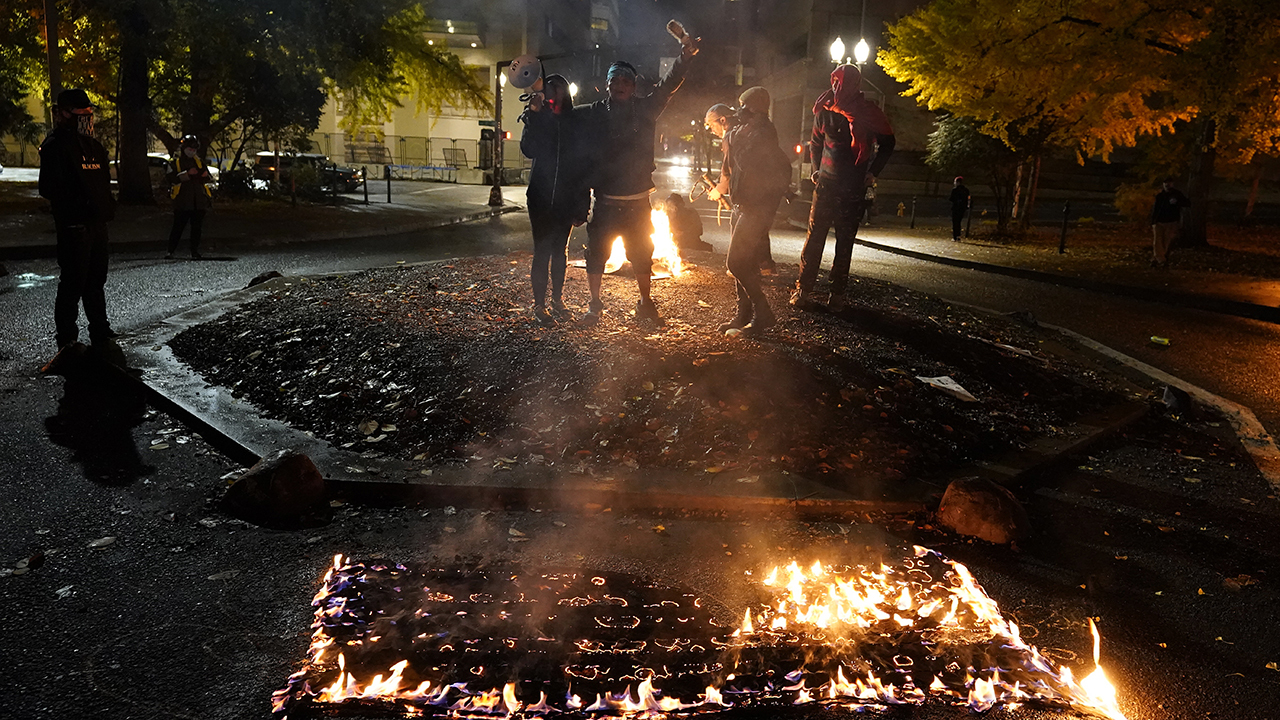 According to the Shutdown DC website, the next steps involve demonstrators meeting at either Union Station or Black Lives Matter Plaza across the street from the White House at around midday Wednesday to “keep showing up and keep supporting each other until the people swear in the new government.”

“The polls have closed and record numbers of voters have cast their ballots in this election. Now it’s time to make sure that every single vote is counted, so we can preserve the pillars of democracy and build the future we want to live in,” the organization said on its website.

“On November 4, we’re going to put the media, the party establishments, and the big donors on notice – we’re committed to defending democracy,” the website says in its agenda for Nov. 4. “After some short introductions, we’ll step off to deliver a dose of democracy to some powerful institutions in Washington, DC.”

The crowds in front of the White House on Tuesday night were categorized in several media reports as the equivalent of a large block party, with at least hundreds listening to music and some dancing. There was a heavy police presence, and at least some small skirmishes between protesters and officers were captured on videos circulated on social media.

Most instances were resolved quickly, according to USA Today, and an unidentified smoke filled the air as police tried to disperse crowds.

D.C. police said four people were arrested between Tuesday afternoon and Wednesday morning in instances related to the overnight unrest. Police remained on the hunt for a trio of suspects who reportedly slashed at least four people, including a Proud Boys leader.

Businesses were boarded up prior to Election Day, and a so-called non-scalable fence was installed around the White House perimeter.

The winner of the presidential election was not declared on election night, and several battleground states including Pennsylvania, Nevada, Michigan and Georgia had anywhere from hundreds of thousands to over a million ballots yet to be counted as of Wednesday morning. 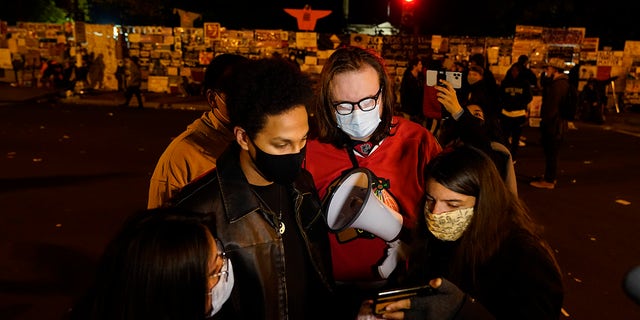 The group Choose Democracy went a step farther than street protests to assemble an online guide to starting a “pressure campaign” by gathering neighbors to call local leaders and force them “to publicly commit to ensuring that all votes are counted & the results are respected.”

The coalition Protect the Vote, made up of over 130 groups, including Choose Democracy, Color of Change PAC, Planned Parenthood, and even Republicans for the Rule of Law, has tentatively called for marches in various cities across the country from Nov. 4 until at least Nov. 7 if “Trump takes action to undermine the results,” according to its website.

ON ELECTION DAY, BUSINESSES BOARD UP AS POLICE BALANCE BETWEEN PROTECTING POLLS, LIVES

“We can’t assume that Donald Trump will respect the peaceful transfer of power,” Sean Eldridge, the founder and president of Stand Up America, which started organizing the coalition in June, said in a statement last week. If Trump tries to interfere in the counting of ballots, or pressures state or local officials to say ballots should no longer be counted, Eldridge said “then we would mobilize.”

Another coalition called Count On Us, formed by the groups Sunrise Movement, March For Lives, Dream Defenders and United We Dream, was working on get-out-the-vote initiatives before Nov. 3 and has since called for strikes if Trump contests the election results. 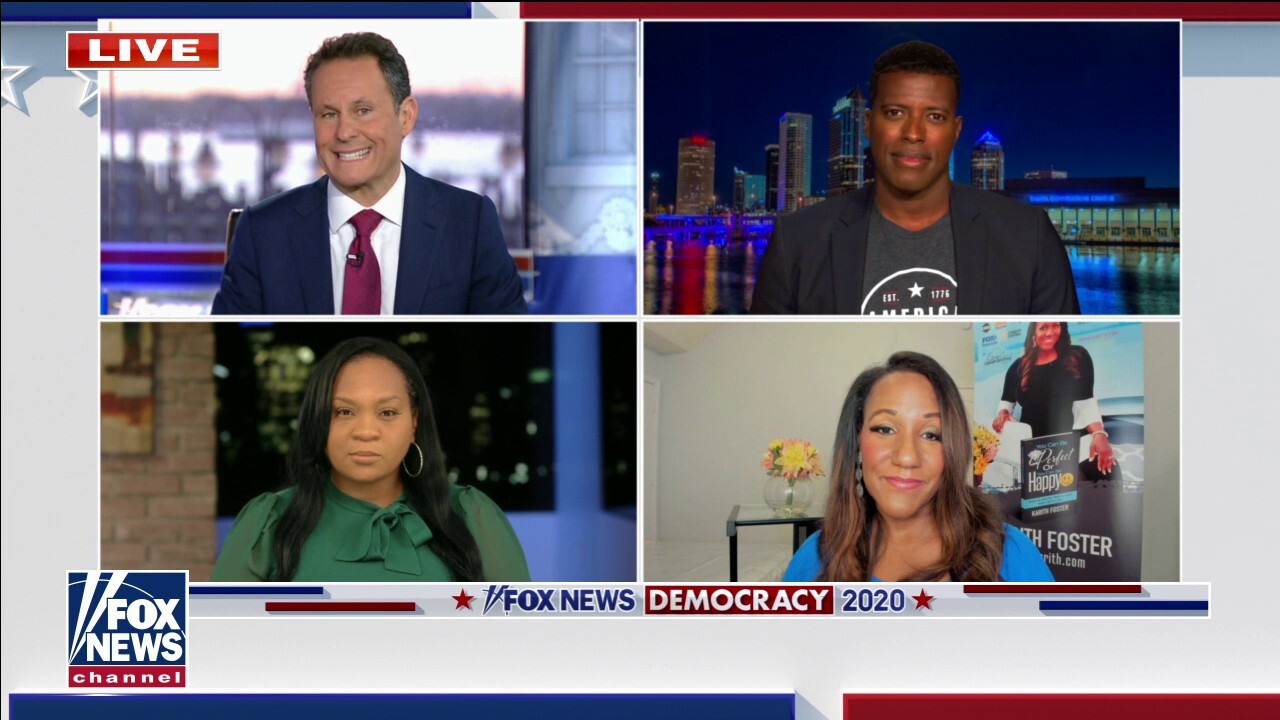 Election unrest: Why were protestors out across country although presidential race remains uncalled?

“If Trump tries to steal the election, we need to be ready to lead a mass strike to make sure every vote is counted. We make this country run and if we all refuse to go to work or school, there’s no way for Trump to govern,” according to its website.

A virtual town hall sponsored by the Working Families Party, The Frontline, Movement for Black Lives Electoral Justice Project and United We Dream Action will be hosted from D.C. at 8 p.m. EST on Nov. 4 to discuss critical updates and calls to action after Election Day.

According to the event website, the goal is “to see victory through — whether that means making sure every vote is counted, building momentum for a progressive agenda, or taking to the streets.”

As previously reported by Fox News, recordings purportedly showing Zoom training sessions led by the Sunrise Movement revealed more sinister plans after Election Day should Biden not be declared the victor, including telling demonstrators to break into and occupy government buildings in D.C. and federal workers to slow down bureaucratic processes.

The FBI neither confirmed nor denied an investigation into the recordings to Fox News.

Choose Democracy founder Daniel Hunter said in a recent interview with Vox that Americans can utilize tactics that have been successful against “coups” in other countries, including streets protest and rolling strikes – though those methods might not be necessary if Trump wins legitimately or accepts defeat.