A defendant standing trial on allegations of attacking a corrections officer sucker-punched his attorney in an Arizona courtroom after the judge ordered him to leave, according to a report.

The defendant, Lamont Payne, had repeatedly interrupted the judge during the courtroom proceeding last year, KTVK-TV of Phoenix reported.

"He was swearing and rolling his eyes and making a scene," his public attorney Vladimir Gagic said. "Just causing a commotion and being a troublemaker." 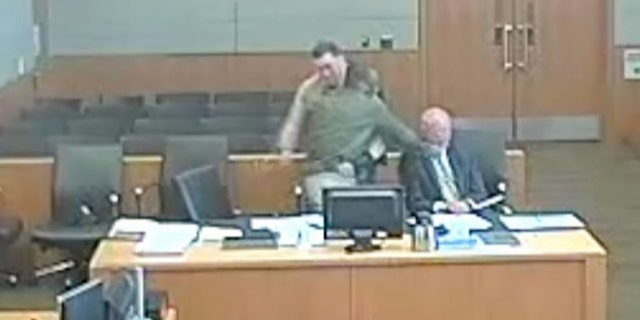 As Payne got up to leave he sucked-punched Gagic in a moment caught on video.

Galic was hired by the Maricopa County Office of the Public Defender to represent Payne who allegedly bit a corrections officer at a Maricopa County jail on the ankle in 2016.

"I didn't feel any force," said Gagic. "I didn't feel like pain or anything like that. It was just salty because you're tasting somebody's skin. It's kind of gross, but that's what I remember," KTVK reported.

Besides a bloody nose and a swollen face, he was otherwise unharmed in the alleged attack.

"I've been doing this close to 20 years, and I've had all sorts of clients, but nobody that actually acted out on it," Gagic said, according to the station.

Gagic has reportedly filed assault charges and Payne is no longer allowed in the courtroom, KTVK reported.

Gagic no longer works for the Maricopa County Public Defense Services, according to KNXV-TV.