A Democratic senator said Monday that decisions by Apple, Facebook, Spotify and YouTube to ban broadcasts and podcasts from conspiracy theorist Alex Jones are merely a good start.

Connecticut Sen. Chris Murphy’s broadsides came amid revelation of a draft policy proposal from Virginia Democratic Sen. Mark Warner that would set the social media world on its ear by holding websites like Facebook and Twitter legally responsible for libel committed by their users.

Murphy suggested Monday on Twitter that silencing Jones’ ‘Infowars’ program, typically identified with the political far-right, should mark the beginning of an industry-wide crackdown on ideas that governments themselves are constitutionally prohibited from squelching

‘I know Facebook and Apple and YouTube have gotten so big they sometimes seem like the government. But they aren’t,’ Murphy tweeted. ‘They are private companies that shouldn’t knowingly spread lies and hate. They took a good first step today by removing Infowars.’

Minutes later, he upped the ante. 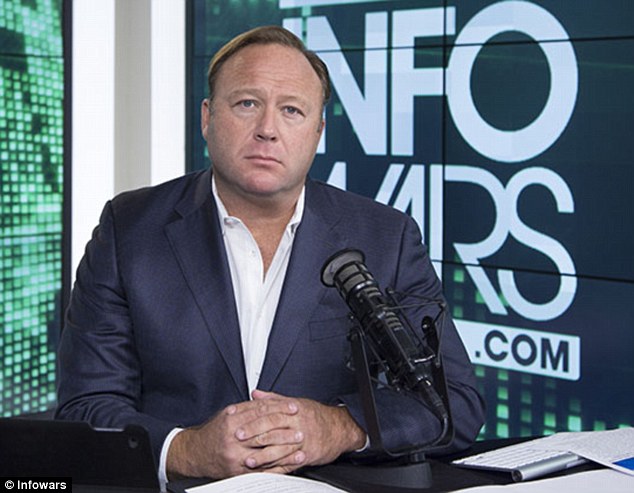 Conspiracy theory broadcaster Alex Jones saw his videos and podcasts yanked from major online platforms in recent days, and some Democrats want to see more of the same 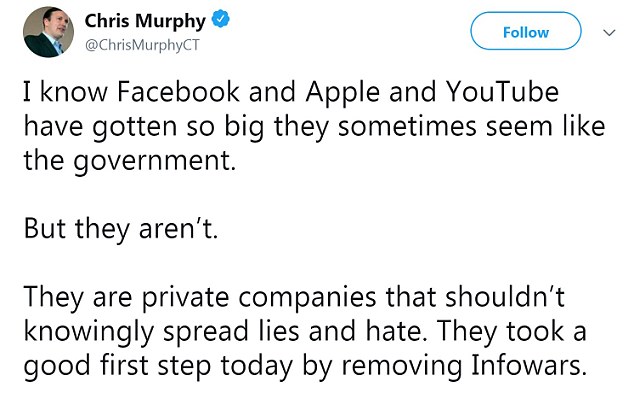 ‘Infowars is the tip of a giant iceberg of hate and lies that uses sites like Facebook and YouTube to tear our nation apart. These companies must do more than take down one website. The survival of our democracy depends on it,’ he claimed.

That post was promptly ‘ratioed’ – Twitter-speak for tweets that attract fewer fans than detractors. Roughly four times as many people posted responses to the message than approvingly retweeted it to their followers.

Jones and his fans see the banishments as a dramatic overreach by online platforms that have become the equivalent of public utilities.

He told The Washington Post that the actions against him were ‘a counter-strike against the global awakening’ led, in part, by traditional media outlets.

‘We’ve seen a giant yellow journalism campaign with thousands and thousands of articles for weeks, for months misrepresenting what I’ve said and done to set the precedent to de-platform me before Big Tech and the Democratic Party as well as some Republican establishment types move against the First Amendment in this country as we know it,’ Jones continued.

‘You’re on the wrong side of history mainstream media. You sold the country out, and now you’re going to pay for it.’ 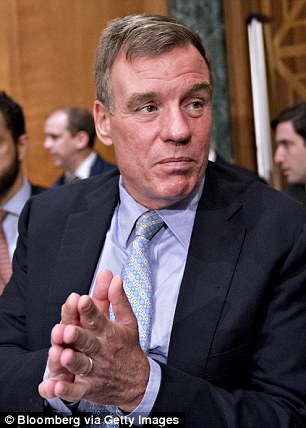 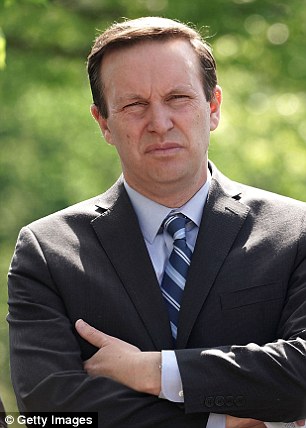 Murphy (right) argued that Jones, seen as a right-winger, is dangerous to the nation; Virginia Democratic Sen. Mark Warner (left) crafted a proposal to force social media companies’ hands by making them legally liable for what their users say publicly

Some on Capitol Hill reacted with a combination of snark and awe to the digital exile of a man who believes the 2012 Sandy Hook school shooting was a hoax and the 9-11 terror attack was a government ‘inside job.’

‘See?’ one Republican House aide said drily on Tuesday. ‘It’s not paranoia if they actually are out to get you.’

Warner’s proposals, while in rough form, include forcing social media companies to determine and publish the geographic location of users when they post information.

He also wants the platforms to confirm the real identities of all their account holders and ban ‘inauthentic’ ones.

But the biggest arrow in his quiver is a suggestion that social media companies should lose their legal exemption from ‘defamation, false light, [and] public disclosure of private facts’ lawsuits filed against individual users who are targeted by doctored audio or video.

‘Currently the onus is on victims to exhaustively search for, and report, this content to platforms – who frequently take months to respond and who are under no obligation thereafter to proactively prevent the same content from being re-uploaded in the future,’ Warner’s aides write. 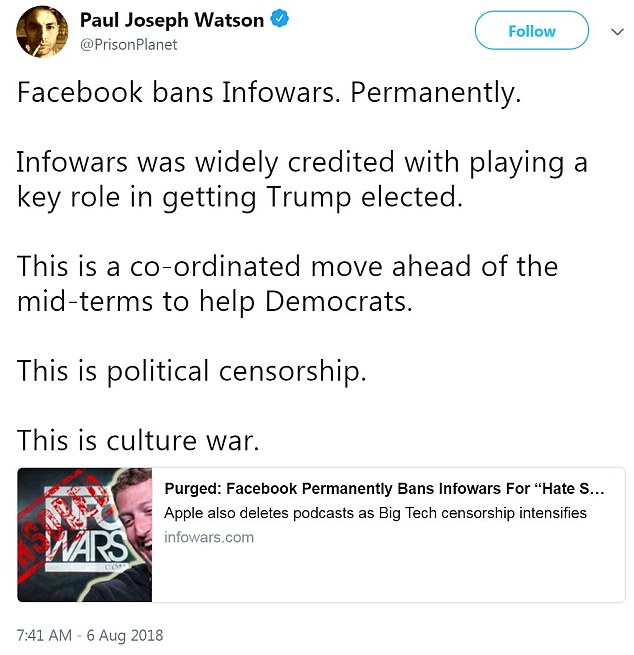 A GOP Senate aide on Tuesday called Warner’s proposals ‘a new level of authoritarian bonkers,’ and joked that ‘killing off anonymous Facebook and Twitter accounts and forcing people to say who they are would force Democrats to pick one of their two faces and go with it.’

Infowars editor Paul Joseph Watson said in a tweet that the muffling Jones’ voice was ‘a co-ordinated move ahead of the mid-terms to help Democrats. This is political censorship. This is culture war.’

Apple said after it deleted most of the Infowars podcasts that it ‘does not tolerate hate speech.’

‘We believe in representing a wide range of views, so long as people are respectful to those with differing opinions.’