New York: Democrats have invited Donald Trump to participate in impeachment hearings next week as they seek to bolster their case that the US President breached his oath of office.

The impeachment process is moving from the House Intelligence Committee to the House Judiciary Committee, which will be responsible for drafting articles of impeachment against Trump. 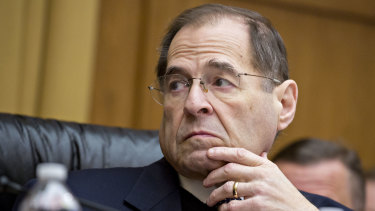 House Judiciary Chairman Jerrold Nadler will lead the next stage of the impeachment process. Credit:Bloomberg

The Judiciary Committee will invite scholars to hearings next Wednesday (Thursday Australian time) as well, to discuss whether Trump's behaviour in his dealings with Ukraine meets the standard for impeachment outlined in the US constitution.

This follows two weeks of public hearings in which veteran diplomats testified about their alarm at Trump's attempts to pressure the Ukrainian President to investigate his potential 2020 rival Joe Biden and discredited conspiracy theories about the 2016 election.

The constitution says that a president can be impeached and removed from office for committing "treason, bribery, or other high crimes and misdemeanours". 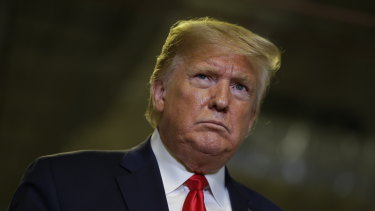 US Donald Trump has been invited to participate in impeachment hearings.Credit:AP

"The Committee intends this hearing to serve as an opportunity to discuss the historical and constitutional basis of impeachment, as well as the Framers' intent and understanding of terms like 'high crimes and misdemeanours'," Jerrold Nadler, the Democratic chair of the House Judiciary Committee, wrote in a letter to Trump on Tuesday (Wednesday Australian time).

"We expect to discuss the constitutional framework through which the House may analyse the evidence gathered in the present inquiry.

"We will also discuss whether your alleged actions warrant the House's exercising its authority to adopt articles of impeachment."

The speed of the process puts the Democrats on track to vote to impeach Trump by Christmas, setting the stage for a Senate trial in the New Year.

Trump would be just third US president in history to be impeached, joining Andrew Johnson in 1868 and Bill Clinton in 1998. Richard Nixon resigned before he could be impeached in 1974.

In a statement Nadler said he had "written to President Trump to remind him that the Committee’s impeachment inquiry rules allow for the President to attend the hearing and for his counsel to question the witness panel".

"At base, the President has a choice to make: he can take this opportunity to be represented in the impeachment hearings, or he can stop complaining about the process.

"I hope that he chooses to participate in the inquiry, directly or through counsel, as other Presidents have done before him."

The Judiciary Committee, then controlled by Republicans, convened a similar panel of expert witnesses in 1998 when debated whether to impeach President Bill Clinton.

The hearing will take place around the same time that the committee receives a written report from the House Intelligence Committee summarising the evidence gathered during its depositions and hearings into Trump's behaviour.