I’ll wipe you out! Dog leaps onto car dashboard as he tries to catch the windscreen wipers

This is the moment a dog scrambles across a car dashboard as it attempts to catch the windscreen wipers.

In the video, taken in Salem, New Hampshire, the Australian Shepherd jumps forward on to the dashboard.

Footage shows the energetic animal throwing itself towards the windshield as soon as the wipers go on. 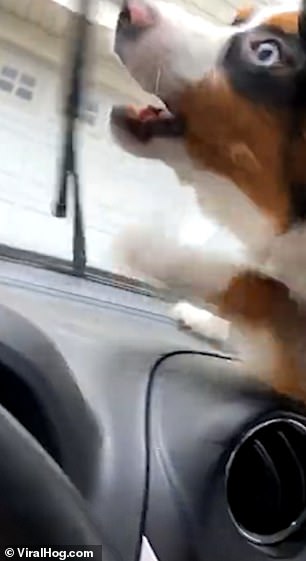 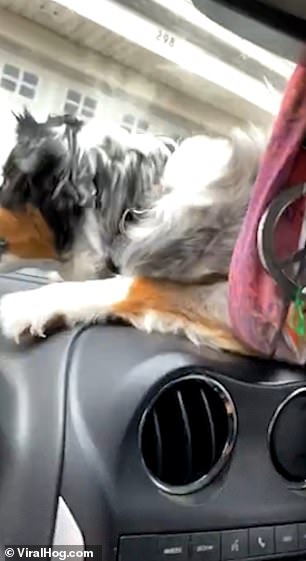 In the video, taken in Salem, New Hampshire, on October 21, the Australian Shepherd jumps forward on to the dashboard and tries to catch the windscreen wipers

Before the wipers start moving on the windshield the animal sits calmly on the front seat of the vehicle.

But as soon as they begin to move, the pooch springs from the passenger seat of the car and stands on its hind legs with its paws on the dashboard.

The animal pauses for a second before the wipers move again, and begins to clamber after them in the video taken on October 21.

As soon as they do, the animal’s paws scratch at the surface as it tries to catch the wipers, snapping at them and moving its head to follow where they go.

When the animal sees them in motion it goes wild and barks as it scrambles along the dashboard.

The dog doesn’t seem happy about the wipers that are moving quickly outside the car as his eyes dart after them.

The person who uploaded the video wrote: ‘My dog doesn’t like windshield wipers so he tried to get them.’