Washington: President Donald Trump's declaration that "I don't have an attorney general" was not merely the cry of an executive feeling betrayed by a subordinate.

It was also a raw expression of vulnerability and anger from a president who associates say increasingly believes he is unprotected — with the Russia investigation steamrolling ahead, anonymous administration officials seeking to undermine him and a referendum looming in the November 6 midterm elections, the results of which could potentially lead to impeachment proceedings.

In a freewheeling and friendly interview, Trump savaged Attorney General Jeff Sessions, mocking the nation's top law enforcement official for coming off as "mixed up and confused" during his Senate confirmation hearing and for his "sad" performance on the job. 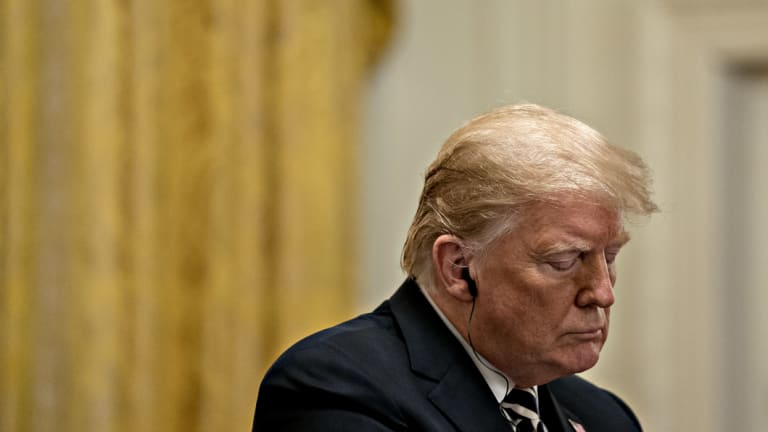 Behind the scenes, Donald Trump is confronting broadsides from every direction — legal, political and personal.

Though Trump has long railed against Sessions, both publicly and privately, for recusing himself from overseeing the Justice Department's Russia probe, the President's comments to Hill.TV brought his criticism to a new level.

"I don't have an attorney general," Trump said. "It's very sad."

Publicly, at least, Trump is going through the ordinary motions of being president. He met with the visiting president of Poland and on Wednesday toured the flood-ravaged Carolinas to survey damage from Hurricane Florence. He also prepared to hit the campaign trail with rallies in Nevada and Missouri, and next week will host scores of foreign dignitaries at the United Nations General Assembly in New York.

Behind the scenes, however, Trump is confronting broadsides from every direction — legal, political and personal.

The President, as well as family members and longtime loyalists, fret about who in the administration they can trust, people close to them said, rattled by a pair of devastating, unauthorised insider accounts this month from inside the White House. A senior administration official penned an anonymous column describing a "resistance" within to guard against the president's impulses, while Bob Woodward's new book, Fear, offers an alarming portrait of a president seemingly unfit for the office.

Some of Trump's allies believe he has legitimate cause for worry.

"The President should feel vulnerable because he is vulnerable – to those that fight him daily on implementing his agenda," Stephen Bannon, a former chief White House strategist, wrote in a text message.

"The Woodward book is the typed up meeting notes from 'The Committee to Save America,'" he added, referring dismissively to a loose alliance of advisers who saw themselves as protecting the country from Trump. "The anonymous op-ed is the declaration of an administrative coup by the Republican establishment.'"

In some respects, Trump has maintained a sanguine outlook. Former Trump campaign chairman Paul Manafort last week became the latest former member of the president's inner circle to agree to cooperate with federal prosecutors. But Trump has been uncharacteristically calm about the plea deal for Manafort, who he had praised only a month ago for refusing to "break" under pressure from special counsel Robert Mueller.

Asked if he was worried about Manafort's cooperation agreement, Trump told reporters on Wednesday, "No, I'm not . . . I believe that he will tell the truth. And if he tells the truth, no problem."

Trump has been similarly restrained this week as Judge Brett Kavanaugh, his pick for the Supreme Court, fights to save his nomination amid an accusation of sexual assault, which Kavanaugh denies. Trump has publicly defended Kavanaugh, though he has refrained from attacking the judge's accuser, Christine Blasey Ford.

White House officials, who began this week reeling from the assault allegation, said by midweek that they have concluded Kavanaugh would likely still win confirmation, especially given Ford's reluctance to testify at a public Senate Judiciary Committee hearing scheduled by Republicans for next Monday.

'He wants a consigliere, not an attorney general'

Nonetheless, Trump's screed against Sessions underscored the President's sense of anger and betrayal from his attorney general, who, despite executing much of the President's hard-line law-and-order agenda, has never been able to recover from what Trump views as an unforgivable sin: his recusal from the Russia investigation for a conflict of interest, which ultimately led to Mueller's appointment.

Trump told Hill.TV that he appointed Sessions out of blind loyalty, a decision he now regrets. Sessions' aggressive and controversial immigration actions — including emphasising "zero tolerance" for those who come to the country illegally and defending the administration policy of separating families – have been cheered by Trump allies. But the President even criticised his attorney general on this front, in a striking expression of his deep dissatisfaction.

"I'm not happy at the border, I'm not happy with numerous things, not just this," Trump said, referring to the Russia probe.

The President's attack on Sessions raised concern in the law enforcement community, and also prompted reactions ranging from exasperation to outright dismay among Trump's allies.

"Trump doesn't just blur the lines, he flat out tries to eradicate those lines," said Joyce Vance, a former US attorney in Alabama during the Obama administration. "He wants a consigliere, not an attorney general. On the one hand, it's a pitiful thing to watch, but it's also deadly serious, because the attorney general does not protect the president. The attorney general protects the American people. And the fact that we have a president who doesn't understand that is alarming."

A former White House official was similarly disturbed. "It is a complete disgrace the way that Trump is acting like a schoolyard bully against Sessions," the official said, requesting anonymity to share a critical opinion.

In the interview, Trump belittled Sessions, who he has previously nicknamed "Mr Magoo" and, according to Woodward's book, dismissed as "mentally retarded."

"He went through the nominating process and he did very poorly," Trump said of Sessions' Senate confirmation hearing. "He was giving very confusing answers, answers that should have been easily answered. And that was a rough time for him, and he won by one vote, I believe. You know, he won by just one vote."

It was not clear what Trump meant.

Career Justice Department ethics officials had told Sessions he had to step aside from any campaign-related investigations because he had been a top campaign surrogate and met with the Russian ambassador.

FBI officials would not have been among those providing advice. Then FBI Director James Comey said at a congressional hearing that he was aware of non-public information that he believed would force the attorney general to step aside before Sessions did so, though he declined to specify what those facts were.

After taking yet another public tongue-lashing from the President, Sessions gave a speech on Wednesday to law enforcement officials in Waukegan, Illinois, in which he effusively praised Trump.

"Under his strong leadership, we are respecting police again and enforcing our laws," Sessions said, according to his prepared remarks, which a DOJ spokesman said he delivered. "Based on my experience meeting with officers like you across the country, I believe that morale has already improved under President Trump. I can feel the difference."

Even as Sessions was dutifully showering compliments upon his boss, Trump was unwilling to throw him a lifeline.

"I'm disappointed in the attorney general for many reasons," Trump told reporters before leaving for North Carolina. "You understand that."