Amsterdam: Dutch Prime Minister Mark Rutte has said he was sorry for his country's role during the Holocaust and the lack of action against the persecution of Jews, becoming the first Dutch premier to make such an official apology.

"With the last remaining survivors among us, I apologise on behalf of the government for the actions of the government at the time", Rutte said at an event in Amsterdam to mark the 75th anniversary on Monday of the liberation of the Auschwitz death camp. 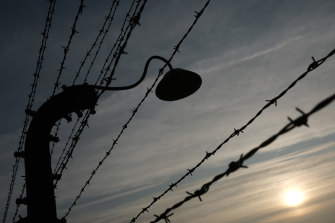 Barbed wire and a floodlight at the former Auschwitz-Birkenau German concentration camp on Sunday, near Oswiecim, Poland, where international leaders and survivors will mark the anniversary of the camp’s liberation.Credit:Getty Images

"I do so, realising that no word can describe something as enormous and awful as the Holocaust."

Earlier Dutch governments have made apologies for the way Jews who survived World War Two atrocities were treated when they returned home from concentration camps, but have shied away from condemning the country's part in the persecution of Jews and other minorities during the German occupation.

Too many people in government institutions at the time simply followed German orders, without realising the consequences of their actions for the people concerned, Rutte said.

Around 102,000 of the 6 million Jews murdered in the Holocaust came from the Netherlands. 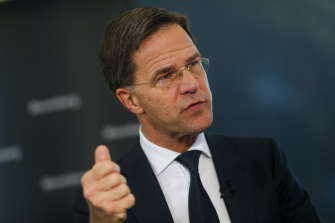 "We ask ourselves: how could this have happened?", Rutte said.

Meanwhile, four US rabbis led by New York's Avi Weiss gathered on Sunday in front of a church next to the Nazi German death camp at Birkenau in Poland arguing for its removal from a site where more than a million Jews were murdered.

World leaders will gather on Monday at Birkenau and the nearby Auschwitz camp to mark the 75th anniversary of their liberation.

"This protest for us is very much part of the commemoration. For there to be a commemoration ceremony without an expression of deep, deep outrage that the church is still here would send a message that we're ok with this," Weiss said.

The rabbis argue the church should not be on the site of one of the largest Jewish cemeteries in the world and it violates a 1987 agreement between European cardinals and Jewish leaders that there will not be any permanent Catholic place of worship on the site of the Auschwitz or Birkenau camps.

"This [the church] in my mind is the greatest desecration of the history of the Holocaust," Weiss said.

"Beneath this ground is a cemetery … their bloods are crying out from the ground demanding justice."

The rabbis want the church to be moved elsewhere in Oswiecim.

Anti-Semitic acts increased in France last year by 27 per cent, in new figures coinciding with the 75th anniversary of the liberation of the Auschwitz.

On top of that, acts described as bearing a racist and xenophobic character, mostly threats, more than doubled between 2018 and 2019 – increasing from 496 to 1142, according to a statement by Interior Minister Christophe Castaner.

"Expressions and acts of hate, whether they target origins or religious beliefs, whether they take the form of physical violence or verbal threats, are an intolerable attack on our common project, the foundations of our social … pact," the statement said.

To mobilise against forces of hate, and its banalisation, the ministry is creating a network of special investigators around France. And it has designated experts on racism and anti-Semitism in gendarmeries and departments, the statement said.

A total of 687 anti-Semitic acts were counted in 2019, compared to 541 the previous year. The account by the interior ministry showed that 151 of the acts were of the most severe category, "actions," meaning attacks on people or their possessions, theft or physical acts. There were 536 threats.

Anti-Muslim acts were counted at 154 compared to 100 in 2018. Anti-Christian acts were stable in 2019, but the figure was high at 1052, mainly attacks on goods or property with a religious character.

An online platform that would allow investigators to chat with witnesses and victims of hate is being set up, among a series of new measures now in place or in the works, the statement said.