‘If you stay like this, son of a b***h, I will really kill you’: Philippine President Duterte threatens corrupt police in expletive-laden rant on live TV

The 73-year-old said a special unit would watch corrupt officers ‘for life’ and that they would be killed if they commit ‘even a small mistake’.

More than 100 policemen, many of them facing administrative and criminal complaints including rape, kidnapping and robbery, were escorted to the presidential palace to meet Duterte, police officials said.

‘If you’ll stay like this, son of a b***h, I will really kill you,’ Duterte told the policemen in the dressing-down broadcast by local TV networks. 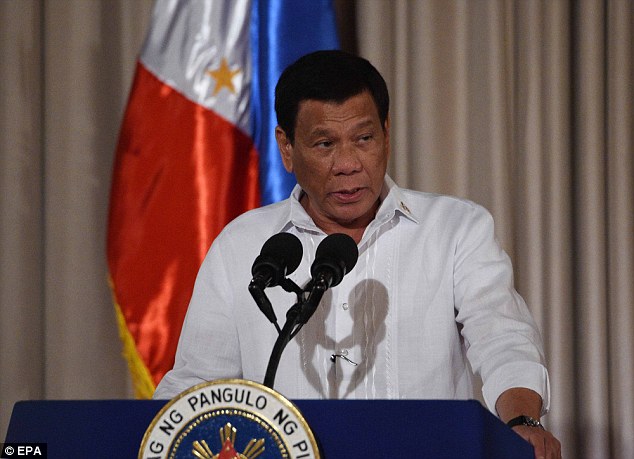 The cases of some of the policemen will be reviewed, but Duterte warned, ‘I have a special unit which will watch you for life and if you commit even a small mistake, I’ll ask that you be killed.’

Addressing the policemen’s families, Duterte said, ‘If these sons of b*****s die, don’t come to us yelling “human rights, due process” because I warned you already.’

The national police, which Duterte once called ‘corrupt to the core,’ have been undergoing an internal cleansing since they were removed twice from the president’s crackdown on illegal drugs last year due to reports of abuses.

Such public threats, along with the more than 4,500 mostly poor drug suspects who have been killed in gunbattles with police under Duterte’s anti-drug crackdown, have triggered alarm by Western governments and human rights watchdogs since he rose to power in mid-2016. 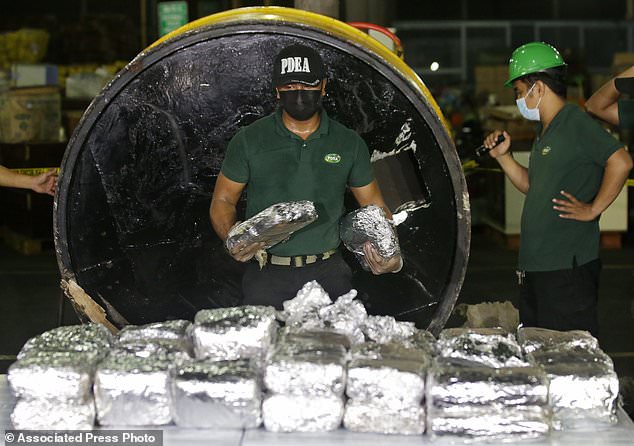 A member of the Philippine Drug Enforcement Agency, PDEA, collects packs of narcotics found hidden inside a steel cylinder in one of the biggest drug hauls in Manila, Philippines today

Duterte has vowed to press his campaign until the last day of his six-year term, often declaring that he is ready to go to jail, although he denies sanctioning extrajudicial killings.

Police say nearly 150,000 drug suspects have been arrested and dozens of law enforcers have been killed in drug raids, proving the danger of battling illegal drugs, which remain a major problem.

The Bureau of Customs and anti-drugs authorities announced Tuesday night the discovery of about half a ton (1,100 pounds) of methamphetamine, locally called shabu, concealed in two steel cylinders in two abandoned container vans at Manila’s international container port in one of the largest drug seizures under Duterte.

Philippine Drug Enforcement Agency chief Aaron Aquino said the vans came from Malaysia, which a drug syndicate may be using as a transhipment point, but were never claimed at the Manila port because of stricter screenings.

‘The fact that this did not get through this time is an indication that many no longer want to cooperate with the drug syndicates,’ he told reporters.