‘They have their dollar, we have Allah’: Erdogan claims currency crisis is a ‘national battle’ against Turkey’s ‘economic enemies’ as the lira hits a record low

President Recep Tayyip Erdogan is urging the Turkish people to exchange gold and hard currency into lira, after the currency hit a record low against the dollar today.

Erdogan framed Turkey’s currency crisis as a ‘national battle’ against economic enemies, namely the U.S., saying ‘if they have their dollar, we have the people, we have Allah’.

The lira plunged as much as 14 per cent on Friday, as worries about Erdogan’s influence over monetary policy and worsening U.S. relations snowballed into a market panic. 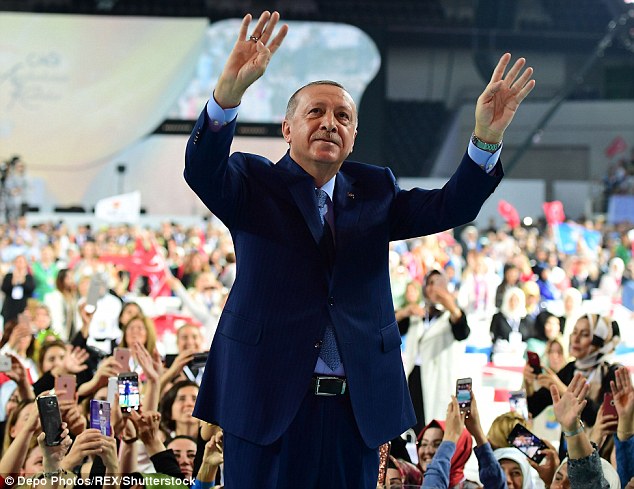 But President Erdogan brushed off any concerns during a speech in the northeastern city of Bayburt on Friday, saying: ‘The dollar cannot block our path. Don’t worry.

‘However, I say it once again from here. If there is anyone who has dollars or gold under their pillows, they should go exchange it for liras at our banks.

‘This is a national, domestic battle. This will be my people’s response to those who have waged an economic war against us.’

Turkey was facing artificial financial volatility, Erdogan said, and people should not pay close attention to foreign exchange prices, and should instead focus on the ‘big picture’.

He also said increasing production, exports and employment was the best response to the country’s challenges. 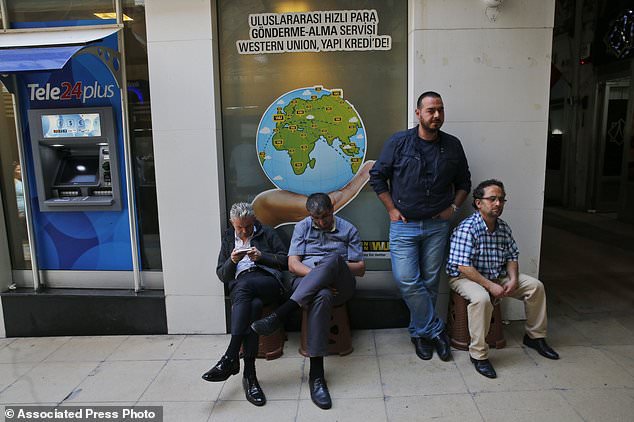 All change, all change: Currency exchange vendors wait for customers in a market in Istanbul

The lira hit a record low of 6.24 per dollar on Friday, before recovering to 5.92 – still down a whopping 7 per cent on the day.

The currency has fallen 66 per cent since the start of the year, pushing up the cost of goods for Turkish people and shaking international investors’ confidence in the country.

One of the triggers of the turmoil has been a standoff with the U.S. over a detained American pastor that Turkey, a NATO ally, has put on trial for espionage and terror-related charges linked to a failed coup attempt in the country two years ago.

Washington has demanded the pastor’s release and imposed financial sanctions on two Turkish ministers and warned of additional measures. High level meetings in Washington between U.S. and Turkish officials ended this week without an apparent resolution.

Meanwhile, investors are worried about the economic policies of President Recep Tayyip Erdogan, who won a new term in office in June with sweeping new powers.

Erdogan has been putting pressure on the central bank to not raise interest rates in order to keep fueling economic growth. He claims higher rates lead to higher inflation – the opposite of what standard economic theory says.

Independent analysts argue the central bank should instead raise rates to tame inflation and support the currency. 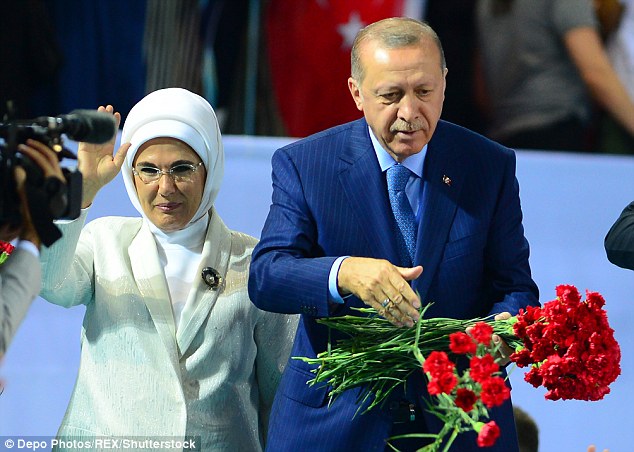 The lira plunged as much as 14 per cent on Friday, amid worries about the influence of Erdogan, pictured with his wife Emine, over monetary policy and worsening U.S. relations

In modern economies, central banks are meant to be independent of governments to make sure they set policies that are best for the economy, not politicians. But since adopting increased powers, Erdogan appears to have greater control over the bank as well.

Erdogan on Thursday portrayed the currency drop as a ‘campaign’ to harm Turkey and called on the people not to worry.

‘If they have their dollar, we have the people, we have Allah,’ he said.

Last week, he called on Turks to convert their foreign currency and gold into Turkish lira to help the currency.

Treasury and Finance Minister Berat Albayrak – who is Erdogan’s son-in-law – was scheduled later on Friday to outline a ‘new economic model.’

The currency drop is particularly painful for Turkey because the country finances a lot of its economic growth with foreign investment. As the currency drops, Turkish companies and households with debt in foreign currencies see their debts expand.

Coupled with an inflation rate of nearly 16 percent, that could cause a lot of damage to the local economy.

Foreign investors could be spooked and try to pull their money out, reinforcing the currency drop and potentially leading to financial instability.

Aylin Ertan, a 43-year-old caterer in Ankara, said she was concerned over the future of her small business.

‘The price of the food that I buy increases day by day, the fuel that I put in my car to distribute lunches is more expensive, but I cannot raise my prices from one day to the next,’ she said. ‘On some days, I end the day with a loss.’