Family and friends of Madison Jane Lyden, who was struck dead by a truck while holidaying in New York on Saturday, have expressed their heartbreak, describing the 23-year-old Australian as loyal and loving.

Ms Lyden, who lived in Geelong, was riding a rental bike on Central Park West when she swerved to avoid a van pulling into the cycling line. She was hit by a garbage truck driven by Felipe Chairez. 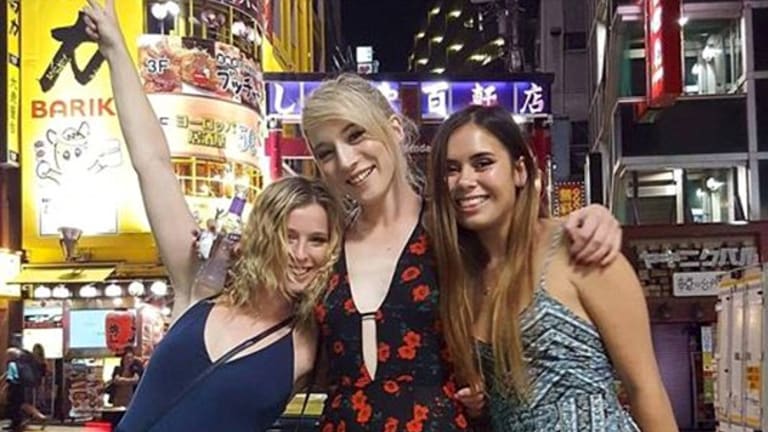 Members of the community have taken to social media to pay tribute to Madison Lyden (centre), who was killed by a truck while holidaying in New York.

A friend riding alongside tried to resuscitate Ms Lyden until the ambulance arrived. Ms Lyden suffered severe trauma injuries and was taken to the Roosevelt Hospital, where she was pronounced dead.

Her father Andrew Lyden, a prominent builder in Tasmania, told Southern Cross News that "for Madison to be taken from us in such a horrific way is gut-wrenching … Words can't describe how heart-breaking this is".

"Madison was a beautiful, beautiful daughter. She was loyal, loving," Mr Lyden said.

Mr Lyden's firm, Lyden Builders, has built several charity houses, including one for Diabetes Tasmania called Madison House in honour of his daughter who had Type 1 Diabetes.

Growing up in Lauderdale on the outskirts of Hobart, Ms Lyden moved to Geelong to study, recently graduating in psychology from Deakin University. She was overseas on what both of her parents described to reporters as "the trip of a lifetime".

Her twin sister Paige Lyden told WIN News that she doesn't "really know where to begin on what Madison meant to me and our family".

Meanwhile, members of the community have taken to social media to pay tribute to Ms Lyden.

The Premier of Tasmania, Will Hodgman, described the accident on Facebook as "the tragic loss of a bright, spirited young woman".

One of Ms Lyden's friends, Sophia Jones, said the psychology-graduate was a "chatter-box" who "always had a smile on that gorgeous face of yours".

Ashley Stevens thanked Ms Lyden for her friendship, adding that her "humble, independent and loving personality will always be one of a kind".

MacKillop Catholic College, where Ms Lyden attended high school, wrote on the school's official Facebook page that the community were "devastated to hear of the tragic death of our former student". They shared their thoughts and prayers with her family, "in particular Madison's twin sister who is a former student of the College and her step-mother, Lee-Anne, who is a former staff member of the College".

An NYPD spokesperson told Fairfax Media that the truck-driver Chairez, 44, from New York, is facing three serious driving charges: driving while intoxicated, driving while ability impaired, and driving a commercial vehicle under the influence of alcohol.