From Yorkshire mill girls in curlers and Ethiopian monks at prayer to John Lennon and Yoko eating cake: Fascinating images show the changing world of the 1960s and 1970s

John Lennon shares some cake with Yoko Ono, workers harvest salt in Ethiopia, while in Kentucky, a couple pose for the camera to illustrate the issue of white poverty.

Meanwhile, three ranks of society – the Army, the Church and the poor – are pictured in Ecuador.

These fascinating images were taken by pioneering photojournalist John Bulmer and highlight the turbulent decades of the 1960s and 1970s.

Born in Herefordshire in 1938, Bulmer – a grandson of the founder of the famous cider company – had been working with black and white film at the beginning of the 60s but the launch of The Sunday Times Colour Magazine in 1962 heralded in a new era.

And while the sudden switch to colour caught out some photographers, Bulmer made the adjustment seamlessly and became one of the magazine’s key contributors.

A selection of his work can currently be seen in an exhibition – John Bulmer: A Retrospective in Colour – at the Observatory Photography Gallery in London.

Bulmer’s commissions would take him to the four corners of a greatly changing world – chronicling life in more than 100 countries.

Just as European countries were withdrawing from their colonies, tensions were amplified by the contradictory forces of communist governments simultaneously attempting to expand their empires in Africa, South America and South-East Asia.

Bulmer, now retired and living in Hereford, would later branch out into documentary film-making, including one piece on the life of Van Gogh. 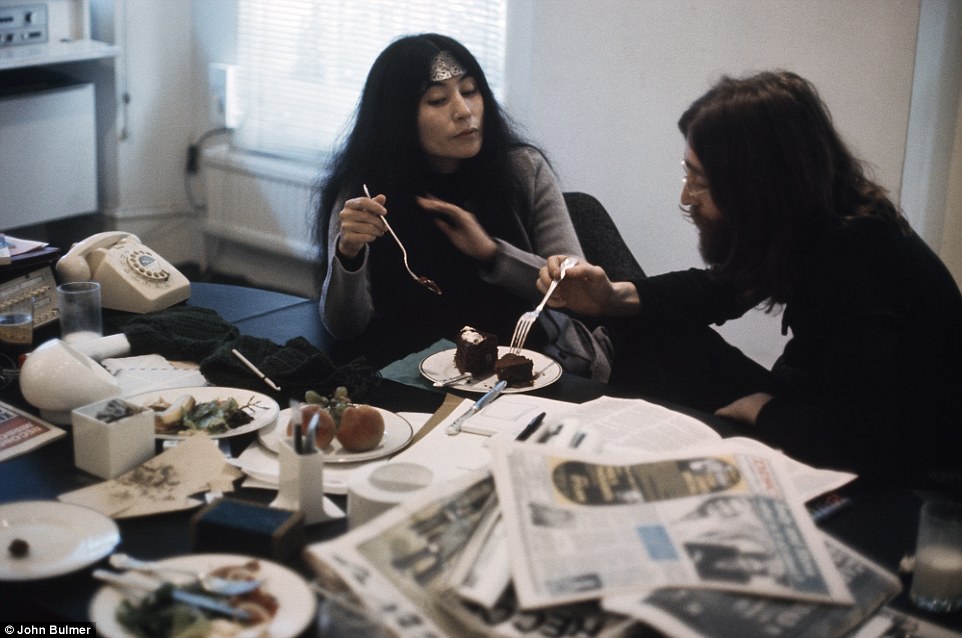 John Lennon and Yoko Ono share some cake at the Apple Offices, in London 1969. The milestone year saw Lennon leave the Beatles – and marry Yoko, with whom he would form the conceptual group, The Plastic Ono Band. Among the other celebrities that Bulmer photographed were Peter Sellers and Meryl Streep 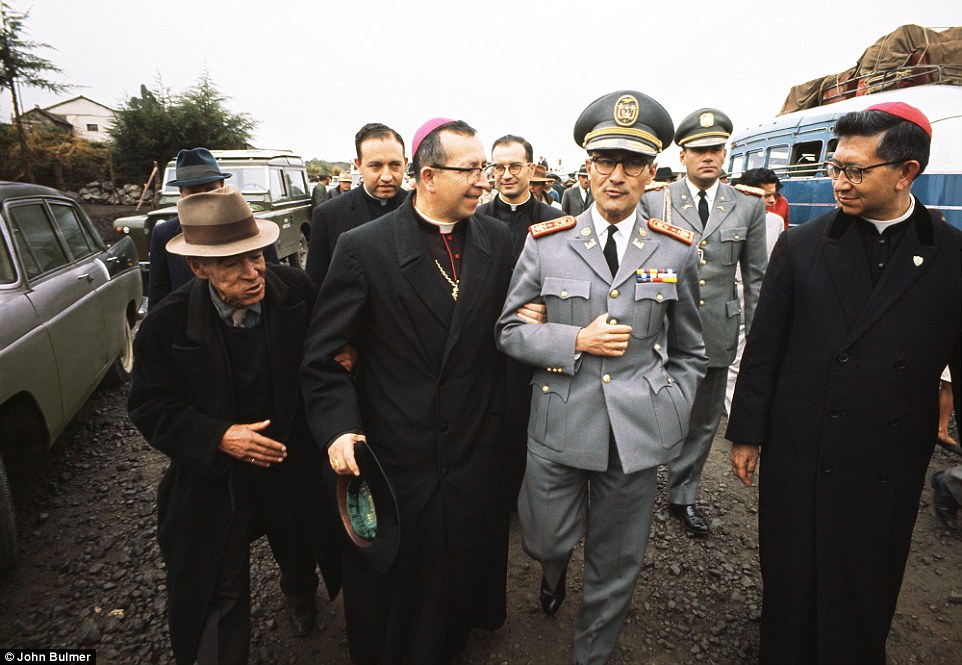 Ecuador 1965, near Quito: This striking image, taken by photojournalist John Bulmer, was taken two years after a military junta had taken control of the government – and show three levels of society: from Army to the Church to the poor. The junta had proclaimed martial law and banned the Communist Party of Ecuador on July 12, 1963. The junta would eventually be overthrown in 1966 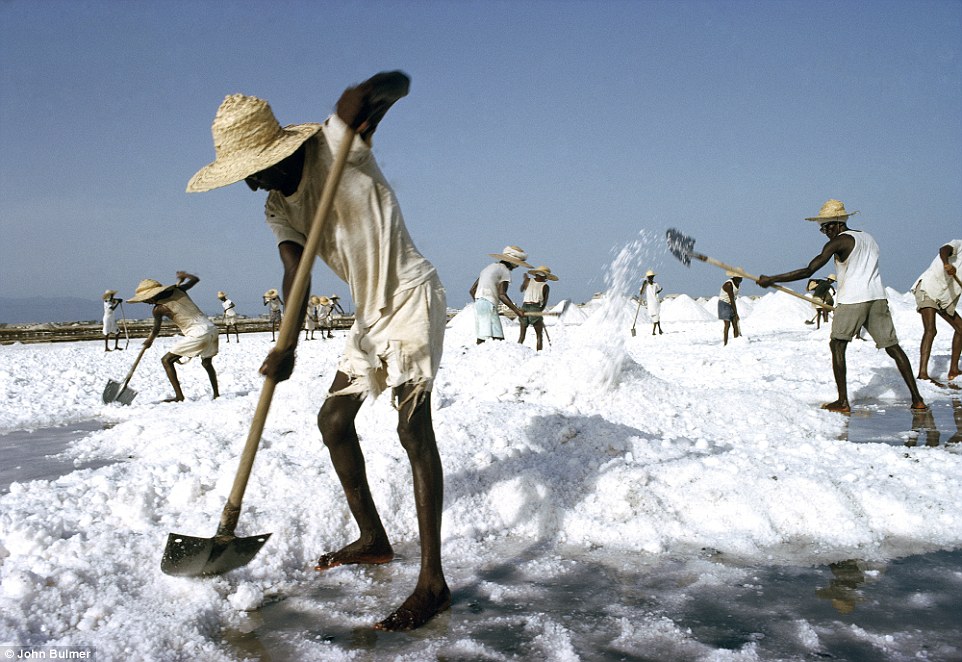 Harvesting salt in the salt flats at Massawa in Ethiopia circa 1965. The pictures seen here were all taken by Bulmer – a pioneering photojournalist, and grandson of the founder of the famous cider company. His photos have been shown in many galleries throughout the world, including The Gallery of Modern Art in New York, the Galerie David Guirand in Paris, and The Photographer’s Gallery and The Courtauld Institute in London 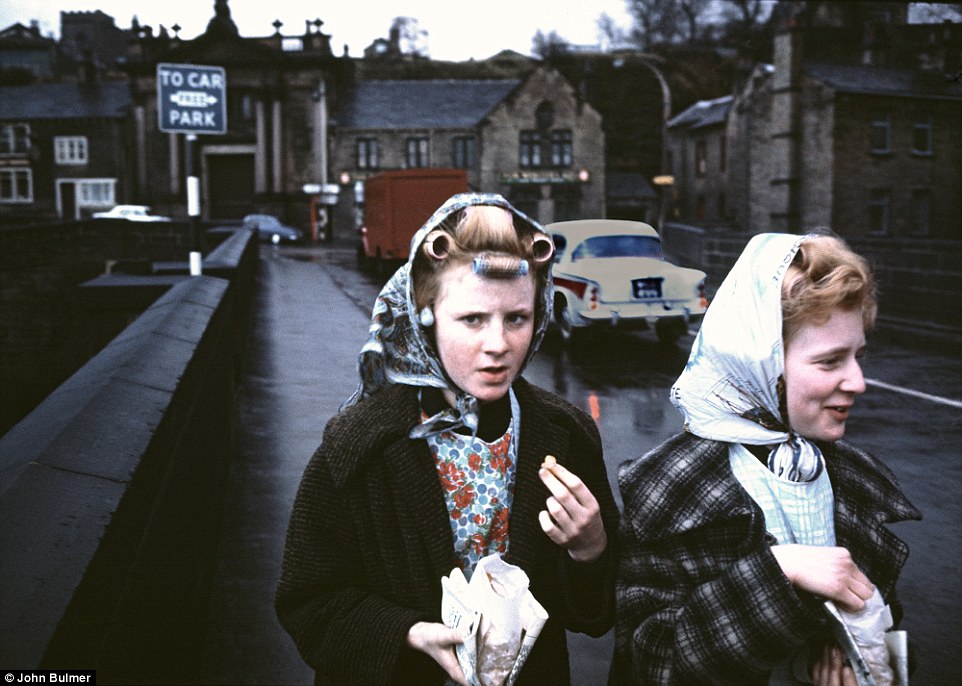 ‘Curlers and chips’, mill girls in Elland, Yorkshire, 1965. Although many of his assignments would take him abroad, Bulmer was a master chronicler of provincial Britain. These photos feature in an exhibition – John Bulmer: A Retrospective in Colour – at the Observatory Photography Gallery in London, and will run until December 5 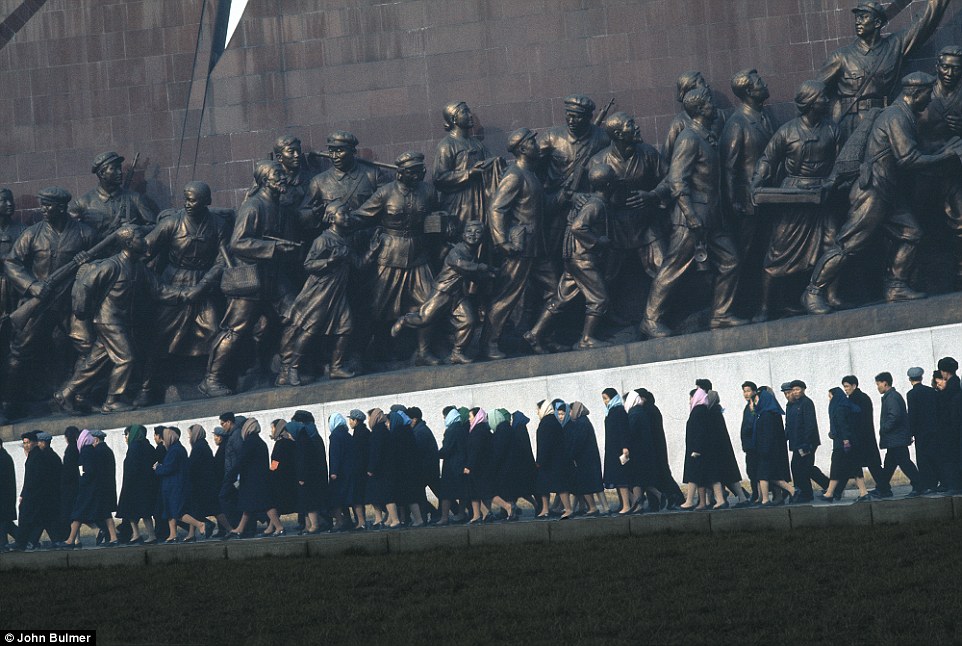 Pyongyang, North Korea, 1973. People go about their daily lives in the totalitarian state. A nation steeped in the cult of personality, it was then governed by Supreme leader Kim Il-Sung. Bulmer’s unerring eye was to distil the essence of the very contradiction that gave rise to communism; of the extremes of wealth and poverty made possible by capitalism within a single nation – exploring this division at home first and then later in France and the US 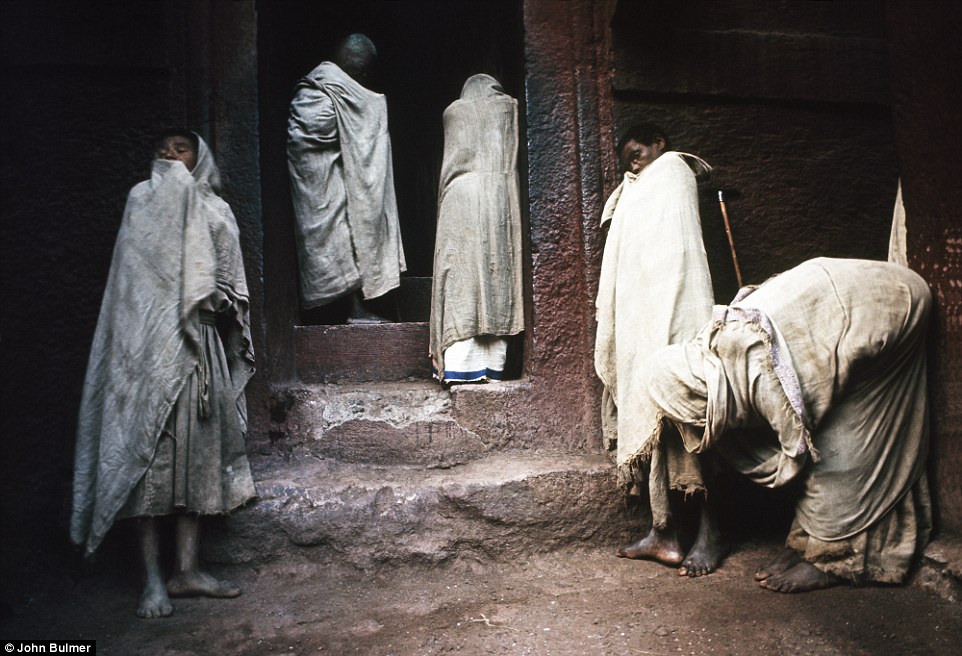 Lalibela, Ethiopia 1965. This fascinating image shows monks waiting for evening prayer. Known as Ethiopia’s holiest city, it is famous for its 11 monolithic rock-cut churches which were chiselled into the rock 900 years ago – and believed to have been carved by hand 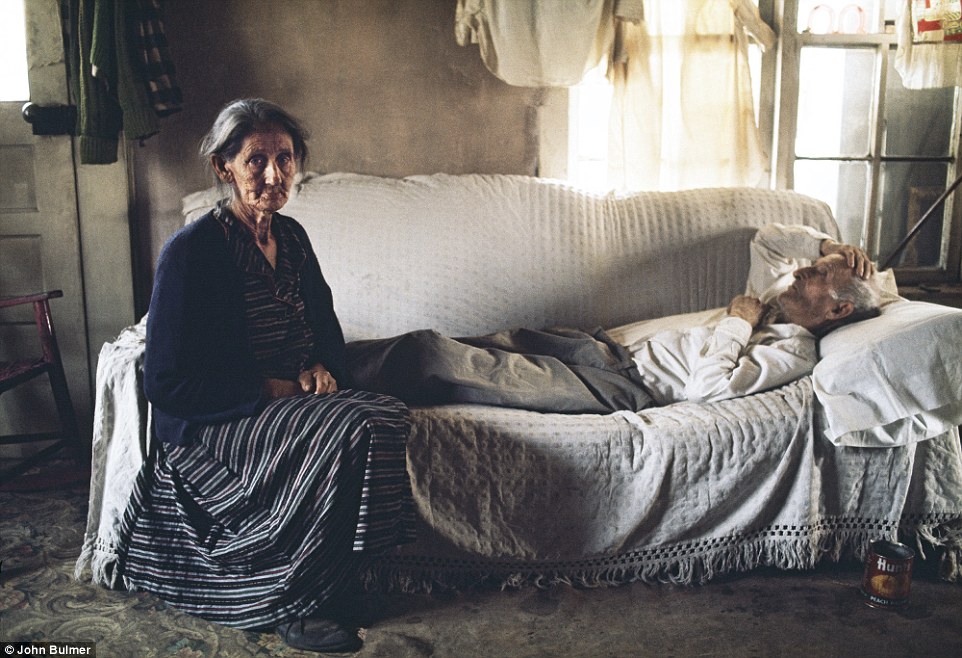 Pike County, Kentucky, 1967. A couple shot for a photo essay on white poverty. ‘When I knocked on doors, I was often greeted by the barrel of a shotgun as the owner opened the door a crack. The mining companies were strip mining the hills and leaving their farms and streams polluted. Despite that, last year 80% of Pike County voted for Trump,’ John Bulmer wrote on his Facebook page last December 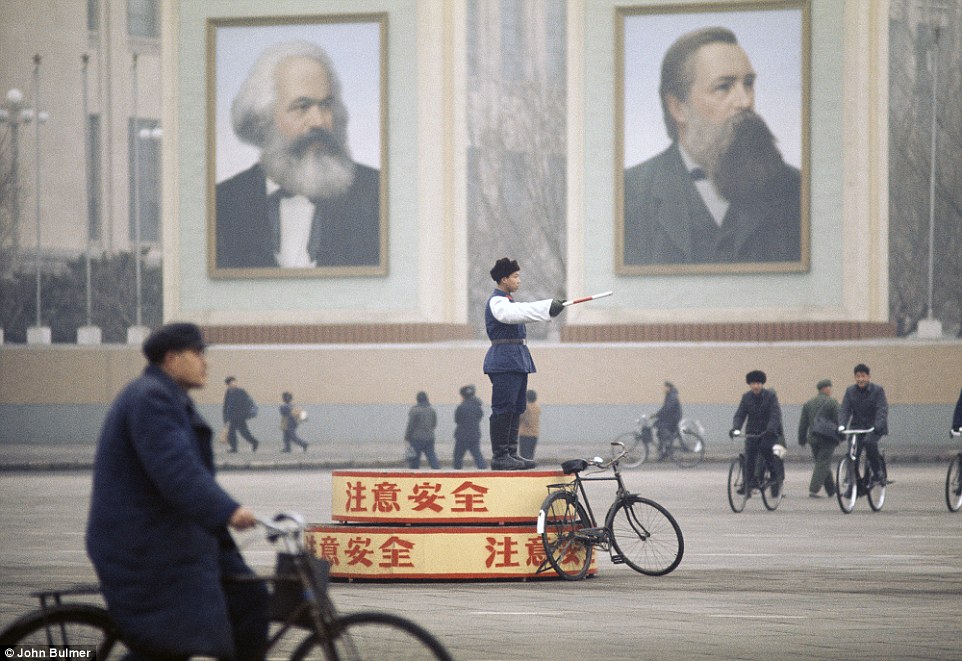 Beijing, China, 1973. At a time when a photographer would often not know for many weeks, or even months, whether they had successfully captured the image they had seen in their mind’s eye, timing was everything. Bulmer was a master of this