Morning rain drips down the round blue plaque. ‘Clement Richard Attlee. 1883-1967. Prime Minister lived here,’ it says. I’m in Monkham’s Avenue, outside the mock-Tudor home of Britain’s most radical, and successful, Labour leader. It’s in the Chingford and Woodford Green constituency, currently held by Iain Duncan Smith with a perilous 2,400 majority.

The current owner of the property prefers not to discuss the upcoming Election. But neighbour, solicitor Hale Wheeler, isn’t so reticent. ‘I voted Remain. But I’m absolutely terrified of Jeremy Corbyn. I’m voting Conservative,’ she says.

Half-an-hour from Liverpool Street station, Chingford bravely battles for independence from inner London. As the train crosses the North Circular, grey tower blocks yield to the neat semis, extensions and well-maintained garden sheds of English suburbia. But it’s a battle that’s slowly but surely being lost.

‘Things have changed,’ says local Tory councillor Roy Berg, as we walk along Station Road. ‘The NatWest used to be a dance hall. And that…’ – he points to the Plush Couture bridal shop – ‘was my dad’s builders’ yard.’ 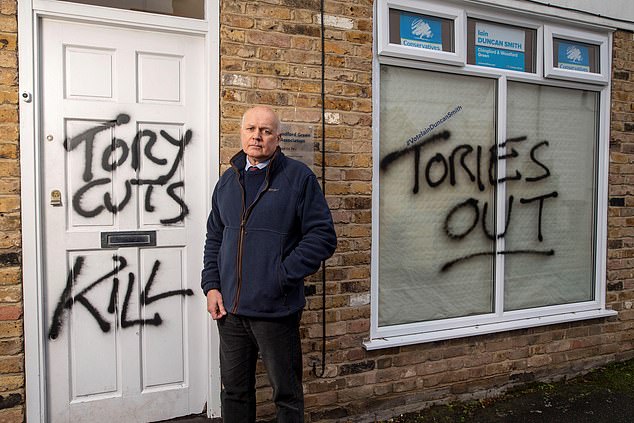 Pictured: Iain Duncan Smith outside his constituency office which he found vandalised

When Duncan Smith was first elected in 1992, replacing Norman Tebbitt, he won with 60 per cent of the vote. But the demographics of the seat have evolved dramatically. Boundary changes have combined with an influx of younger voters from areas such as Hackney and Islington. Which means the former Tory leader is now facing a ferocious challenge from economist Faiza Shaheen, and her well-motivated supporters from Corbynite activist group Momentum.

Shaheen’s campaign is based in a small office on Hatch Lane. On the day I arrive, tensions are running high following a vandalism attack on Duncan Smith’s HQ, and an avalanche of social media messages so abusive that he’s being given police protection for Election night. As I knock, a face peers out, before the door is slowly opened. Meriam, the press officer, politely but guardedly informs me an interview may be possible. Where are the strong Labour areas, I ask her. ‘Everywhere,’ she replies.

Not quite. ‘I’ll be using the blade now, sir,’ says Perry Ward, as he runs his cut-throat razor expertly around the base of my neck. Located two doors down from the Labour offices, he and his partner Owen have been cutting hair in Chingford since the 1970s. ‘We get everyone,’ he explains, ‘dustmen and millionaires.’ How will he be voting? ‘Iain Duncan Smith. I like him. He’s a statesman. Some of them have a lot to say. Not him.’

THE quiet man of British politics is indeed slightly reticent, and self-conscious, when we meet. As I pour tea in the Belgique Cafe in Woodford Green, we’re constantly interrupted by people grasping his arm wishing him luck. ‘It’s been like that since the Election was called,’ he tells me. ‘To be honest, it gets a little embarrassing.’

This diffidence would surprise Duncan Smith’s critics. They caricature him as the Brexiteering neo-Thatcherite who, when he was Work and Pensions Secretary, launched a vindictive crusade against the poor via his Universal Credit reforms.

But I know from previous conversations that his passion for eradicating social injustice is real.

He resigned from the Government when he could ‘no longer abide what they were trying to do’ on disability cuts. And although a committed Leaver, he expresses frustration at the way Brexit has sidelined his reform agenda.

‘I remember saying to Cameron, ‘I was here during Maastricht. Let me tell you what you’re about to unleash on Britain. It will eat us all alive. There’s no going back.’ And he said to me, ‘No, no. I’m not going to let Brexit dominate my legacy.’ ‘

Chingford split 50-50 in the referendum, slightly negating the potency of the issue compared to other constituencies. But there’s an element of the Election that does inflame IDS’s passion: what he describes as an ‘invading army’ of Momentum campaigners.

‘Very few of them live here,’ he says. ‘And they’re ideologues. They don’t see people are really fed up with the incessant banging on doors. They don’t have sensitivity to the fact that when you’re on the doorstep at 8.30 at night, people don’t want to answer the door.’ 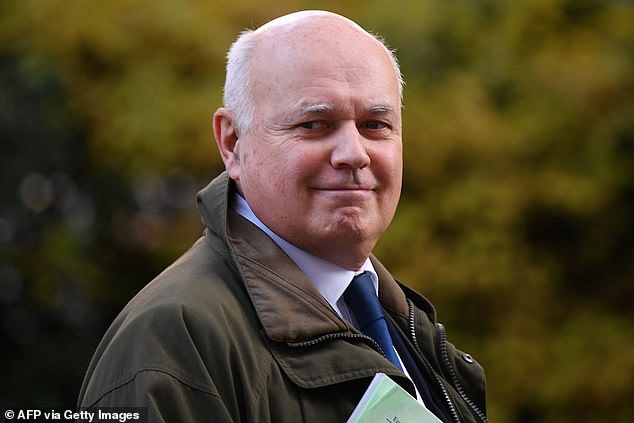 When Duncan Smith was first elected in 1992, replacing Norman Tebbitt, he won with 60 per cent of the vote, writes Dan Hodges

I set out to follow, with more subtlety, in the footsteps of this marauding horde. At the old Walthamstow dog track, the Tote board still stands ready to display the odds. But the greyhounds have run their last race.

Sarah, an exhibition and events manager, moved into one of the site’s new-build flats two-and-a-half years ago. She’s concerned about London’s housing crisis and likes Faiza Shaheen. ‘She understands what matters to people around here. I’ll be voting for her,’ she says.

A significant number of Shaheen’s campaigners may well be directed remotely by Momentum’s WhatsApp controllers. But the candidate was born and brought up locally, and it’s a key element of her pitch. She tells me: ‘This morning I went back to my school, Chingford Foundation. My old teacher Mr Mahir is still there. This is the one place I could stand with authenticity. I wouldn’t want to contest another seat.’

A committed Corbynite, she’s honest enough to acknowledge his leadership is an issue on the doorstep, though claims this is balanced by antipathy towards Boris.

But she rejects criticism of the Absolute Boy’s true believers. ‘People have this image of Momentum, but they’re basically talking about a group of teenagers and grandparents. The mass canvassing and rallies have created a sense of excitement. Growing up here, it felt like nothing ever happened, but it is now. This campaign is the most beautiful thing I’ve ever been part of.’

Shaheen doesn’t fit the model of the snarling class warrior. She’s friendly and engaging, and seems slightly overawed at finding herself at the heart of a General Eelection campaign. Only once, when discussing her mother – ‘She named me Faiza because it means winner’ – do I glimpse cold Corbynite steel. ‘She had her disability benefits reassessed. I’ve seen first-hand the indignity and inhumanity of these policies. How they hurt people. I can’t sit here and pretend the pain they cause isn’t real.’

As this campaign nears its conclusion, the fight in Chingford is being replicated across dozens of seats. And with polling day in sight, the parties are shifting from the media ‘air war’ to the voter mobilisation ‘ground war’.

The perception is that Labour’s youthful activist base enjoys a major advantage. But if they do, it may be double-edged. Many of the campaigners who flood these streets at weekends are from outside the constituency. I was told you can spot them from the way they walk, heads bowed, as they follow their smartphone satnavs.

This, in turn, creates a negative reaction on the doorsteps. The lack of targeting – resulting in Tory supporters receiving repeat visits from Momentum activists – was referenced by voters I met. They find it intimidating. Unlike Conservative canvassers, Momentum don’t enforce a 7.30pm cut-off.

Faiza Shaheen may view this campaign as beautiful. But sadly a large number of her would-be constituents don’t. Out here in suburbia, they’re scared. When I followed Duncan Smith canvassing, I lost count of how often he was approached with the same message: ‘Corbyn terrifies me. You have to stop him.’ Rightly or wrongly, Momentum’s flash-mob tactics are giving form to that fear.

As we finish tea, Duncan Smith tells a story. ‘When Nye Bevan gave his famous quote saying Tories were lower than vermin, Clem Attlee wrote to him, saying, “I’m a bit worried about your comments. I think it lessens your position. That isn’t what we think of the opposition.”‘

If the former resident of Monkham’s Avenue was still leading the Labour Party, I suspect Faiza Shaheen would be heading for Westminster. But he’s not.