Chelsea, Tottenham Hotspur, Leicester and AFC Bournemouth are all holding their festive bashes for junior members in term time over the next two weeks.

The four teams all have open ballots for supporters to apply, but those who are successful will have to choose between not meeting their idols or skipping lessons. 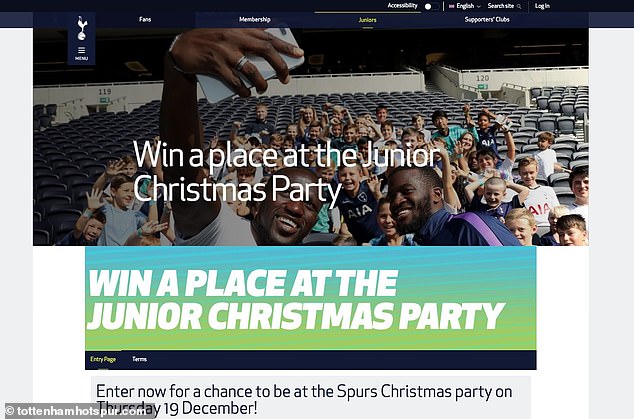 All four of the parties take place before Christmas holidays, with most schools finishing on Friday, December 20.

This means parents who cannot get the headteacher’s permission to take their child out of school during term time could face a £60 fine from the council.

When your child can miss school

You can only allow your child to miss school if either:

There’s extra support available if your child cannot go to school for long periods because of a health problem.

You have to get permission from the head teacher if you want to take your child out of school during term time.

You can only do this if:

It’s up to the head teacher how many days your child can be away from school if leave is granted.

You can be fined for taking your child on holiday during term time without the school’s permission.

One parent said: ‘It’s not fair to make them have to pick between an exciting opportunity and their education.

‘Why can’t the clubs do it at the weekend, so it’s fair for everyone. My son would love to go if he was lucky enough to win. But then he’d have to miss his school play.’

The club’s website reads: ‘It’s the biggest event of the year for Junior Blues and entries are now open for the Christmas Party!

‘Lucky Junior Blues will get to hang out and play games with the full Chelsea squad at Stamford Bridge in the run-up to Christmas.

Tottenham’s will be held on Friday, December 20 having originally being set for the previous day.

Their invite reads: ‘Being a Junior member is all about those special Spurs moments – and the Junior Christmas Party is always one of the highlights on the calendar.’

The do will allow fans to mingle with stars like Harry Kane and Dele Alli at the club’s training ground.

Start times have not been announced for either but even late afternoon starts would leave young fans – particularly living far from their clubs – having to miss class. 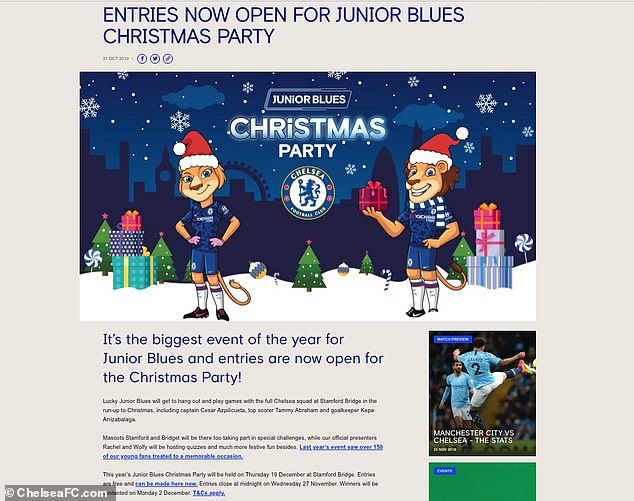 Chelsea’s Junior Blues party takes place on December 19. The club’s website reads: ‘It’s the biggest event of the year for Junior Blues and entries are now open for the Christmas Party!’

Leicester City’s is being held at the King Power Stadium this Wednesday – hosted by club mascot Filbert Fox.

The website reads: ‘Young supporters can have Christmas all wrapped up with an invite to this year’s Junior Foxes Christmas Party, featuring Filbert Fox and Santa.

‘As well as having Filbert as their host, guests can expect party games and lots of special surprises.

‘There will be competitions to win extraordinary stocking-fillers, and every child will receive their very own goodie bag.’ 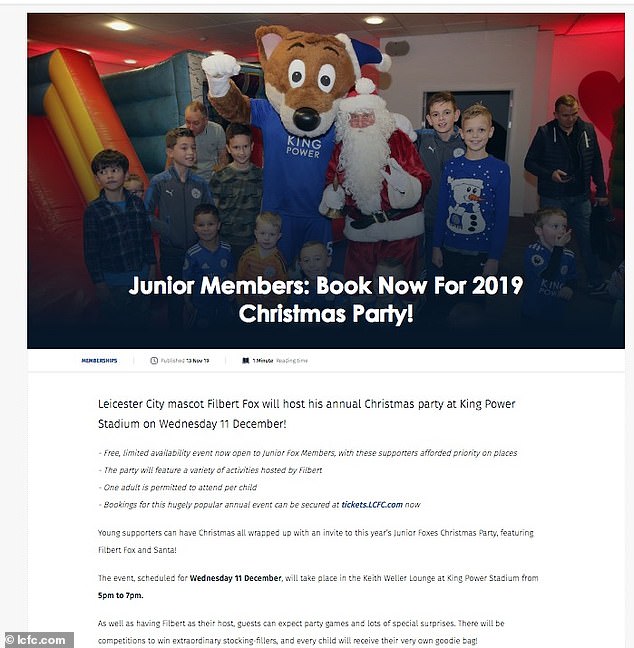 It is set to start at 5pm which would still leave most fans having to miss part of school to get there in time.

The same is the case for Bournemouth’s which is being held on Tuesday, December 17 at 4pm at the Bournemouth International Centre.

‘Eddie Howe, Jason Tindall and the AFC Bournemouth first-team squad will be guests at the annual Junior Cherries Christmas Party,’ the website reads.

‘Eddie, Jason and the players will be there to celebrate and sign autographs as well as taking part in a question-and-answer session at the beginning of the event. 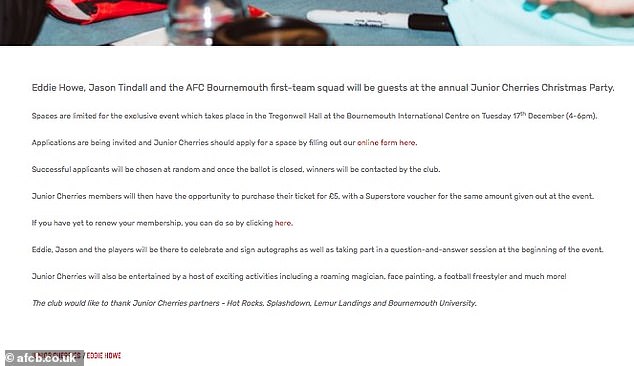 Bournemouth’s party which is being held on Tuesday, December 17 at 4pm at the Bournemouth International Centre

‘Junior Cherries will also be entertained by a host of exciting activities including a roaming magician, face painting, a football freestyler and much more.’

A Tottenham spokesman said: ‘The Junior Christmas party has become a tradition at this time of year for the Club and we always strive to find the optimum date around school term times and the busy festive fixture schedule.

‘This year the event will take place on a date where some local schools will have already broken up for Christmas holidays, while many others will be having a half day to mark the final day of term time.’

Chelsea, Leicester and Bournemouth have all been approached for comment.