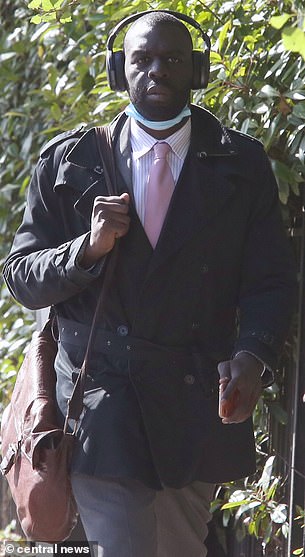 A former BBC broadcaster ‘gaslighted’ his ex-lover and tried to convince him he was mentally ill in a six-month campaign of harassment.

Ebunolu Akintade, 38, became obsessed with estate agent Tom Chandler and stalked him for months after their breakup last August.

Akintade told his ex he must be suffering from mental health issues and tried to undermine his grip on reality – a technique known as ‘gaslighting’ – which left his victim feeling trapped, Hendon Magistrates’ Court heard.

Despite Mr Chandler ending the relationship in August 2019, Akintade wouldn’t leave him alone and received a police caution for harassment in September.

He told Akintade to leave him alone in February this year when they bumped into each other at a bar in Soho, but the mental health coordinator sent him the anxiety remedy Ashwagandha in early March with a note saying ‘See you at the end of your course in 60 days, your mental health matters.’

Later that month, Akintade copied Mr Chandler into a ‘ranting’ email to the police arranging an appointment to give his fingerprints, and the next day he emailed Mr Chandler saying he had booked him a therapist and paid for six sessions.

Mr Chandler told the court: ‘I feel like he was using my mental heath, telling me I had mental health problems to control me.

‘He insisted on coming to the doctors with me, I couldn’t say no. He suggested I go and see a counsellor, I felt I had no choice.

‘It was just wearing me down, I didn’t know what was happening.’

Akintade, a former Dulwich College pupil, was convicted of stalking and harassing his estate agent ex-boyfriend between November 2019 and April 2020.

He will be sentenced on August 7 at Westminster Magistrates’ Court.

Akintade had worked for Radio Jackie as a traffic reporter then a showbiz interviewer. He moved onto BBC Radio London in 2011, having worked as a researcher for a BBC documentary ‘Trauma’ following doctors and nurses on 12-hour shifts. 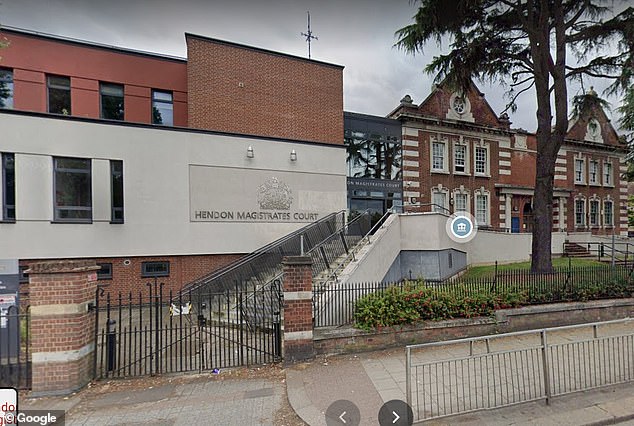 Mr Chandler had told the court the police came to his office on December 15 because earlier that month Akintade ‘turned up’ there and approached his deak.

‘He said ”I love you, I want to help you. Why won’t you listen to me? I’m doing it for all the right reasons, why won’t you believe me?” ‘

Mr Chandler said when he realised what Akintade was doing ‘the penny dropped and I didn’t want anything to do with him’.

He added: ‘I feel he was trying to break and control me and pretend he’s caring, he told me that his ex-partner had committed suicide and implied it would happen to me.

‘I contacted his ex-partner and he said [he] was well. I think he has a dark personality.’

Akintade wrote Mr Chandler a letter on October 13 begging him to ‘make the leap’ and not to shut him out.

The note read: ‘I love you and we can do this, hurt people – hurt people and I want you to stop hurting.

‘Please I beg you, to make the leap. I accept this is totally confidential. I’m on your team, more than anything I love you, please do it, don’t shut me out.’

Prosecutor Neehal Patel said Akintade was not a medical expert and Mr Chandler had told the court he did not suffer from mental health issues.

‘He had counselling, nothing was wrong, he was quite forthcoming. There were no suicidal thoughts,’ the prosecutor said.

‘The reason he contacted the police was the unwanted contact, he got too much for him, he felt gaslighted and trapped in the relationship. His contact was unwanted and was upsetting.’

Akintade had also turned up at Mr Chandler’s office unannounced on November 29 following the London Bridge terror attack, saying he wanted to ‘smooth things over’.

Mr Chandler told his ex ‘you’re sick leave me alone’, but Akintade waited on a bench outside the office for two hours.

Mr Chandler accidentally called Akintade while showing the police his phone and was ‘bombarded’ with calls and messages the following week.

Mr Chandler added: ‘It has been the worst experience of my life, I just have been constantly bombarded.

‘He’s unpredictable, I’ve been distressed, mixed emotions, how has it even come to this?

‘I have to look out if I catch the tube, I’m always on edge if I get an email. Is he going to turn up? It’s unpredictable, I’m on edge all the time.

‘Previously I had tried to end the relationship saying I wasn’t happy in the way he was treating me, I previously had said if it doesn’t stop I will end it.’

Magistrate Edward McMallan said: ‘Mr Chandler made clear his intention to break it off in August.

‘When he visited his office he was told to ”f*** off”, the only encouragement he may have had was an accidental call on 14 December.

‘By the police interview he could have been in no doubt. Following the meeting in a bar his subsequent actions were not reasonable to any extent.’

Akintade, of Croydon, was convicted of harassment and stalking after trial.