Former South Korean presidential hopeful is ACQUITTED of raping a female aide several times, in a blow to the country’s #MeToo movement

A former South Korean presidential contender has been acquitted of raping a female aide several times, prompting immediate protests outside a court in Seoul.

Ahn Hee-jung had been widely seen as a strong candidate to replace President Moon Jae-in when his term ends in 2022, but resigned from his post a regional governor within hours of the public rape allegations in March.

Ahn’s secretary claimed in an interview on live television that her boss had raped her several times and that she couldn’t say no because of how powerful he was.

Today, Ahn was found not guilty of forced sexual abuse, sexual intercourse by abuse of authority and other charges by the Seoul Western District Court. 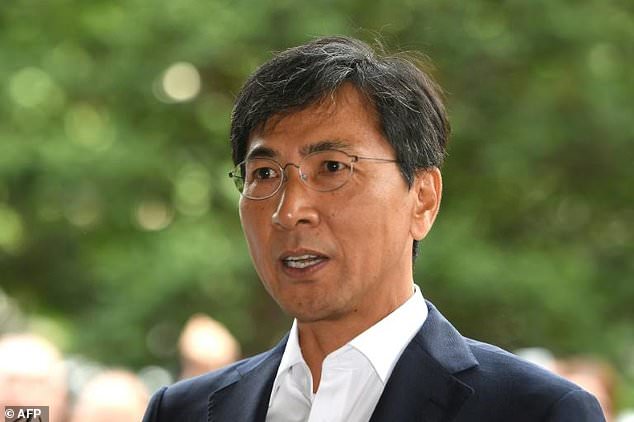 ‘I am sorry and I am so ashamed,’ he said on the courthouse steps.

‘I have disappointed many. I will make efforts to be born again,’ he went on, as women’s rights activists shouted ‘It’s not over yet!’ at him.

Ahn was governor of South Chungcheong province when his aide Kim Ji-eun told a television interview earlier this year that he had raped her four times after she was hired.

Fighting back tears, she said she had been unable to reject her boss in the rigid hierarchy of her office. 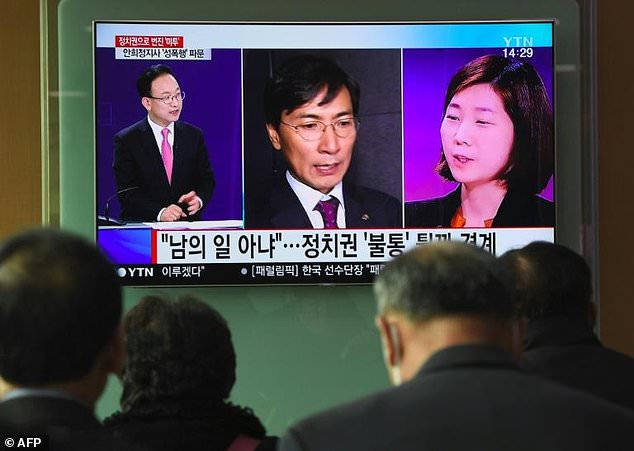 Allegations: Kim Ji-eun, seen right on a television screen, claimed Ahn had raped her several times and that she couldn’t say no because of how powerful he was

The 53-year-old politician issued a formal apology and stepped down from his post, and was later indicted, but has always insisted the sex was consensual.

The court said it saw ‘little evidence’ that Ahn used his authority to force Kim into sex, adding the evidence presented by the prosecution – which had demanded four years’ jail for Ahn – was ‘not enough to prove that Kim’s sexual freedom was violated against her will’.

‘There are also many things that were questionable and incomprehensible in the victim’s testimony,’ the court ruling said.

Tuesday’s verdict was delivered as dozens of women’s rights campaigners condemned Ahn while the politician’s supporters cheered for him outside the courtroom.

‘Repent, Ahn Hee-jung! What you did was sexual violence!’ the activists chanted in unison.

The scandal was an astonishing fall from grace for Ahn, who had enjoyed huge popularity among young, liberal voters thanks to his wholesome image and good looks.

He came second to the current head of state Moon Jae-in in the contest for the ruling Democratic Party’s presidential nomination last year and was seen as a favourite for the next elections.

The #MeToo campaign against the abuse of women swept the South this year after Seoul prosecutor Seo Ji-hyeon defied convention to appear on live television in January to speak out about the abuse she suffered at the hands of a powerful superior.

The move by Seo opened the floodgates, prompting more women to come forward to accuse powerful figures in politics, arts, religion, education and entertainment of abuse.