‘Heartless’ fraudster who stole from elderly hospital patients and spent more than £10,000 using a 91-year-old’s bank card is jailed for 12 years

A ‘relentless and heartless’ fraudster who stole from elderly hospital patients has been jailed for 12 years.

The thief’s crimes were only discovered through bank statements after one of her victims died.

June Weatherman, 56, sneaked into a room at Peterborough City Hospital and stole a bank card belonging to bedridden 91-year-old Mary Banks in September 2018.

She then spent more than £10,000, withdrawing cash from ATMs before visiting McDonalds, JD Sports and B&Q, Cambridgeshire Police said.

It was not until the following month that her crimes were uncovered when the victim’s son went through his mother’s bank statements after she had died.

Investigations revealed that Weatherman was responsible for the theft and fraud, as well as a number of similar offences in Norwich, York, Worcester, Kent and Sussex. 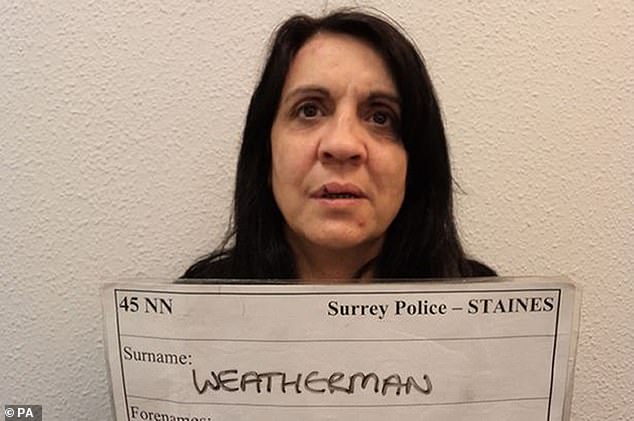 June Weatherman, 56, preyed on elderly hospital patients – sometimes pretending to be a nurse in order to steal their belongings

In November 2018 Weatherman claimed she was a nurse to two patients, both women in their 60s, at Worcester Royal Hospital.

One of the women asked her to leave her room and cancelled her bank cards when she realised they were missing while the other had jewellery and her purse, containing bank cards and £30 cash, stolen.

A nationwide hunt for Weatherman was launched in November 2018 and six months later she was found at a caravan park in Clacton-on-Sea, Essex.

Weatherman, of no fixed abode, was jailed at Huntingdon Law Courts on Friday after she stood trial earlier this month and was found guilty of nine counts of theft and five counts of fraud, Cambridgeshire Police said.

She was sentenced to 12 years in prison, a police spokesman said.

Weatherman has form for such offending, having been jailed for seven years in 2014 after she was convicted of stealing bank cards from elderly hospital patients and fraudulently spending thousands of pounds on them, police said.

Sergeant Lewis Busby, who investigated, described Weatherman as a ‘relentless and heartless offender who has shown no remorse for her crimes.’

‘She repeatedly targeted vulnerable adults in what can only be described as the most immoral of crimes.’

‘This was a long and complex investigation, involving officers from seven different forces.

‘I am incredibly pleased with today’s result and I hope it offers some closure to the victims and their families.’

Helen Harmeston, senior crown prosecutor of the CPS said Weatherman ‘ruthlessly preyed on hospital patients across the country, stealing money and bank cards and subsequently exploiting them for her own selfish gain.’