TWO DEAD IN 80-FT FLASH OF FIRE AT REFINERY

Two workmen died and two others were critically injured by a furnace explosion and fire at the Shell Oil Company's refinery of North Geelong late yesterday. 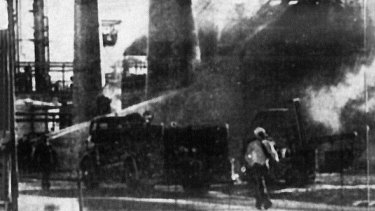 Fifty firemen waged a 15-minute fight to prevent the fire from spreading throughout the £30 million plant.

Those killed were Patrick Surgue, 36, of Drysdale Avenue, Geelong, and Ernest Smith, of Lethbridge.

The condition of Arthur Poole, 50, of McDonald Street, East Geelong and Jack Hume, 36, of Wendover Street, Norland, both of whom were badly burned, was critical last night.

The outbreak occurred at 4 10 p.m., on the side at B furnace of the crude distillation unit, in which oil is heated to several hundred degrees prior to distilling.

Workmen from other units said they heard a tremendous "whomp,"' and then saw flames leaping off the side of the furnace.

Mr Poole and Mr Hume, who were aloft on a catwalk of the furnace exterior, were killed instantly by the first flash.

Their bodies were found, still in position later.

A steel crane buckled with the heat and its 40-foot arm sagged slowly downwards as the metal melted.

The flashback left scorch marks 80 feet high on a chimney.

The flames ran on to 30-yard square concrete strip in a moving wall of fire until the emergency plan was put Into force and the flow of oil In the refinery was cut off.

Several hundred employees close to change of shift thronged to watch the firemen struggle with the blaze.

Some of them attached hoses to emergency plugs, and more than a dozen' hoses opened up against the fire.

The refinery fire chief (Mr Jim Tomkins) said last night it had yet to be considered how the outbreak occurred.

However, it is known a party of four were doing maintenance work on the outside of the distillation plant, and that an oxyacetylene torch was part of their equipment.

Last night a top-level conference was held at the refinery to try to find the cause of the fire and estimate the damage.

The 'Miami Vice' Star Who Played 2 Characters on 'The Sopranos'