Home » World News » From the Archives, 1965: Winston Churchill is laid to rest in Britain

The last act in the great drama of the life and death of Sir Winston Churchill has been played. The world has spoken its tributes in many tongues. Monarchs and statesmen have paid him honor. The solemn, measured pageantry of his State funeral has been enacted against the grey background of a London winter day. Now the guns and the drums, the bugles and trumpets are silent, and Sir Winston Churchill lies in the grave of an English country church near the place where he was born 90 years ago. 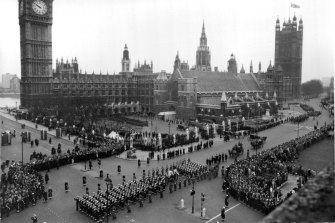 The funeral procession leaves Westminster Hall and passes through Parliament Square on its way to St. Paul’s Cathedral.Credit:British Official Photograph

Sir Winston Churchill’s death was not met with the shocked grief that follows a sudden tragedy. He was not snatched cruelly out of time. His life was rich beyond comparison or aspiration. Neither he nor the world was denied any of the array of achievements of which this amazing man was capable. Yet his death has stirred the world to a sorrow it has not felt for the passing of any other man. The mourning is the tribute of love that his greatness inspired.

The world mourns Churchill because it knows that he ensured the continuing promise of peace and freedom. Britain’s finest hour was almost the world’s darkest. When civilisation wavered before the power of evil 25 years ago, Churchill summoned the courage and energy of men and women who overcame the most horrible tyranny that has ever threatened the world; and the world was in his debt as it had never been to any man. 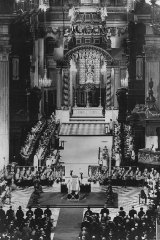 The reason for this debt is the central pillar of Churchill’s greatness. It is beyond imaging what would have happened to the world if this man had not been there at that hour. Some men have changed the course of history, and the echo of acclaim for the achievements still rings through the centuries. Churchill’s greatest achievement was to challenge and frustrate the foul attempt of other men to drag the world down into the primeval slime. Without Churchill, history might have been back where it began.

History has gone forward, and Sir Winston Churchill, who made history and wrote history, has not become part of history. Memorials will be raised to this unforgettable man, words poured out in his praise. But memorials and words will have no value unless the world pays Sir Winston Churchill the tribute of never again letting itself slide towards the cataclysmic disaster from which he saved it.