‘Beyond a joke!’: Furious flyers share pictures of huge passport control queues at Heathrow and Stansted and long 3.45am wait to get through security at Manchester as airport chaos continues

Passengers at Heathrow and Stansted bemoaned the substantial delays in the early hours, apparently due to a lack of staff on desks, while there was also disruption in Manchester.

In recent days, families have felt compelled to play it safe by arriving up to six hours in advance of their flights in order to avoid a repeat of the scenes witnessed at terminals up and down the country.

On social media today, one traveller wrote: ‘The lack of staff on passport control in arrivals is absolutely ludicrous @STN_Airport.’

Another tweeted: ‘Don’t seem like a coincidence that every time I go to @STN_Airport the E passport machines don’t work… been queueing for over 2 hours to get back in my own country.’

A third said: ‘Following a 6 hour flight landing at 4pm yesterday, waiting in a packed que at passport control for an hour with a child was hell on earth. One border officer at the desk for hundreds of families. #Heathrow should be ashamed & embarrassed.’

The Home Office has been approached for comment over the passport control delays. 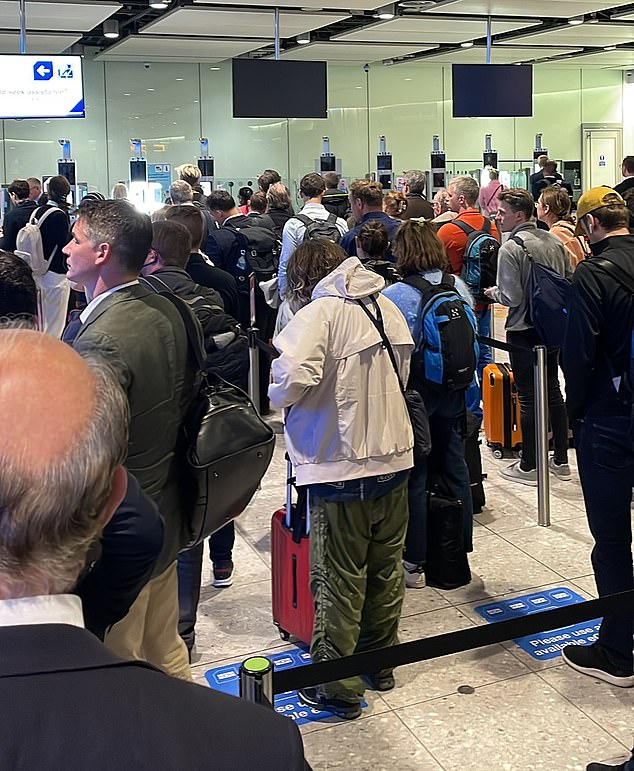 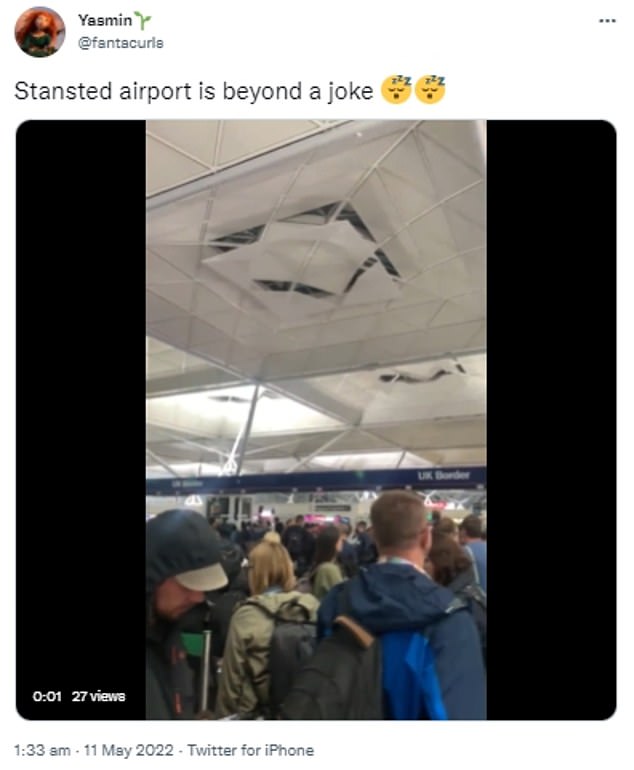 Meanwhile, the queues to get through the border at Stansted Airport were described as a ‘joke’

Airports up and down the UK continue to face staffing issues in the wake of Covid restrictions.

Travel chiefs say the issues have been exacerbated by a huge increase in demand for travel following two years of Covid-enforced disruption.

Some have warned the staffing issues, which came to a head last month as people rushed away for the first restriction free Easter Bank Holiday in more than two years, could last as long as a year.

And last week EasyJet announced plans to remove seats on some of its planes this summer so that it can operate flights with fewer cabin crew as it too battles staffing issues.

Bosses of both Manchester and Birmingham airports this week said the queues were due to the ongoing staffing problems.

It is also understood that Manchester has suffered additional problems, including passengers arriving up to six hours before their flight in the hope of beating the queues – creating bottlenecks at already busy times.

It comes as Heathrow reveals today that April was its busiest month since February 2020 – before the Covid pandemic – with nearly 5.1 million passengers travelling through the airport last month.

Increasing demand for air travel has also seen holiday giant Tui more than half its losses for the past six months.

It told shareholders it could return to profit by the end of the year as a result. 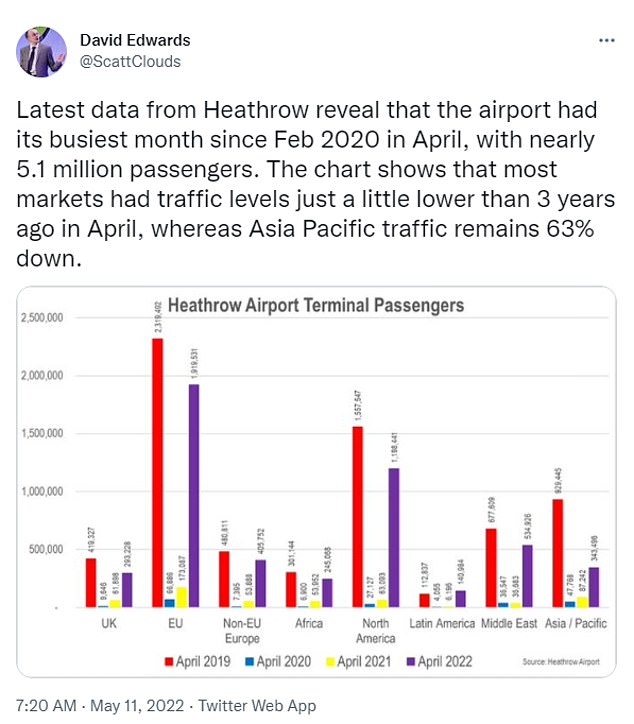 It comes as Heathrow reveals today that April was its busiest month since February 2020 – before the Covid pandemic – with nearly 5.1 million passengers travelling through the airport last month

Tui said it expects a ‘strong’ summer and has already achieved 85% of the booking levels seen in summer 2019, before it felt the heavy impact of the pandemic.

It said the latest quarter was ‘significantly improved’ as the easing of pandemic restrictions helped boost bookings.

The travel group said its UK operation ‘continues to lead the way’ for summer bookings, which currently show an 11% increase against the levels seen in summer 2019.

Tui said it expects overall bookings for the summer to ‘almost reach’ levels from 2019.

It has been buoyed by holidaymakers booking ‘more at short notice’ and also spending more money on each trip, the firm said.

Meanwhile, revenues for the past half-year increased more than five-fold to 4.5 billion euros (£3.8 billion) against the same period a year earlier, when the firm was still struggling with Covid-19 restrictions.

‘2022 will be a good financial year. Capacity almost reaches pre-corona level of 2019.

‘After two years of crisis, we expect Tui to become profitable again in the current financial year with a significantly positive underlying EBIT (earnings before interest and tax).

‘This is the basis for new growth.’