A £150 million cycle lane scheme has caused chaos in Bournemouth after it made a road too narrow for ambulances and fire engines to drive down without forcing cars to mount six-inch raised curbs.

Photos of the mayhem caused by the new road layout near the A347 show drivers risking serious damage to the underside of their cars by mounting the concrete barriers to get out of the way of emergency services.

The A347 Whitelegg Way, which is on a main route to Bournemouth Hospital, has been narrowed to make room for the cycle lanes.

The lanes forces ambulances to weave through traffic in rush hour and there are also visible tyre marks on the concrete kerb from where drivers were forced to mount it. 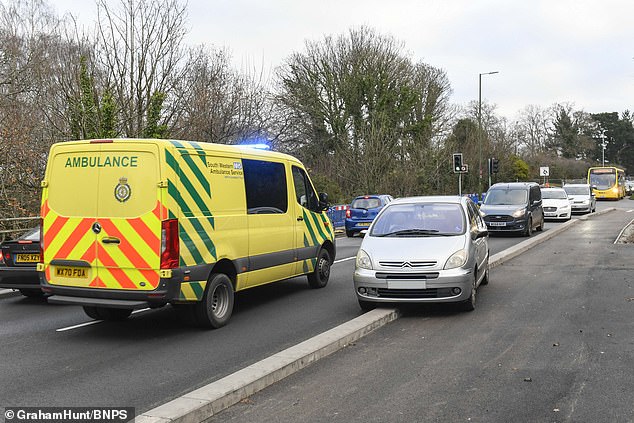 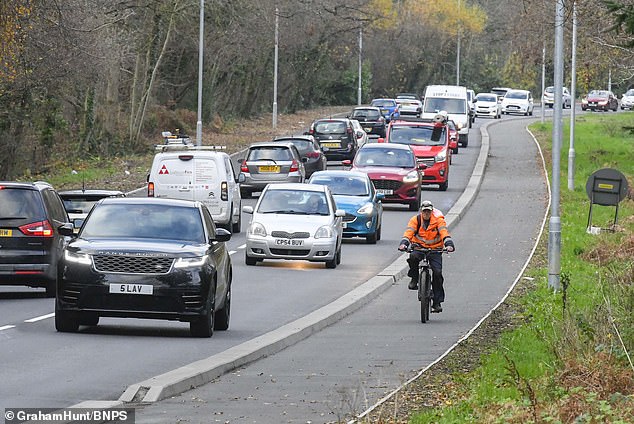 Last month a local firefighter broke ranks by warning that there was not enough room for fire engines to squeeze through.

The unnamed officer said: ‘Usually cars can part, even if it means bumping up on the kerb. The kerbs are massive now so they can’t do that.’

Stephen Bartlett, a local independent councillor, said: ‘In my view the new cycle lanes are a great example of how to waste millions of pounds of taxpayers’ money.

‘We now have problems that are entireley self-inflicted.

‘I had concerns that the road would be too narrow once the cycle lanes had been put in and I raised them before the work started. I don’t

think it is necessary to have cycle lanes on both sides of the carriageway.

‘I am not surprised (by the photos) as I am aware of concerns people have expressed on social media about the height of the kerbs and the problem with pulling out of the way.

‘I think it will hold up emergency vehicles and it could be a serious issue as the road is part of a main route to the hospital.

‘It would be highly unlikely that any changes would be made to the road now it has been built.’

Jean McLucas, from nearby Merley, posted online: ‘We have just driven down it and I feel rather claustrophobic as you are actually hemmed in by the high kerbs on the nearside.

Chris Edwards, from Bournemouth, said: ‘Not sure how a fire engine could get through if the traffic is solid both ways as the curbs are too high to drive up to clear the way. Total waste of money and creating a potential danger.’ 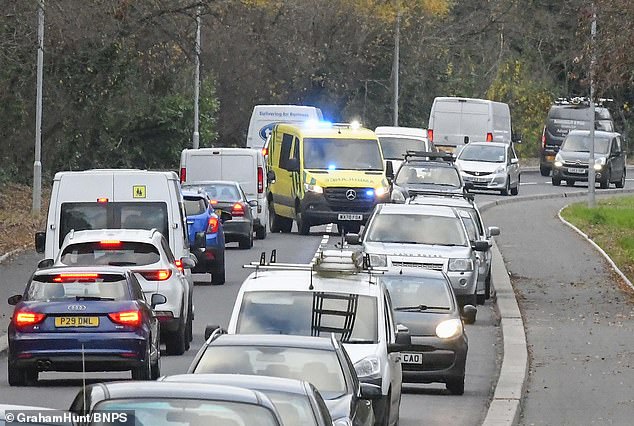 But a spokesperson for BCP Council insisted there was room for emergency vehicles to get through.

They said: ‘It is reassuring to see that vehicles are carefully moving to the side of the road creating space for the ambulance to pass. It is not necessary to mount the kerb and we would not advise any vehicle to do this.

‘The carriageway on Whitelegg Way is between 6.4m and 6.6m wide, adhering to current national standards set by the Department for Transport.

‘It is able to be used safely by all vehicles, including emergency services vehicles, and has undergone, and will continue to undergo, a number of independent road safety audits.

‘The Transforming Cities Fund programme team are working with the emergency vehicle operators and have not received any objections about Whitelegg Way.’