A litany of scandals has not stopped G4S pocketing billions of pounds from taxpayers over the last decade.

The world’s largest security company has been repeatedly exposed over failures in prisons, tagging, security services and patient transport.

It even botched the security of the 2012 Olympics leaving the Government to summon the Armed Forces to fill the gaps.

MPs called on ministers to rethink any future contracts as critics said the outsourcing giant had effectively become a ‘private army’ of the State.

The firm was then hit with a £109million bill after it was revealed it had overcharged the Government during a contract to monitor electronic tags.

Incredibly, senior staff continued to bill the taxpayer for watching over criminals who were dead, in prison or had left the country. 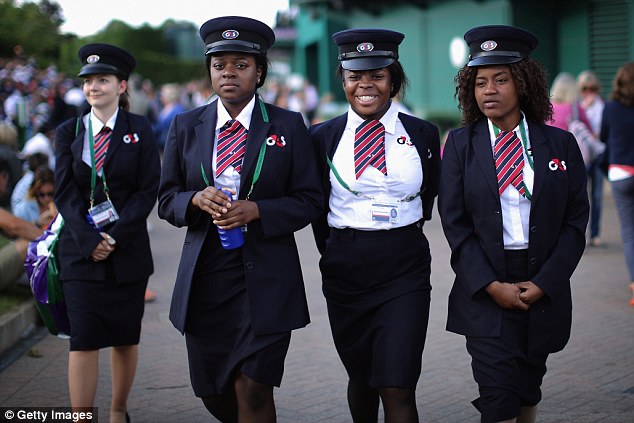 The world’s largest security company has been repeatedly exposed over failures in prisons, tagging, security services and patient transport (Security pictured at Wimbledon 2014)

But the high-profile and embarrassing problems appeared to have little to no impact on the company’s bottom line.

However, the collapse of rival Carillion wiped significant chunks off the share value off it and other public-sector contractors.

G4S was founded in 2004 following the merger of Group 4 Falck and Securicor, and can trace its roots back to a guarding company founded in Denmark in 1901.

The firm employs more than 600,000 people around the world, many in highly sensitive and specialist roles. But it has been embroiled in a series of humiliating blunders, the most high-profile of which was the failure to secure the 2012 Games in London.

The company was described as ‘totally chaotic’ after it failed to fulfil its £284million contract to run security at the Games.

The farce led to the departure of chief executive Nick Buckles.

It was also thrown into the spotlight over its record on the tagging of offenders. In one laughable case, bungling staff were revealed to have electronically tagged the prosthetic limb of a one-legged criminal.

In 2013 a G4S guard at Heathrow told Royal Navy engineer Nicky Howse to change out of her uniform before flying to the US because it could offend other passengers and was not safe.

Last October the company received ‘unprecedented levels’ of complaints after taking over a private ambulance service in Kent.

A report revealed it had 1,774 complaints since it began to transport patients unable to get to and from hospitals in Medway and Kent.