The Irish broadcaster Gay Byrne has died surrounded by his family aged 85 after a battle with cancer as tributes pour in for ‘a master and one-off, the likes of which we’ll never see again’.

Mr Byrne, who died in Howth near Dublin, is survived by his wife Kathleen and his two children.

‘We are all greatly saddened by the passing of Gay Byrne who has been a household name in this country for so many years,’ she said. 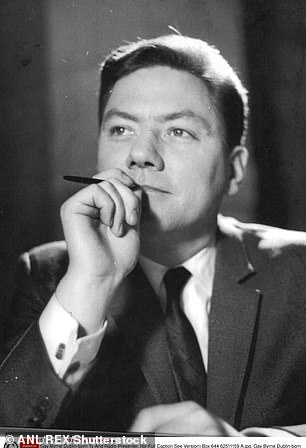 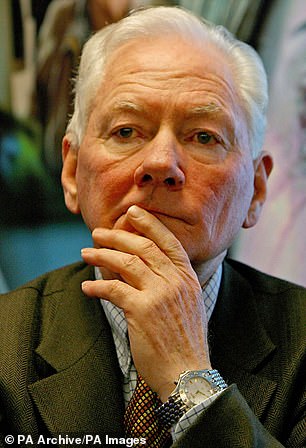 Ireland’s president Michael D Higgins, described Byrne as a man ‘of great charisma’ after hearing of his death 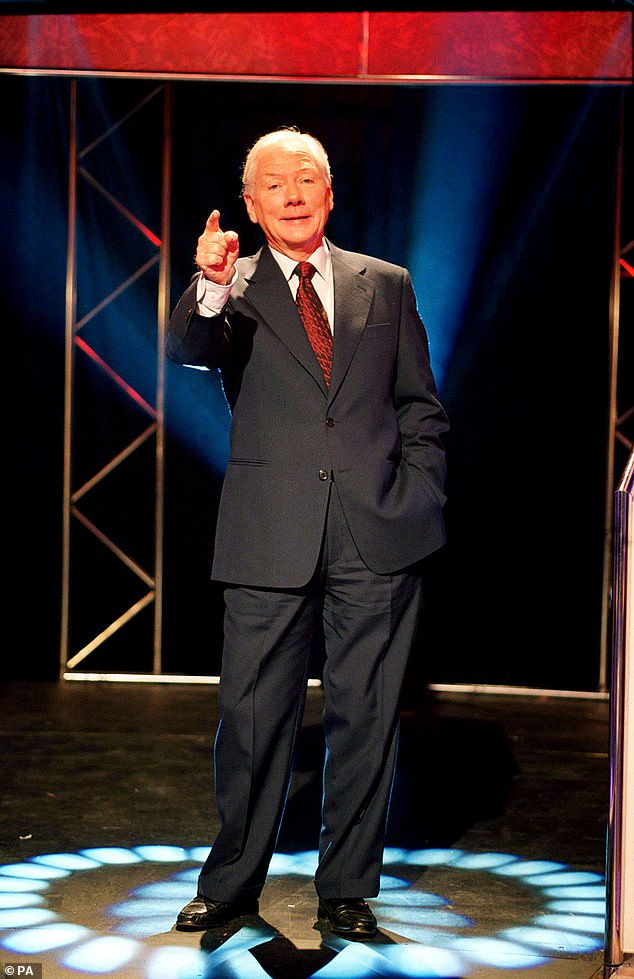 ‘Gay was an exceptional broadcaster whose unique and ground-breaking style contributed so much to the development of radio and television in this country.

‘Gay’s journalistic legacy is as colossal as the man himself – he not only defined generations, but he deftly arbitrated the growth and development of a nation.

‘Ireland grew up under Gay Byrne, and we will never see his like again. My deepest sympathies to Kathleen and his family.’

Though the program was only supposed to last six weeks, Mr Byrne took the show on to become an Irish cultural institution.

The show became a ‘safe space’ to discuss controversial and taboo issues in a country that was deeply conservative at the time.

Topics like the influence of the Catholic church, contraception, AIDS, homosexuality and abortion were all open for debate on Byrne’s show.

Guests included the Boomtown Rats, Sinead O’Connor and U2, as well as politicians like the President of Ireland and religious figures like the Archbishop of Armagh.

Ireland’s president Michael D Higgins, described him as a man ‘of great charisma’ after hearing of his death.

Mr Higgins added: ‘Gay Byrne was someone who exuded warmth and presence, who was possessed of effortless wit, charm and who had a flair for broadcasting.

‘This was combined with an innate gentleness as a person, professionalism and humour.

‘Through his work in radio and on television he challenged Irish society, and shone a light not only on the bright but also the dark sides of Irish life.

‘In doing so, he became one of the most familiar and distinctive voices of our times, helping shape our conscience, our self-image, and our idea of who we might be.

‘Beyond compassion, which he had in abundance, he had a sense of what was just.’

Taoiseach Leo Varadkar tweeted: ‘Gay Byrne was the most influential broadcaster in the history of the State, a much-loved figure who changed Ireland for the better in so many ways. I knew him when he was Chairman of @RSAIreland and saw the effectiveness of his campaign against the needless tragedy of road deaths”. 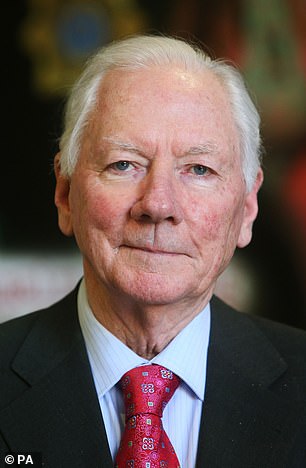 File photo dated 20 March 2014 of Irish broadcaster Gay Byrne has died at the age of 85 after a long illness, RTE said

He added: ‘On radio and on television over so many decades “Uncle Gaybo” provided a voice for all those who had been silenced or were afraid to speak up, and helped us confront things that needed to be changed. Ar dheis De go raibh a anam dilis (may his faithful soul be at God’s right hand).’

Mr Byrne appeared on his last episode of the Late Late Show in 1999, having been the host for 37 years.

Among other work, including the hosting of one season of Ireland’s Who Wants To Be A Millionaire, Mr Byrne hosted a series on RTE called The Meaning of Life. During the show he interviewed prominent Irish figures about life meanings and their beliefs.

Fianna Fail Leader Micheal Martin said: ‘Gay Byrne has left an indelible mark, not only on Irish broadcasting, but on Irish society as a whole.

‘Through his radio programme and TV shows, including his 37 years as host of The Late Late Show, Gay was a feature in Irish homes the length and breadth of the country. ‘

‘His intellect and emotional intelligence was unparalleled and his ability to sensitively approach delicate and sometimes controversial issues set him apart from other presenters.

‘Gay Byrne was a rare treasure who touched the lives, not only of his family and friends, but the hundreds of thousands of people who welcomed him into their lives and their homes on the radio and TV.’

Broadcaster Ryan Tubridy also paid tribute to Mr Byrne. ‘It is with enormous and profound sadness that I heard of the passing of my friend and mentor, Gay Byrne,’ he added.

‘He was the master, a once off and the likes of which we will never see again. 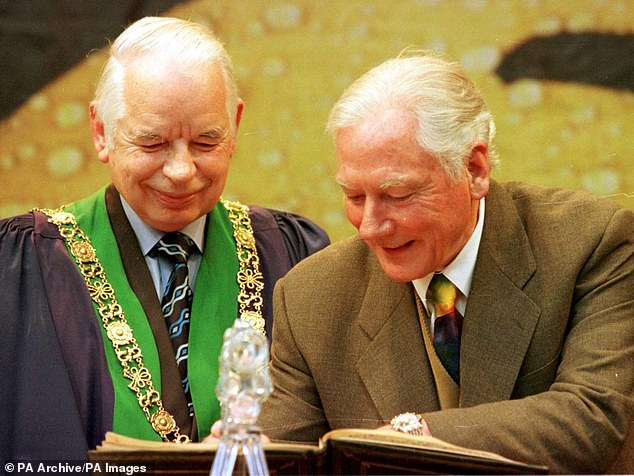 TV chat show host Gay Byrne signs the Roll of Honorary Freedom, with Lord Mayor Joe Doyle, after being granted the Freedom of the City of Dublin 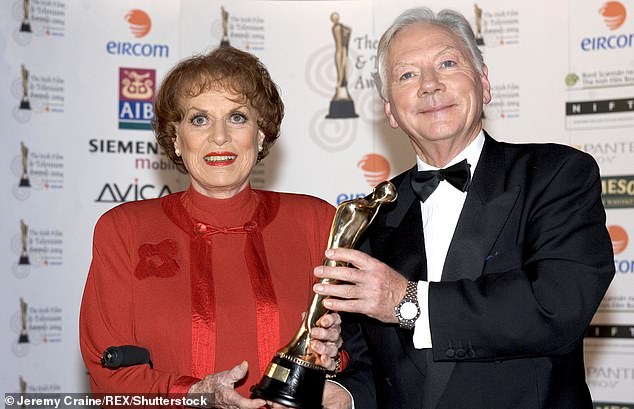 ‘I watched him as a child, worked alongside him as a young man and he guided me as I grew older and I will forever be indebted to him.

The RTE broadcaster and former Late Late Show host had been undergoing treatment for cancer. 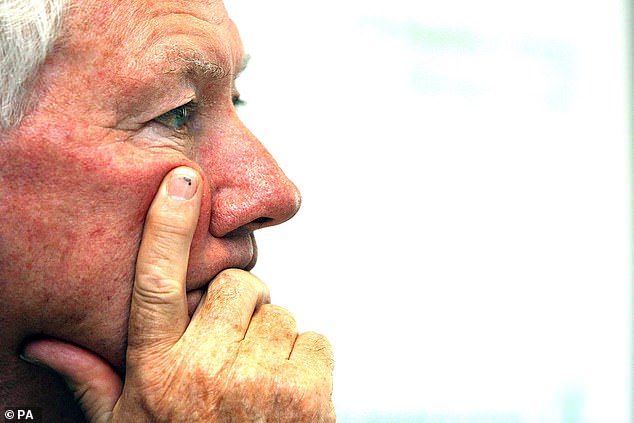 RTE Director-General, Dee Forbes, paid tribute to Mr Byrne. ‘We are all greatly saddened by the passing of Gay Byrne who has been a household name in this country for so many years,’ she said 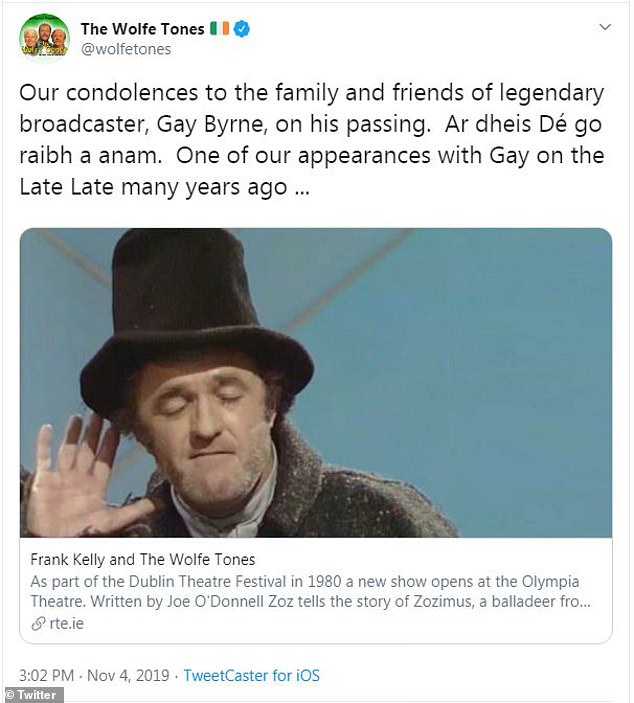 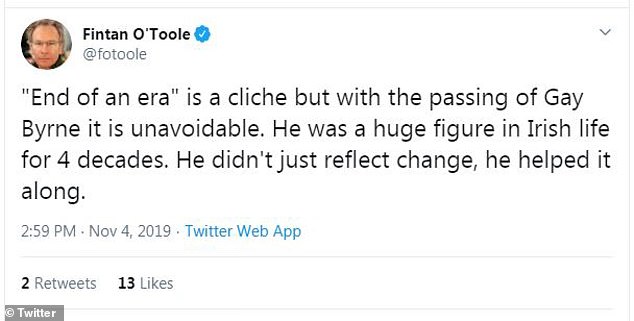 While official statements of commiseration have been pouring in, so have tributes on Twitter.

Piers Morgan called the late Byrne a ‘master of his craft’ while Republican band the Wolfe Tones shared a video of a performance they did with Byrne in 1980.

Columnist for the Irish Times, Fintan O’Toole said: ‘”End of an era” is a cliche but with the passing of Gay Byrne it is unavoidable. He was a huge figure in Irish life for 4 decades. He didn’t just reflect change, he helped it along.’ 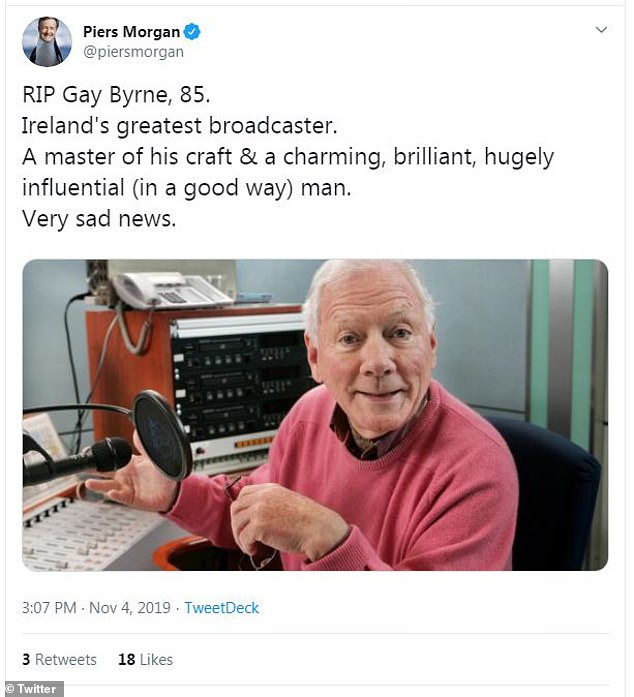