Anti-Semitic killer is sentenced to life in jail over 2019 attack on German synagogue: Gunman shot two people dead after failing to enter Jewish place of worship

An anti-Semitic killer has been sentenced to life in jail for an attack on a German synagogue on the holiday of Yom Kippur in 2019 which left two dead.

Stephan Balliet, 28, had posted a screed against Jews before launching an attacking a synagogue in Halle, eastern Germany, on October 9, which he live-streamed.

Balliet admitted that his intention was to get inside the synagogue and kill 51 worshippers celebrating the Jewish holy day, but was foiled by security measures designed to prevent just such an attack.

Stuck outside the building, Balliet shot dead a 40-year-old woman and then attacked a nearby kebab shop, killing a 20-year-old man and wounding several others. 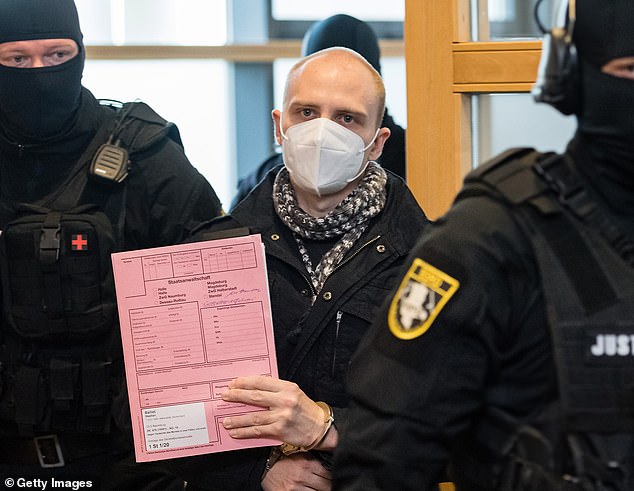 Stephan Balliet, 28, has been sentenced to life in prison in Germany over the 2019 attack on a synagogue in Germany which left two people dead 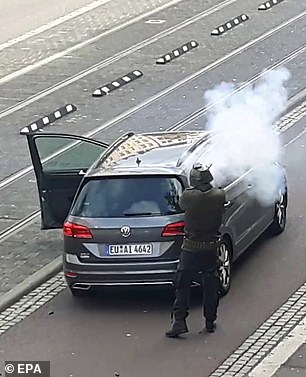 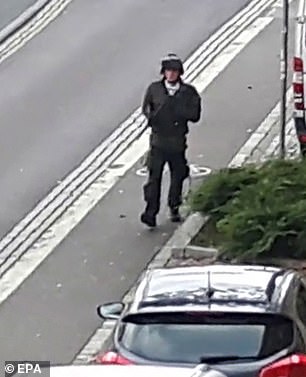 Balliet admitted attacking the synagogue (pictured left and right), calling Jewish people ‘my enemies’ while denying the Holocaust in court – which is itself a crime in Germany 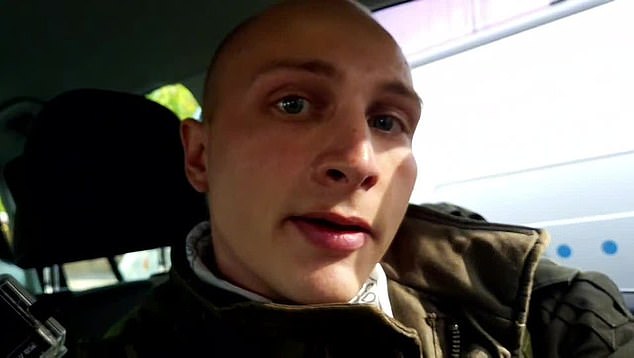 Inspired by the mosque shooting in New Zealand several months earlier, Balliet had streamed his attack live over a popular gaming forum (pictured)

During the trial, Balliet has insisted that attacking the synagogue was ‘no mistake’, adding that Jewish people are ‘my enemies’ while denying the Holocaust in open court – which is a crime in Germany.

However, he did apologise for killing the female passerby, saying that: ‘I didn’t want to kill whites.’

Judges at the Naumburg state court found Balliet ‘seriously culpable’ for the attack, a ruling that means he will effectively be barred from early release in 15 years.

Presiding Judge Ursula Mertens described the attack, viewed as one of the worst on Germany’s Jewish population in the post-war era, as ‘cowardly’ in her verdict.

A lawyer for nine of the co-plaintiffs, Mark Lupschitz, said the trial had been ‘fair’ and both ‘stressful and empowering’ for the intended victims. 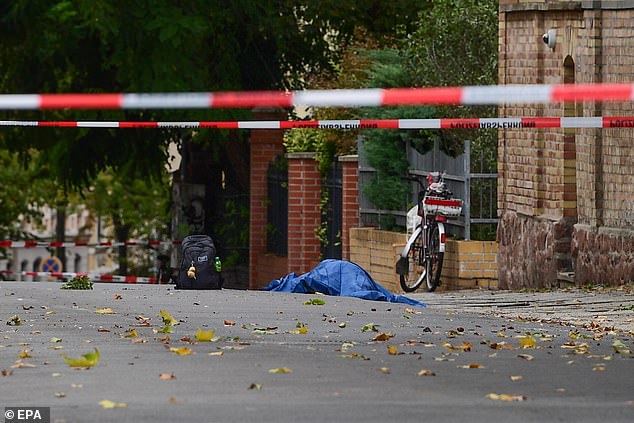 Balliet’s attack was partially foiled when he failed to get inside the synagogue, prompting him to shoot dead a passer-by – a 40-year-old woman (pictured) 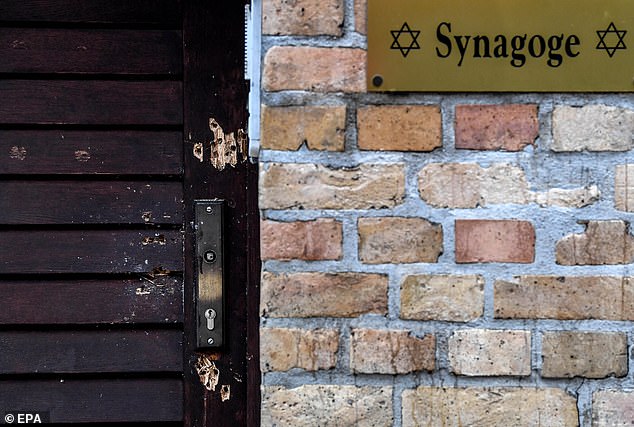 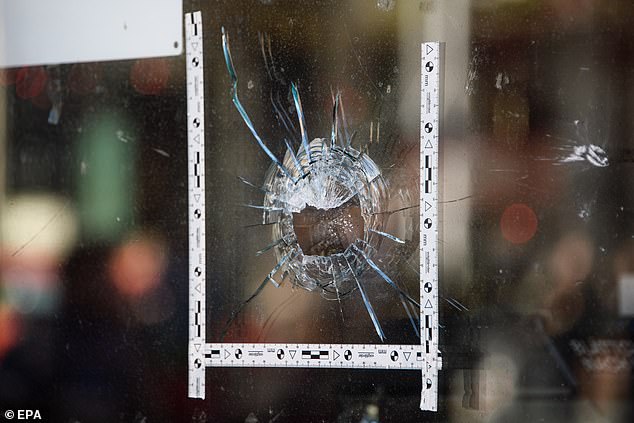 After shooting the woman dead, Balliet went to a nearby kebab shop (damage, pictured) where he opened fire again, killing a 20-year-old man and wounding several others

During the trial, Balliet insisted that ‘attacking the synagogue was not a mistake, they are my enemies’.

Dressed in military garb, he filmed the attack and broadcast it on the internet, prefacing it with a manifesto espousing his misogynist, neo-fascist ideology.

‘If that guy would have been able to get into a synagogue… it would have had a tremendous impact on German identity after the war and the fight against anti-Semitism,’ he said.

‘I hope and trust that the German court will do the right thing and make the right decision. Anti-Semitism is indeed a phenomenon that attacks the very democratic essence of Germany and I think that is the thing that is so important to protect.’

Prosecutor Kai Lohse said Balliet had acted on the basis of a ‘racist, xenophobic and anti-Semitic ideology’ to carry out an attack against not only those he killed but ‘Jewish life in Germany as a whole’. 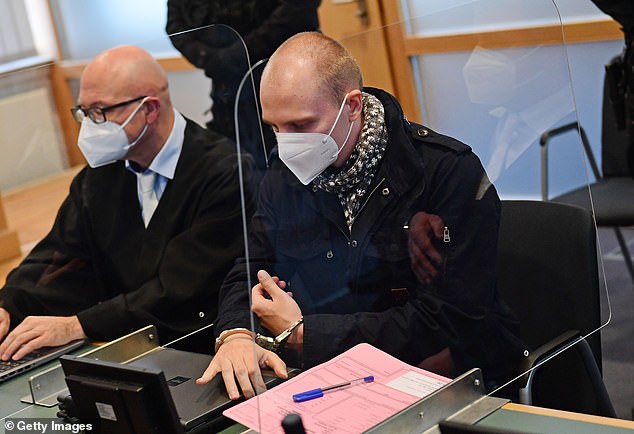 Balliet said during his trial that his only regret was shooting dead the 40-year-old woman, because ‘I didn’t want to kill whites’ 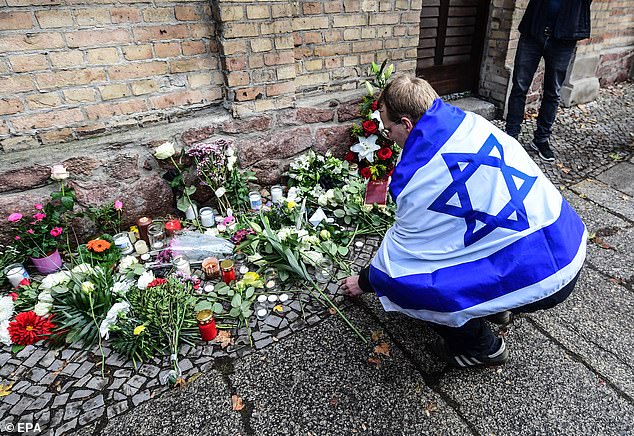 The events that unfolded were like a ‘nightmare’, he added.

‘At the end of this nightmare, the perpetrator murdered two people and injured and traumatised numerous others.’

The attack bore some of the hallmarks of two carried out and similarly live-streamed some months earlier in Christchurch, New Zealand by Brenton Tarrant, who killed 51 people. Balliet cited Tarrant as an inspiration.

The government’s point-man against anti-Semitism, Felix Klein, called the trial ‘a good opportunity to bring about debate in society about anti-Semitism’.

Crimes targeting Jews and their belief have risen steadily in Germany in recent years, with 2,032 offences recorded in 2019, up 13 percent on the previous year.

Meanwhile a string of far-right terrorist attacks have shocked Germany including the assassination of pro-refugee politician Walter Luebcke at his home in June 2019 and the murder in the western city of Hanau of nine people of migrant origin in February.

Baillet ‘described the fatal shots fired at his two victims in Halle without emotion’ and appeared disappointed that he had failed in his attempt to enter the synagogue, psychiatrist Norbert Leygraf said of the defendant in an evaluation.

He said Balliet suffered from symptoms of schizophrenia, paranoia and autism preventing him from having ’empathy with others’ while feeling ‘superior to others’.