New York: US President Donald Trump's personal attorney, Rudy Giuliani, called the president this week to reassure him that he had been joking when he told media outlets he had "insurance" if Trump turned on him in the Ukraine scandal, Giuliani's lawyer said on Wednesday. 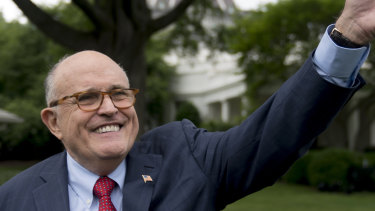 Rudy Giuliani, who was once considered America’s favourite mayor for leading New York City’s rescue efforts after the 9/11 terrorist attacks, is now caught up in the investigation over alleged improprieties in dealings with Ukraine. Credit:AP

The attorney, Robert Costello, said Giuliani "at my insistence" had called Trump "within the last day" to emphasise that he had not been serious when he said he had an "insurance policy, if thrown under the bus."

"He shouldn’t joke, he is not a funny guy. I told him, 'Ten thousand comedians are out of work, and you make a joke. It doesn’t work that way,'" Costello told Reuters.

Giuliani has already said that he was being sarcastic when he made the comments. Trump, too, has brushed them off, telling reporters in the Oval Office this week that "Rudy is a great guy." The White House declined to comment on Costello's remarks.

Giuliani has emerged as a central figure in the Democratic-led House of Representatives impeachment inquiry against Trump who is accused of abusing his office for personal political gain by pressing Ukraine to investigate former Vice President Joe Biden, a leading candidate for the 2020 Democratic presidential nomination, and his son, Hunter, a former board member of a Ukrainian energy company.

Current and former US officials have testified at the inquiry that Giuliani carried out a shadow foreign policy in Ukraine and that it became clear to them that a White House meeting between Ukrainian President Volodymyr Zelensky and Trump and a phone call between the two leaders was contingent on Ukraine carrying out Trump's wishes.

US ambassador to the European Union, Gordon Sondland, testified that Trump directed him, Energy Secretary Rick Perry, and former Ukraine special envoy Kurt Volker to work closely with Giuliani on Ukraine matters, a request that he viewed with alarm as Giuliani was a private citizen.

Sondland, a Trump donor, said Giuliani told him that Trump wanted Zelensky to make a public statement on investigating corruption, and was particularly concerned about probing Burisma, the Ukrainian energy company, and a debunked theory that Ukraine, not Russia, meddled in the 2016 US election.

Costello denied there had been any link between the investigations Trump sought and the White House meeting.

Trump, in an interview with former Fox News host Bill O'Reilly on Tuesday, sought to distance himself from Giuliani's activities on Ukraine, saying that he had not directed him to work on Ukraine matters.

"No, I didn’t direct him, but he is a warrior," Trump told O’Reilly, adding Giuliani "possibly saw something" and "he's done work in Ukraine for years."

Costello declined to comment on what directions Trump had given Giuliani on Ukraine, citing attorney-client privilege. He said there had been no change in Trump and Giuliani's relationship. "They speak all the time," Costello said.