A performance artist has been arrested for posing naked at a Catholic pilgrimage site in the French town of Lourdes.

Infamous provocateur and feminist Deborah de Robertis stripped off at the Sanctuary of our Lady of Lourdes on Friday.

Wearing only a blue veil on her head, she stood in front of a statue adorned with candles and placed her hands in a praying position.

Visitors were visibly shocked by her actions with one upset onlooker even trying to cover her with the veil. 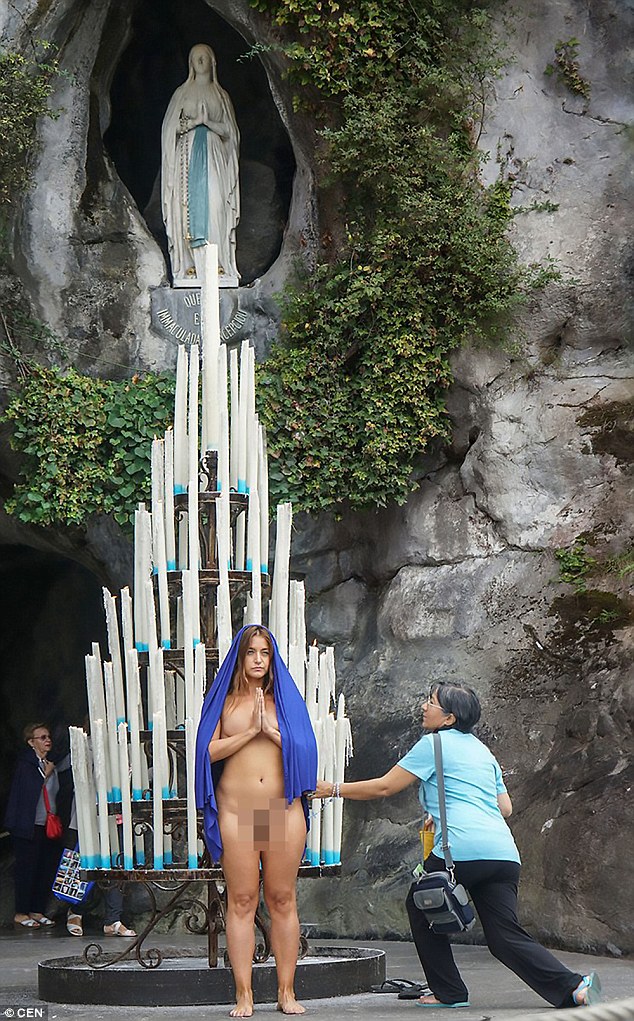 Controversial: Infamous provocateur and feminist Deborah de Robertis stripped off at the Sanctuary of our Lady of Lourdes on Friday

Police arrested the artist and placed her in custody for a couple of hours.

She has since been bailed to face a criminal trial next May charged with sexual exhibition.

Prosecutor Pierre Aurignac said: ‘The police were called by people on the spot, they arrested her and placed her in custody for a few hours.

‘The 34-year-old performer was ordered to attend the correctional hearing on 19 May to be tried for sexual exhibition.’

The Sanctuary of Lourdes also issued a complaint against de Robertis, calling police at the same time as the upset onlookers.

In a statement it said: ‘We deplore such contempt for religious conscience and freedom of worship.’ 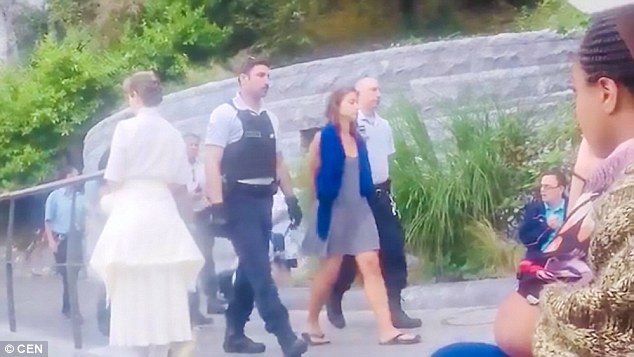 Our Lady of Lourdes is a Roman Catholic title of the Blessed Virgin Mary.

Lourdes is a pilgrimage site because Mary allegedly appeared there supernaturally in 1858.

It is not the first time de Robertis, who calls herself a ‘pro-feminist artist’, has hit the headlines accused of exhibitionism.

In October, she stripped naked in a similar performance at the Louvre Museum in Paris, next to the famous painting of the Mona Lisa, and faced court charges which were dismissed shortly after the trial began.

Speaking in court, de Robertis said that the performance was intended to ‘question the place of women in the history of art.’

The charge of sexual exhibition was dropped but she was given 35 hours of community service for biting a museum guard when he tried to remove her from the area.

Why is Lourdes a pilgrimage site?

In 1858, a 14-year-old peasant girl named Bernadette Soubirous reported a vision of the Virgin Mary in Lourdes.

Soubirous claimed she saw ‘uo petito damizelo’, ‘a petite damsel, in white with a golden rosary and blue belt fastened around her waist, and two golden roses at her feet.

In subsequent visitations she heard the lady speak to her, saying Que soy era Immaculada Concepciou (I am the Immaculate Conception), and asking that a chapel be built there.

At first ridiculed, questioned and belittled by Church officials and other contemporaries, Soubirous insisted on her vision.

Eventually the Church believed her and she was canonized by Pope Pius XI in 1933.

Lourdes now is a major pilgrimage centre, with more hotels than any other French city except Paris.