Google will ban ‘sugar daddy’ apps from its Google Play app store from September 1 this year, the firm has quietly revealed in an update.

Users are mostly older males, known as ‘sugar daddies’, and younger females (‘sugar babies’), although there are ‘sugar mummies’ too.

According to one young user, sugar daddy apps have earnt them a whopping £18,000 a month – enough to pay for their university degree.

At Cambridge University alone, over 1,000 students were sugar babies in 2019, according to Seeking Arrangement. 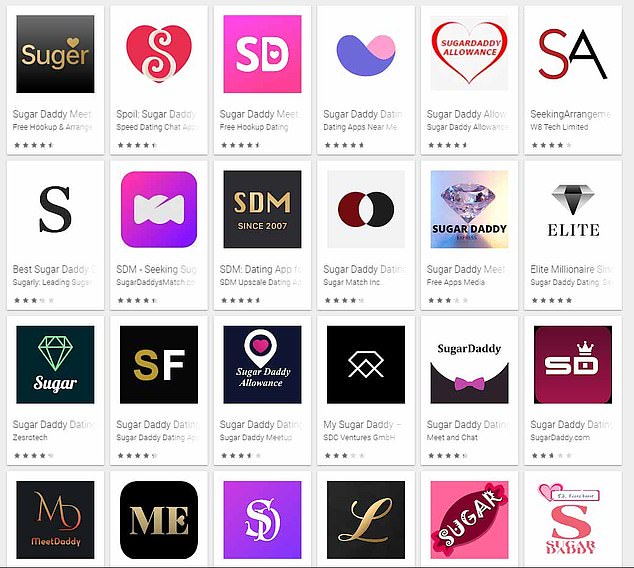 Examples of sugar dating apps include Spoil, SDM, Elite Millionaire Singles and Seeking Arrangement. Spoil calls itself the ‘secret arrangements dating app for sugar daddy and sugar mommy meet, chat, date and hang out, as well as sugar momma and younger men who are interested in cougar dating’

Google outlined the decision in a statement to Android Police, who first noticed the upcoming change.

‘As a platform we are always excited to support our developer partners, but we also work hard to provide a safe experience for users,’ the tech giant said.

‘We have updated our inappropriate content policy to prohibit apps that facilitate sexual acts in exchange for compensation following feedback we received from NGOs, governments, and other user advocacy groups concerned with user safety.

‘This aligns our policies with other Google policies and industry norms.’

In its update notice, Google also says that it wants to ensure that Google Play ‘remains a safe and respectful platform’ and so is ‘prohibiting content that is harmful or inappropriate for our users’.

Under its current definition of ‘inappropriate content’ that’s prohibited from Google Play, the firm lists apps ‘that promote sex-related entertainment, escort services, or other services that may be interpreted as providing sexual acts in exchange for compensation’.

One loophole of Google’s ban is it doesn’t affect standard dating apps, like Tinder and Bumble, through which sugar daddy arrangements could be made.

It also doesn’t stop sugar daddy app users from using the apps on their Android phones after September 1.

Apple already has a similar policy in force for the App Store, which bans covers ‘hookup’ apps that ‘may include pornography or be used to facilitate prostitution’ – meaning sugar daddy apps can’t be installed.

Google also revealed in the update notice that from September 1 it will be closing developer accounts after if they’ve been inactive for one year.

A woman has revealed how she makes $300 a day as a ‘sugar baby’ without ever meeting the ‘lonely’ older men who pay her.

The California-based 22-year-old, who goes by Callikoa, has racked up more than a million TikTok followers sharing her tips on how to be a sugar baby.

She revealed she makes money without ever even speaking to men on the phone and never discussing ‘anything gross’.

‘Yes I have a boyfriend, yes he does know about the sugar daddies, no I do not meet them so he doesn’t care,’ she says in one video.

‘I just get paid to text them. My boyfriend reads all the messages and we are in a healthy relationship, and he completely trusts me.’