GP surgery apologises after doctor ‘tells suicidal teenage girl, 16, to carry on cutting herself because she can’t get adult mental health care until she’s 18’

A GP surgery has been forced to apologise after a doctor allegedly told a suicidal 16-year-old to ‘carry on cutting herself’ – because she could only access help aged 18.

The worried parents of Jade Norris, now 17, claim they were given the advice after seeking help for their daughter, who self-harms and has made several attempts to take her own life.

Mother, Dawn Norris, and stepfather, Ben Garnham, from Bridgend, Wales, allege doctors and mental health professionals had refused to help the teenager as she is not old enough to receive adult mental health care. 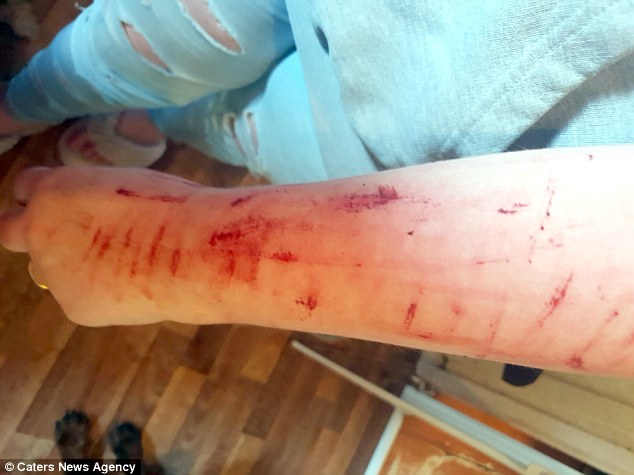 Jade started self-harming at the age of 13, after being bullied at high school, and since then has tried to take her own life on several different occasions.

The couple claim that because Jade is not yet 18, she falls into a ‘limbo’ age category – where she is too old for child mental health care, yet too young to be seen by adult mental health specialists.

The fraught parents are terrified the 17-year-old – who suffers from depression, body dysmorphia and gender confusion – could take her own life before she turns 18.

Mother, Dawn Norris, 41, a hairdresser, said: ‘We took Jade to the doctors because she continually self-harms. They basically told us that we have to ‘learn to cope’ with what Jade does. 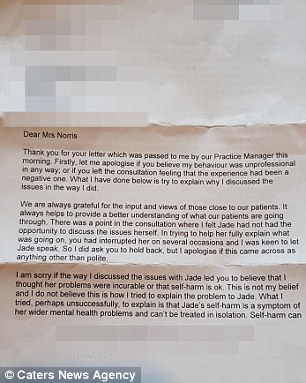 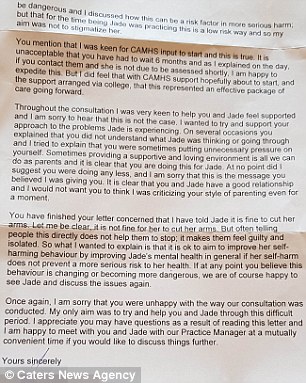 ‘The GP told us as long as she isn’t ‘cutting herself to death’ she should continue self-harming until she is old enough to see a proper adult mental health specialist.

‘What they told us was unbelievable – it’s madness.’

After filing a complaint with Oak Tree Surgery in Bridgend, Dawn and Ben received a two-page apology from Jade’s GP which stated: ‘I am sorry if the way I discussed the issues with Jade led you to believe that I thought her problems were incurable or that self-harm is ok. 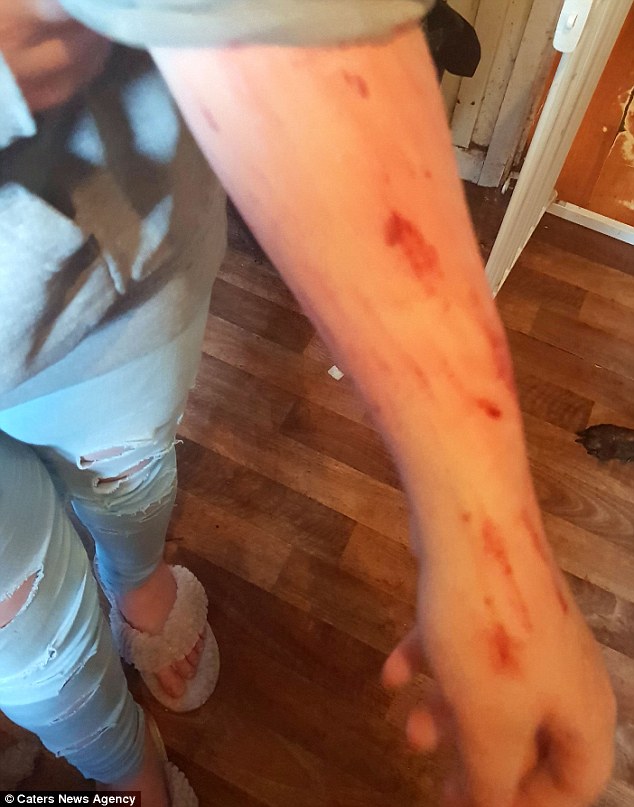 Jade’s parents have claimed that she falls into a ‘limbo’ category, where she is too old for child mental health care, yet too young to be seen by adult mental health specialists

‘Self-harm can be dangerous, and I discussed how this can be a risk-factor in more serious harm; but that for the time being Jade was practicing this in a low risk way.’

Jade’s parents said the 17-year-old also sees things that aren’t there and hears voices that have told her to kill herself.

Her parents are also convinced she has autism, as she has failed to socially develop at the same rate as her peers and has been diagnosed with a speech-language impairment. 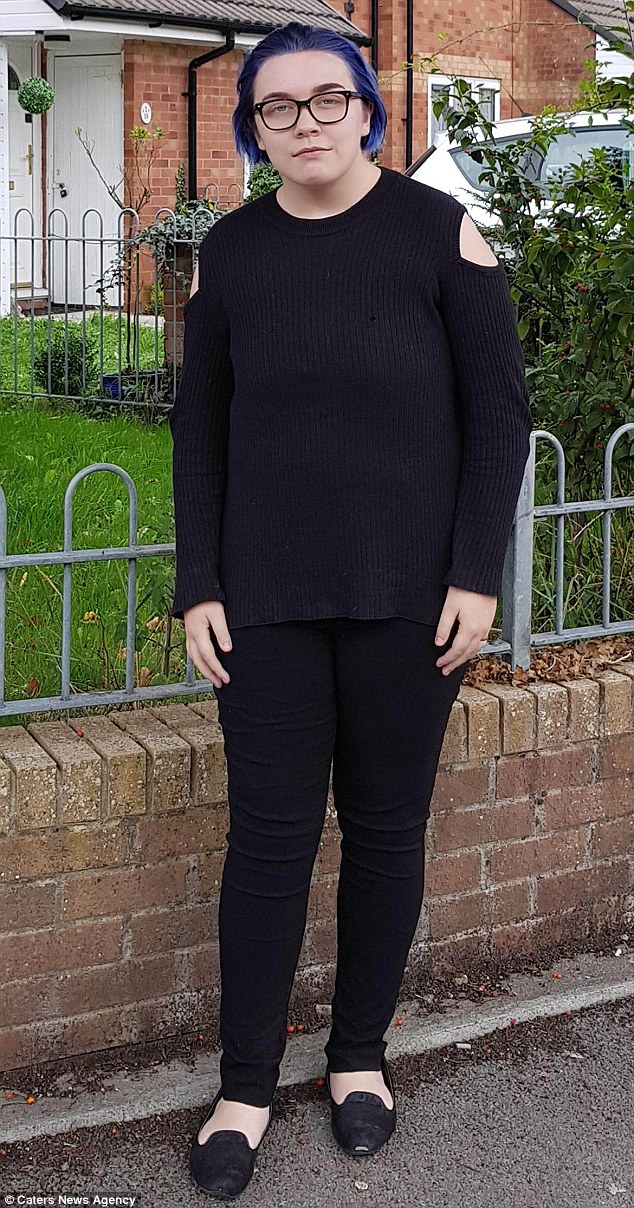 Jade (pictured) sees things and hears voices that aren’t there, who tell her to harm herself

However, despite being seen numerous times by doctors and child mental health professionals, Dawn and Ben claim she has yet to receive a positive autism diagnosis and is ‘being passed from pillar to post’.

Stepdad, Ben, 39, a DJ, said: ‘Jade has been fobbed off too many times with the excuse that there are no services available for her until she turns 18.

‘She doesn’t turn 18 until next May, and her self-harming has been going on for the last four years and is getting worse. If she were to kill herself between now and then who will be accountable? 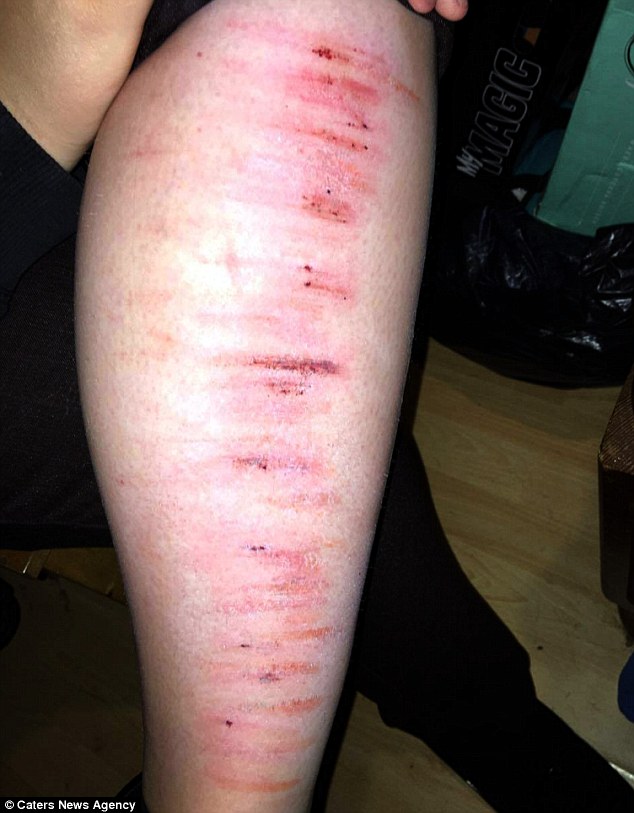 Jade suffers from depression, body dysmorphia and gender confusion, he parents are concerned she could attempt to take her own life before she turns 18

‘We feel like we can’t get any help. We took her to the GP who referred her to CAMHS (Child and Adolescent Mental Health Services).

‘So we went to CAMHS who told us we should seek counselling through her college. We went to the college, they gave her counselling, but it was discontinued.

‘Then we went back to the GP and were referred to CAMHS again. It’s just a vicious circle and we’re not getting anywhere with it.’

Dawn said she first noticed something was wrong with Jade when she was a baby.

Jade began self-harming at the age of 13, after being bullied at high school, and has tried to hang herself on several different occasions.

And her parents believe that her undiagnosed autism heightens everything she feels, which leads her to self-harm. 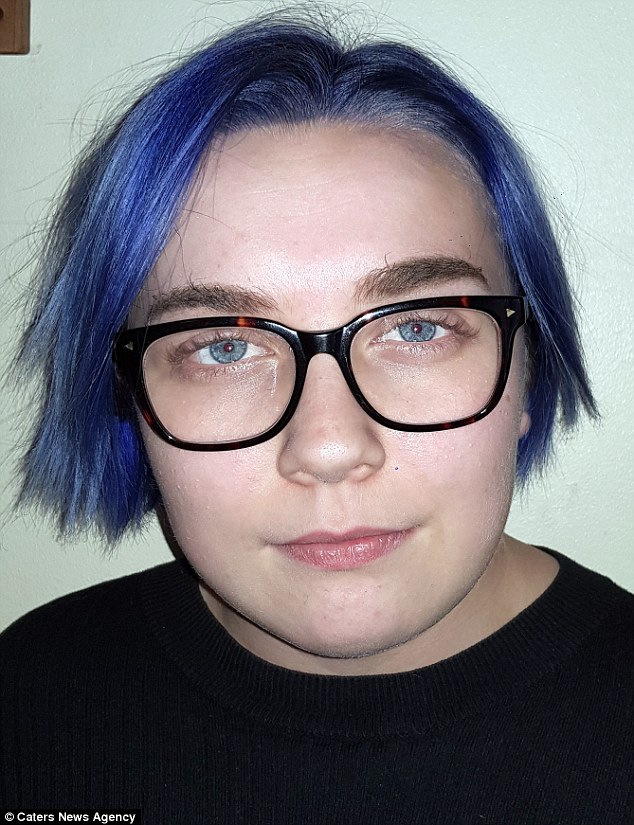 Ben and Dawn have also written to their local Labour MP, Madeleine Moon for help.

Ben said: ‘When Jade was 14, she began ‘seeing’ a person called Claire, who she says is the dark side of her personality.

‘Claire tells Jade she’s no good, and she should cut and kill herself.

‘We’ve had a crisis team out to Jade on numerous occasions and still, nothing is being done. We’re so worried and frustrated. We believe Jade needs proper psychiatric care.

‘We just want to get her some help, we’re desperate. Something needs to change with the whole mental health system.

‘All we want is to be helped. Not just for Jade’s sake, but for all those out there who are suffering the same.’

Oak Tree Surgery said: ‘We are sorry that Jade and her family were unhappy with her treatment at the practice, but we are limited in what we can say due to patient confidentiality.

‘Oak Tree Surgery strives to provide the very best care for our patients and act in their best interests at all times.’

NHS Wales said it would not be appropriate for them to comment as Jade is under the care of CAMHS South Wales, run by Cwm Taf University Health Board.

If you have been affected by any of the issues in this article then you can call Samaritans on 116 123 or visit the website here.