Athens: As Greece struggles to deal with a seemingly endless influx of migrants from neighbouring Turkey, the conservative government has a contentious new plan to respond to the problem: a floating net barrier to avert smuggling boats.

But rights groups have condemned the plan, warning that it would increase the perils faced by asylum-seekers amid growing tensions at camps on the Aegean Islands and in communities there and on the mainland. The potential effectiveness of the barrier system has also been widely questioned, and the centre-right daily newspaper Kathimerini dismissed the idea in an editorial Friday as "wishful thinking." 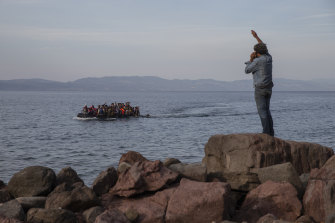 Refugees and migrants aboard an overcrowded dinghy cross the Aegean Sea, from Turkey to the coast of Lesbos island, Greece in 2015. Greek authorities have invited private contractors to bid on supplying a 2.7-kilometre floating barrier.Credit:AP

Moreover, the main opposition party, the leftist Syriza, has condemned the floating barrier plan as "a disgrace and an insult to humanity."

Authorities aim to install a 2.7 kilometre barrier between the Greek and Turkish coastlines that would rise 50 centimetres above the water and display flashing lights, according to a description posted on a government website this past week by Greece's Defence Ministry.

Citing an "urgent need to address rising refugee flows," the 126-page submission invited private contractors to bid for the project that would cost an estimated €500,000 ($830,000), including the cost of four years of maintenance. The government is expected to assign the job in the next three months. 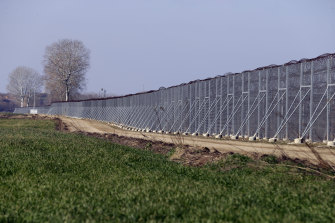 Part of a 10.5-kilometre fence along the Greek-Turkish border.Credit:AP

Greece's defence minister, Nikolaos Panagiotopoulos, told Greek radio Thursday that he hoped the floating barrier would act as a deterrent to smugglers, similar to a barbed-wire fence that Greek authorities built along the northern land border with Turkey in 2012.

The construction will be overseen by the Defence Ministry, which has supervised the creation of new reception centres on the Greek islands and mainland in recent months, and will be subject to "nonmilitary specifications" to meet international maritime standards, the submission noted.

But rights activists warn that the measure would increase the dangers faced by migrants making the short but perilous journey across the Aegean. Amnesty International's research director for Europe, Massimo Moratti, condemned the proposal as "an alarming escalation in the Greek government's ongoing efforts to make it as difficult as possible for asylum-seekers and refugees to arrive on its shores."

He warned that it could "lead to more danger for those desperately seeking safety".

The head of Amnesty International's chapter in Greece, Gavriil Sakellaridis, questioned whether the Greek authorities would respond to an emergency signal issued by a boat stopped at the barrier.

The European Commission has expressed reservations and planned to ask authorities in Greece, which is a member of the European Union, for details about the proposal. Adalbert Jahnz, a commission spokesman, told reporters in Brussels on Thursday that any Greek sea barriers to deter migrants must not block access for asylum-seekers.

"The setting up of barriers is not in and of itself against EU law," he said. "But physical barriers or obstacles of this sort should not be an impediment to seeking asylum which is protected by EU law," he said, conceding, however, that the protection of external borders was primarily the responsibility of member states.

The barrier was proposed amid an uptick in migrants from Turkey. The influx, though far below the thousands of daily arrivals at the peak of the crisis in 2015, has put an increasing strain on already intensely overcrowded reception centres.

"It sends out the message that we are not a place where anything goes and that we're taking all necessary measures to protect the borders," he said, adding that the process of deporting migrants who did not merit refugee status would be sped up.

"The rules have changed," he said.

Greece has repeatedly appealed for more support from the bloc to tackle migration flows, saying it cannot handle the burden alone and accusing Turkey of exploiting the refugee crisis for leverage with the EU.

Repeated threats by Turkey's president, Recep Tayyip Erdogan, to "open the gates" to Europe for Syrian refugees on his country's territory have fuelled fears that an agreement signed between Turkey and the EU in 2016, which radically curbed arrivals, will collapse.