Home » World News » ‘He had everything to live for’: Young tradie killed in stabbing outside Seaford train station

A Melbourne father has remembered his son as "a great young man" who had everything to live for after he died in a suspected stabbing at Seaford train station in the city's south-east.

Police found the 26-year-old Langwarrin man with life-threatening injuries after being called to reports of a stabbing on Station Street just before 7pm on Wednesday.

He was treated by paramedics but died at the scene. 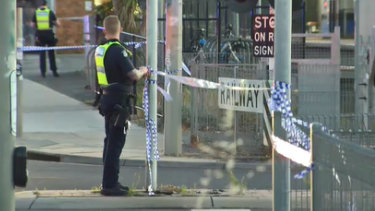 The young man's father Mike called radio station 3AW on Thursday morning to pay tribute to his son, who he said was a carpenter and gifted athlete.

The man said that his son had just had dinner with his girlfriend on Wednesday night and they were getting into their car when a group of three or four men and a woman approached them.

He said the woman abused his son's girlfriend using "all sorts of expletives".

"He went to defend her and a bottle was broken and in that fight he was stabbed in the heart and died fairly quickly," he said through tears. 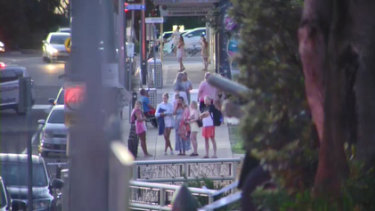 The man was attacked in front of onlookers.Credit:Nine News

"I wanted to ring and talk about my boy. He was 26 … he had everything to live for. He was a go-getter, hard worker. He had a heart of gold, he would help anyone, anytime. He was a fantastic kid.

"He was just a great young man. He was a carpenter. I had to ring his boss last night and he was devastated. He was devastated because he looked upon him as his little brother."

"I look at this year and think it couldn't get any worse, but to find that out last night it really hit home. You hear stories … of people losing their loved ones to crimes and lives taken and you feel sorry for them and your life goes on and you don't really know what the family are going through and I do." 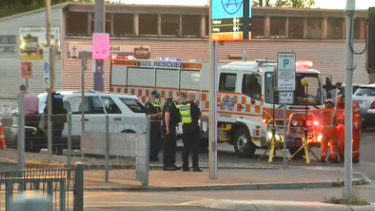 The scene of the fatal attack.Credit:Nine News

He said his son was a gifted runner. He wanted to work for himself and become a registered builder and also wanted a family in the future.

"Those things are snuffed out in a matter of minutes," he said.

Chief Police Commissioner Shane Patton also told the program that police had CCTV footage of the incident and called on those responsible to come forward.

Homicide detectives are still establishing the circumstances around the incident.

Buses replaced trains between Mordialloc and Frankson for more than five hours from 8pm due to the death, with Seaford station also closed on Wednesday night.

Anyone who witnessed the incident or with information is urged to contact Crime Stoppers on 1800 333 000 or visit www.crimestoppersvic.com.au.