Lawyers for the restaurant owner suing the Andrews government over the contentious direction argue the legal advice is evidence that Victoria's deputy public health commander, Michelle Giles, knew the curfew could be illegal. But the lawyers failed in their attempt to have Associate Professor Giles front court in person next week to answer questions. 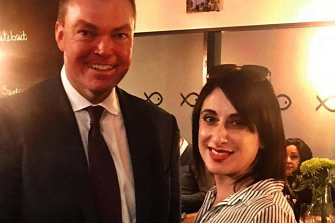 Restaurant owner Michelle Loielo, a member of the Liberal Party, is suing the state government over the curfew and estimates the ongoing stage four restrictions have caused a 99 per cent decline in revenue at her business on the Mornington Peninsula.

Ms Loielo has named as the defendant Professor Giles in her capacity as the state's deputy public health commander.

Lawyers for both sides appeared before Supreme Court judge Justice Timothy Ginnane on Friday in a final administrative hearing before the civil trial starts on Monday.

Barrister Vanessa Plain, for Ms Loielo, said documents showed Professor Giles received legal advice from within the Department of Health and Human Services that raised doubt over whether the curfew complied with Victoria’s Human Rights Charter. The legal advice was in email from the department's director of legal services, Sean Morrison.

Ms Plain told the court Mr Morrison's written advice was, "It is the department's view that these directions are, on balance, likely to be compatible with human rights under the charter … in light of the exceptional circumstances. However, we note that this assessment is not without doubt, in particular there is some risk of incompatibility with respect to the evening curfew."

Ms Plain said the legal advice brought into question "squarely and plainly" Professor Giles' credibility and her rationale for signing off on the curfew.

The barrister said it was therefore appropriate that Professor Giles be questioned in person at trial rather than give evidence remotely. The official's presence in person at trial would also ensure she was "not being coached or assisted by those sitting behind the government", Ms Plain said.

"The gravity of the issues in this case certainly warrant an in-person appearance," Ms Plain said.

But Justice Ginnane rejected the submission and ruled it was appropriate that Professor Giles give evidence remotely in keeping with court hearings and public inquires amid lockdown in Victoria. He said although remote hearings weren't as satisfactory as in-person appearances, lawyers could still challenge a witness's credibility without them being in court.

Barrister Jason Pizer, QC, for the government, opposed moves to have Professor Giles attend court in person and rejected any suggestion she would be "coached or directed" answering questions. "It's quite an extraordinary submission to make and there's absolutely no basis for it," he said.

The senior health official is likely to give evidence via a video link from her home, and Justice Ginnane said he would tell her she would need to be in a room by herself, with her phone off and no documents in front of her.

The curfew came into effect on August 2 and according to court documents, Professor Giles made the decision to continue the curfew because "the reduction of case numbers was due to the stage four restrictions being imposed".

The basis for her decision was formed from daily reports – an "outbreaks summary report" and a COVID-19 intelligence report – along with consultations with other health officials and her own specialist training in infectious diseases.

Another of Ms Loielo's lawyers, Jason Harkness, said there was also a "conflict" in the associate professor's affidavit compared to department emails in the rationale the health official used to approve the curfew.

Ms Loielo's lawyers again called for the release of more documents over the decisions behind the curfew and the stage four restrictions, including data that Professor Giles used to conclude there was a correlation in the restrictions and a decline in COVID-19 transmissions in the community.

But lawyers for the government opposed the release of more documents, citing the principles of lawyer-client privilege and public interest immunity, and because they were discussed at state cabinet level. At one point, government lawyer Emrys Nekvapil described some documents as "fairly mundane" and "not very interesting".

Justice Ginnane ruled it was reasonable for Ms Loielo's lawyers to get access to the data that Professor Giles used to conclude that restrictions were helping reduce transmissions. But he also refused to allow access to papers that were protected.

The curfew is to continue until October 26.