At least ten people have been arrested at the Shrine of Remembrance as police crack down on anti-lockdown protests across the city.

About 200 people had gathered at the Shrine by late morning on Saturday after people used social media to tout "Freedom Day" rallies in capital cities around the country – including in Melbourne where stage four lockdown restrictions are in place. 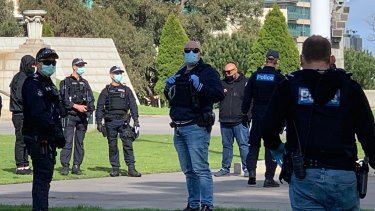 About 100 police were in and around the Shrine, including the mounted unit,

One man was arrested by police after telling officers any fines would be "unlawful". His white t-shirt sported black hand-written scrawl about Bill Gates.

Another woman toting a hand-painted sign which said ‘end the lockdown, end the suffering’ told the gathered media through tears she was "asking the world to help us".

Police told the woman to move away, as she had already received a fine for breaking the Chief Health Officer’s stay-at-home directions.

Asked about the heavy police presence in central Melbourne on Saturday Premier Daniel Andrews revealed his own car was stopped on the way to work this morning.

"There is a very visible, very significant police presence in the city," he said.

"Some people have forecast that they in a selfish, dangerous and unlawful way protest and police are taking appropriate steps. It is absolutely selfish for people to be out there protesting.

Anti-lockdown activists have drawn thousands of their followers onto encrypted messaging apps as Facebook blocks their social media pages. A channel appeared on chat app Telegram on Tuesday and by Thursday night had garnered more than 5300 members.

"I feel like we are playing right into the hands of authority, at least in Melbourne," he said in a Facebook live video seen by thousands.

Police have drawn criticism in recent days from legal and civil liberty groups for their treatment of alleged organisers accused of inciting the protests.

In one case a pregnant woman from Ballarat was arrested and handcuffed in her lounge on Wednesday while a Melbourne man had his door broken down on Friday morning when police arrested and charged him with alleged incitment.