Home » World News » Herald legend whose columns were a mix of insight, venom and grace

A third act is rare in journalism but Alan Ramsey completed one of Australia’s most accomplished careers with a 21-year stint as the Herald’s national columnist that surely made him the most readable man in the country.

Ramsey had already gained fame as a war correspondent and a chronicler of Australia’s march from Menzies to modernity when he took over the Saturday column from Peter Bowers in February 1987.

His columns, elegant mixtures of hard-headed insight, soft-headed loyalty, anger, venom, sentimentality and grace, were loathed and loved but they were compulsive. They made reading the Saturday edition an anticipated joy. He wrote fearlessly – and sometimes erroneously – but the beauty of his high wire act was waiting for him to fall or make it to the other side. 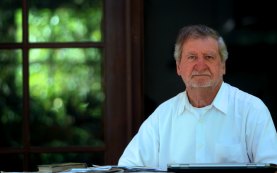 He gave enemies no quarter. His only good word for John Howard was goodbye. Some of his favourites were bad calls: Mark Latham, Bob Collins. He could be chivalrous and romantic and retained a long memory: in his last column in 2008 while genuflecting to the great and good friends attending a Canberra dinner in his honour, he also tipped his hat to the Australian Associated Press executive who defended him against Menzies government moves to kick him out of Vietnam for embarrassing reportage 43 years earlier.

But unknown to those who lionised him or denigrated him there was a cost.

Ramsey’s personal life suffered hugely due to his commitment to his craft. Perhaps a childhood troubled by family rupture, war and the Depression did not help, but he went on to two failed marriages (the second to journalist Laura Tingle) that produced four alienated children and a number of affairs. By the end, he had turned from most old friends and spent his last years alone. He died on November 24 after a long illness.

The oldest of five children, Alan Graham Ramsey was born in Hornsby in 1938, to Eric Ramsey and Thelma Ruth Simmonds. His father had run away as a young boy and little is known except the family story that he took his surname from a chemist shop sign. Eric Ramsey’s peripatetic existence was a life in hard-scrabble factory and sales jobs. The family shifted frequently, living in digs in Newtown and Bronte when Eric went to war. Thelma then took her children to live at Chittaway Point on the Central Coast. 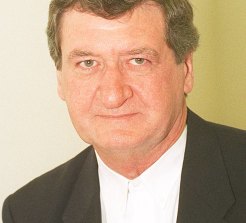 Alan Ramsey during his time as a Canberra reporter.

Ramsey completed his Intermediate Certificate at Gosford High School. He wanted to be a journalist and said this dream was inspired by a radio serial, Night Beat, an Australian take on a US show featuring newspaper columnist "Randy Stone" and his 24/7 quest for unusual stories on the rich and famous, the down and out, the crims and the cops. When Ramsey finished primary school, his mother took him to Frank Packer’s Daily Telegraph offices in Park Street, Sydney, where an executive said come back when he had completed Intermediate.

Three years later he got a job as a copy boy on the Telegraph and prosaically ran into Peter Bowers. When they met in 1953, Bowers, a newly-minted D grade journalist took a look at the 15-year-old from the Central Coast and opined: "You’ve got a shit job. Prove you can stick at it and you’ll make it."

Australian print journalism in the 1950s was not today’s closed shop and reporters jumped from pay rise to pay rise at newspapers across the country. Ramsey alighted in Mount Isa and as an 18-year-old in February 1956 wrote the first stories that established his journalistic persona as a dogged outsider and pursuer of truth the way he saw it.

Two Mount Isa police beat a prisoner in a cell and he died from internal injuries a month later. Ramsey, the only reporter on the tiny mining town paper, took on the Queensland Police and local prejudice against a Sydney blow-in, riding the story hard until the police were charged with unlawful killing. In September the charges were discharged but by then Ramsey had parlayed his scoops into a job on the Northern Territory News in Darwin.

A stint with Fairfax followed on The Sun in Sydney before Ramsey jumped to AAP and was appointed Papua New Guinea correspondent. In 1960 he landed the London job. It was an era of massive societal change and he reported it all: South Africa’s withdrawal from the Commonwealth, the Profumo Affair, the Beatles, and the election of a Labour government after three decades of Conservative rule.

Returning to an Australia still enjoying three decades of Coalition rule, Ramsey became a war correspondent. He was one of five Australian reporters and photographers who sailed on HMAS Sydney to Vietnam with 1RAR, the first battalion of Australians sent to the war in April 1965 by the Menzies government.

The dogged outsider asserted himself. Ramsey, with Herald photographer Stuart McGladrie, elected to camp with the troops at the Bien Hoa Air Base while the three other journalists stayed in Saigon hotels and caught taxis to battle.

Support for the war back home was widespread but Ramsey’s on the ground reports injected reality into Australian involvement. He showed the Menzies government had so run down defence spending that troops were kitted out with World War II issue clothing, that the first three Australian deaths and dozens of injuries resulted from the accidental self-triggering of a Digger’s hand grenade … An interview with Diggers about the shooting of a female Viet Cong suspect resulted in the Minister for the Army Jim Forbes accusing Ramsey of committing a breach of security.

AAP executive Norman Macswan flew to Vietnam to investigate and found in Ramsey’s favour and he returned to Bien Hoa. But the die was cast and he soon returned to Australia.

In 1966 Rupert Murdoch’s experiment with a national newspaper was just two-years-old and The Australian was the broadsheet darling of opinion leaders: piles of the newspaper stood a metre high at university bookshops, while the Herald in Sydney and the Age in Melbourne struggled to attract academic readers.

The late Peter Smark, who had replaced Ramsey in Port Moresby, was chief of staff of The Australian. He recruited his close friend to become the newspaper’s national correspondent.

Ramsey arrived in a Canberra where Menzies had just retired, Australia’s involvement in Vietnam was rapidly escalating, Harold Holt was a year away from drowning and Gough Whitlam was about to replace Labor leader Arthur Caldwell.

It was an epic time in political reporting and Ramsey’s contemporaries – Alan Reid, Max Walsh, George Negus, Kerry O’Brien, Alan Barnes, Brian Johns, Ian Frykberg – all had a great time but none so much as Ramsay, whose Vietnam record and crazy brave journalism afforded immediate renown, which he happily coupled to a winning charm towards enemies and friends. He had enviable rapport with Malcolm Fraser, Andrew Peacock, Whitlam, Bill Hayden (a former Queensland police officer who remembered Ramsey’s Mount Isa stories) and herds of public servants.

Ramsey was a hard charger. When he filed yet another Australian front page that sank without trace, the Herald’s Canberra chief of staff shouted across the confines of the Old Parliament House Press Gallery: "Behold, Ramsey, going down with all guns blazing. As usual."

Perhaps his most famous moment came when he reported the head of army Sir Thomas Daly telling then prime minister John Gorton that Fraser had been disloyal to the army and Peacock.

Gorton and Fraser both fell but during the parliamentary free-for-all Ramsey famously shouted "you liar" from the press gallery while Gorton was making a prime ministerial statement. This was years before Tasmanian MHR Bruce Goodluck wandered into the House in a chicken suit or Scott Morrison brandished a lump of coal in Parliament. Back then, outraged MPs wanted to jail Ramsey for turning Parliament into a circus. Cooler heads prevailed. (Ramsey later revealed it was Peacock’s wife Susan who had told him of Fraser’s bad-mouthing).

In 1973, with Murdoch starting to shift away from Whitlam, Ramsey was offered a job on the Sunday Telegraph but resigned and spent the next four years freelancing until he became opposition leader Bill Hayden’s speechwriter after Whitlam’s 1977 federal election defeat. He also acted as Hayden’s extremely irritable press secretary during Labor’s 1980 election defeat.

Professionally, Ramsey lay fallow for some seven years until Bowers stepped down as the Herald’s national columnist and the curtain went up on Ramsey’s third act.