A band of herpes-ridden monkeys are roaming across northeastern Florida after escaping from a state park miles away, threatening the locals and the environment.

The rhesus macaques were living at the Silver Springs State Park near Ocala, Florida, but the creatures, native to south and southeast Asia, escaped the area and have since been spotted in Jacksonville, St. Johns, St. Augustine, Palatka, Welaka, and Elkton, Florida, according to First Coast News.

While the monkeys tend to keep to themselves, over a quarter of the 300 feral creatures counted at Silver Spring State Park carried Herpes B, according to a 2018 survey by National Geographic.

While it’s extremely rare for herpes B to spread from monkey to human, when it does it can be fatal.

The rhesus macaques were first introduced to Silver Springs State Park in the late 1930s when a tour boat operator named Colonel Tooey released 12 of the furry animals onto a man-made island as a tourist attraction. 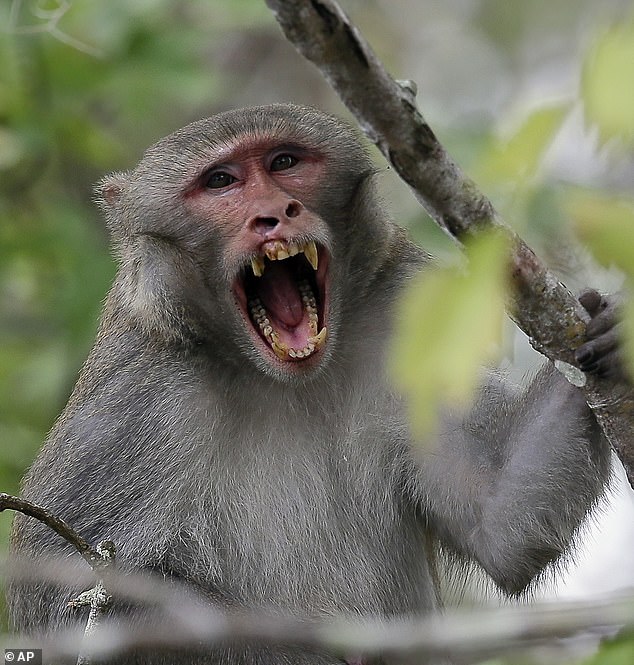 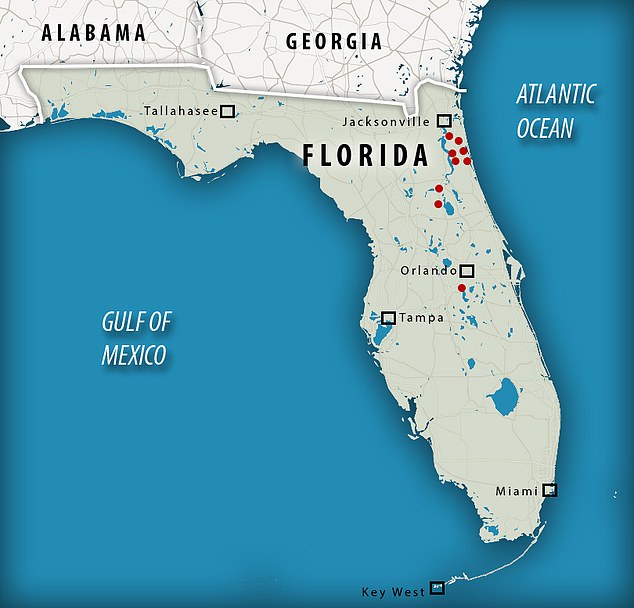 So far a dozen of monkey sightings have been confirmed over the past eight months in Jacksonville, St. Johns, St. Augustine, Palatka, Welaka, and Elkton, Florida

The creatures ended up swimming away from that man-made island and proliferated at an alarming rate. By the 1980s there were nearly 400 macaques reported.

However, to this day most are confined to the park and forests along the Ocklawaha River, but some are now showing up in residential areas.

So far a dozen of monkey sightings have been confirmed over the past eight months, with locals sharing grainy videos and photos of the animals sitting on front lawns and dangling from tree branches.

‘That is definitely a concern because I walk the dogs at like 5:30 in the morning and its pitch blackout,’ Julington Creek resident Carrie Bennet said. ‘If they bit me, if they came after and bit you, you don’t know what they have, what they’re carrying.’

The monkeys also present a major threat to the local ecosystem, and experts say the creatures could be potentially dangerous.

‘The potential ramifications are really dire,’ University of Florida primate scientist Dr. Steve Johnson said. ‘A big male like the one in that video in Jacksonville — that’s an extremely strong, potentially dangerous animal.’

‘I was shocked, totally shocked — it was a bigger monkey than I thought it would be,’ Julington Creek woman Paula Farmer said upon seeing video footage of a dog-sized monkey eating oranges that fell from a tree. ‘I love the wildlife. I would like to see one [in person].’

Eight-year-old Jason Parks reported seeing one of the monkeys out and about and described it as being about chest high with ‘sharp claws and stuff’.

‘My sister named him “George,”‘ he said.

The Florida Fish and Wildlife Conservation Commission (FWC) officials say the monkey reports are credible and it’s the result of a likely expansion of the feral monkey population in Central Florida.

In 1984 the then-Florida Game and Freshwater fish Commission allowed licensed trappers to cull the monkey population by trapping and hunting them. As a result over a thousand monkeys ended up in zoos or research facilities or were killed.

However, it was a unpopular program with the public and since 2012 there has been no active management of the monkey population. 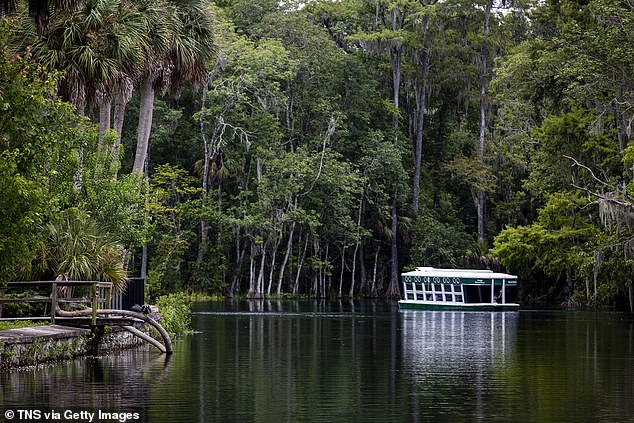 While the monkeys tend to keep to themselves, over a quarter of the 300 feral creatures counted at Silver Spring State Park carried Herpes B, according to a 2018 survey by National Geographic. Most of the population remains at the park or in the forest along the Ocklawaha River

Two years ago due to a surge in the macaque population and the presence of Herpes B, state wildlife managers released a statement in support of population control.

‘Without management action, the presence and continued expansion of non-native rhesus macaques in Florida can result in serious human health and safety risks, including human injury and transmission of disease,’ FWC Assistant Executive Director Thomas Eason said in a statement.

However, as the macaque population grows, there is still not any strategy to slow their growth as wildlife regulators continue to battle with other invasive species like Burmese pythons and feral pigs.