David Hockney, 81, is set to become most valuable living artist if his swimming pool painting sells for £62million

David Hockney is set to become the most valuable living artist if one of his masterpieces sells for £62million.

It features a man in trunks swimming breast stroke towards the end of the pool with Mr Hockey’s former boyfriend, artist Peter Schlesinger, fully-clothed, looking down at him. 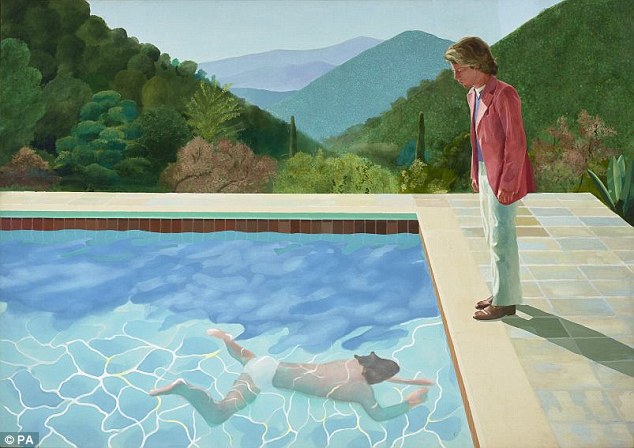 David Hockney, 81, could become the most valuable living artist if his 1971 ‘Portrait of an Artist (Pool with Two Figures)’ (above) painting sells for £62million 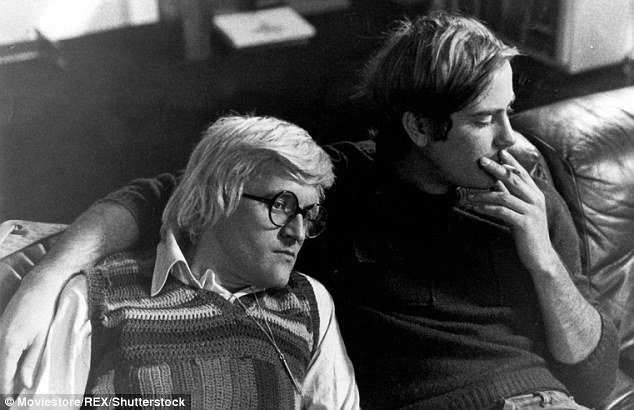 The artist, from Bradford in West Yorkshire, painted the piece in London from photographs taken at Le Nid du Duc in the South of France.

Mr Lewis, who made his fortune in currency trading, is looking to offload the painting for $80 million (£62m), according to a report by Bloomberg.

He has reportedly been in touch with numerous auction houses about the possibility of selling it later this year.

If it sells for $80 million (£62m), it will make Hockney the most expensive living artist, smashing the $58.4 million (£45m) paid for Jeff Koons’ Orange Balloon Dog sculpture at Christie’s in 2013.

Mr Hockney is one of Britain’s most famous artists and demand for his work continues to grow.

The current record for his work is £21 million – paid earlier this year for an enormous 1990 oil canvas, Pacific Coast Highway and Santa Monica.

In 2016, a study for Portrait of an Artist was sold for £1.6 million – three times its lower estimate.

Last year, the London Tate held a David Hockney exhibition which included ‘Portrait of an Artist (Pool with Two Figures)’.

It was the world’s most extensive retrospective of Mr Hockney’s work and was the Tate’s most visited exhibition ever, with more than 478,000 viewing it.

Joe Lewis, who lives in the Bahamas and owns a £110 million super-yacht, has a vast art collection made up of works by the likes of Picasso, Matisse, Modigliani and Francis Bacon.

It is rumoured his collection is worth more than £1 billion.

A spokesperson for Mr Lewis has been approached for comment.