‘I assure you that you would not have been shot’: Owner of Welsh holiday park branded a ‘concentration camp’ in scathing TripAdvisor review responds in GERMAN – and in the character of a Nazi guard

A holiday park owner’s decision to respond to a negative review in the style of a Nazi guard has been labelled ‘stupid and offensive’ by a member of the Jewish community.

John Brookshaw, who owns Plassey Holiday Village in north Wales, has come under fire after responding to a review in German and under the guise of ‘SS Camp Commandant of the Plassey’.

Mr Brookshaw was responding to a review which described his holiday village in Wrexham as a ‘concentration camp’. 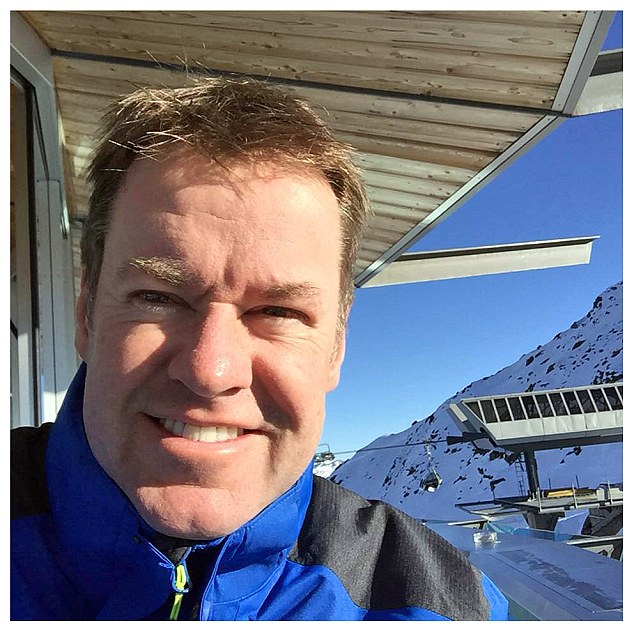 John Brookshaw, who owns Plassey Holiday Village in north Wales, has come under fire after responding to a negative TripAdvisor review in the style of a Nazi guard

The negative TripAdvisor review that prompted Mr Brookshaw to respond in the style of a Nazi guard. The review described ‘rude staff’ and a feeling of ‘being watched’ at the park

The review, written on TripAdvisor by a user from Lichfield with the name but2n2018, was entitled ‘I thought concentration camps were a thing of the past but apparently not.’

It complained about the ‘rudeness’ of staff and a ‘lack of privacy’ at the park, also describing a feeling of ‘being watched’.

The review also labelled the park’s owner ‘the rudest man [they] have ever encountered.’

Before going on to say: ‘My kids were constantly watched and the warden shouted at my daughter and made her cry and when I complained I was introduced to the owner who was equally as rude and I am guessing he trains his staff.’

The scathing review, which gave the business its fourth one rating, soon caught the eye of Mr Brookshaw.

He responded in German and in the style of an SS commandant, as reported by the Daily Post. 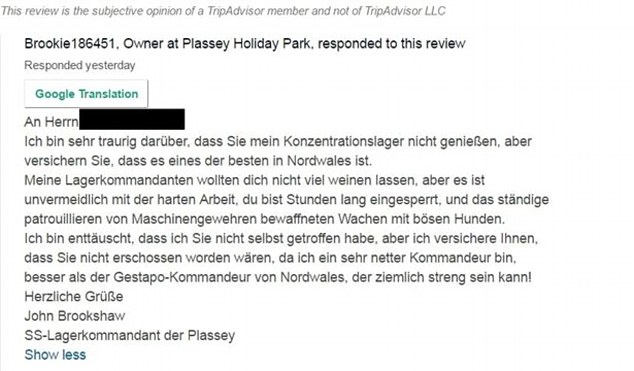 Mr Brookshaw responded to the negative review in German and in the style of a Nazi guard, signing off his message with ‘SS Camp Commandant of the Plassey’

Translated into English via Google, his response reads: ‘I am very sad that you do not enjoy my concentration camp, but assure it is one of the best in North Wales.

‘My camp commandants did not want to make you cry much, but it’s inevitable with the hard work, you’re locked up for hours, and the constant patrol of machine guns armed guards with bad dogs.

‘I am disappointed that I did not meet you myself, but I assure you that you would not have been shot, as I am a very nice commander, better than the Gestapo commander of North Wales, who can be quite strict.

The response, which has now been deleted along with the corresponding review, drew fierce criticism from some of the Jewish community.

He told the Daily Post: ‘It is offensive and demeaning from a Jewish perspective and is insulting to the victims and the seriousness of the events that took place.

‘It is a silly comment by the poster and it is a silly reply which is trying to be funny – although the original post is by far no means as bad for him to reply like this is just stupid and offensive.’ Plassey Holiday Village in north Wales, which despite the upset still has a five out of five rating on TripAdvisor. Almost 600 of these are ‘excellent’ while another 68 are ‘very good’

Addressing the upset caused, Mr Brookshaw told the Daily Post that he ‘did not mean to cause any offence’.

He said: ‘The review left was clearly untrue and they are trying to slander my business. It is a jokey response to what is a ridiculous article – it may have been flippant but it is what it warrants.

‘I have not meant to offend anyone and it should be taken as it was written – in a light-hearted manner.’

Mr Brookshaw also noted that he considered the negative review a ‘false’ one and that he found it ‘frustrating’ TripAdvisor allowed them.

Despite the recent furore the park has favourable reviews, with its current rating standing at five out of five on TripAdvisor from 697 responses.