A Highland bull was ‘scared to life’ by a kind-hearted gran who startled him into dropping the plastic carrier bag he was chomping on – despite being surrounded by plentiful lush green grass.

Elaine Armstrong was on holiday on the Isle of Mull- which lies off the west coast of Scotland- with pal Elspeth Guthrie, 50, when she jumped out of her VW camper van to snap the majestic beast in a nearby field.

However when she got closer horrified Elaine spotted the iconic Scottish mammal chewing on a plastic shopping bag.

Terrified that he would choke or need emergency care if he swallowed it, the quick-thinking carer banged hard on the side of the van to startle him into dropping it. 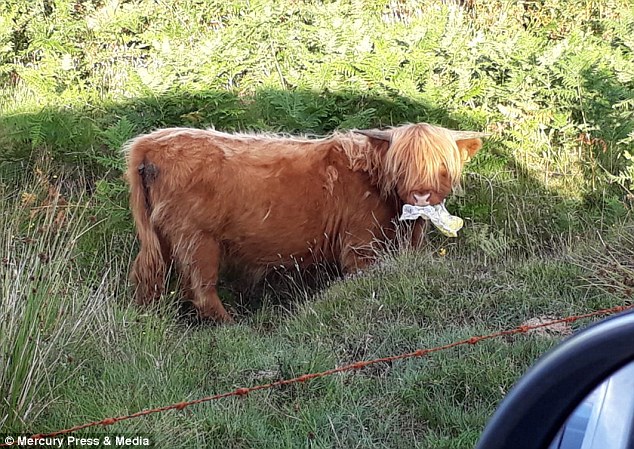 The Highland bull eating the plastic carrier bag on the Isle of Mull. The long haired majestic creature was behind some red barbed wire so Elaine Armstrong and her friend Elspeth Guthrie banged on the side of their VW to startle it 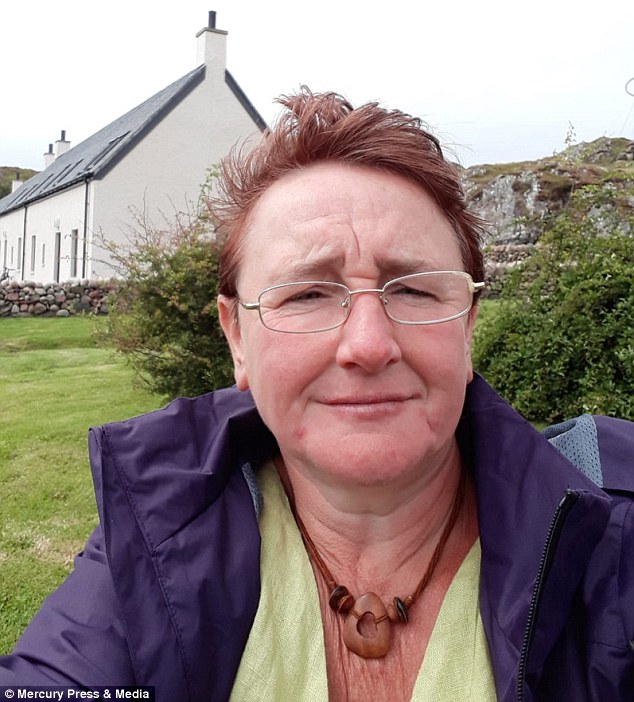 Elaine Armstrong, taking a selfie on the picturesque Isle of Man. She took pictures of the bull to highlight the environmental damage caused by dropping rubbish A close-up of the bull showing the plastic carrier bag in its mouth, within the yellow circle

Elaine from Bathgate, West Lothian, who spotted the bull last Thursday (July 26)  said: ‘I was driving on holiday with my friend and I spotted this beautiful cow at the side of the road.

‘We pulled over as I wanted to grab some photos, but as soon as I got out and saw it I shouted ‘oh my God that cow is eating a plastic bag’.

‘We were so concerned about him. The field was surrounded by barbed wire fencing so we weren’t in a position to climb over.

‘We had no idea how to get the bag off the poor cow so decided we’d have to shout and try and shock him into dropping it.

‘I shouted out ‘please don’t eat that’ while banging the side of the van.

‘A few loud bangs startled him enough to spit it out and then walk away – I scared him to life.’

The Daily Mail’s launched the Banish the Bags campaign more than a decade ago to try and cut our addiction to plastic bags.

The most recent figures show since the 5p levy was introduced there has been a 86 per cent fall in usage.

The Mail has also campaigned successfully for a ban on plastic microbeads blamed for damaging our oceans, and is now pushing for wider action against all throwaway plastic to safeguard our natural environment and wildlife.

The gran-of-two, 53, took the disturbing pictures of the bull chewing the bag to highlight just how damaging dumping rubbish, especially plastic, can be to the environment and wildlife. 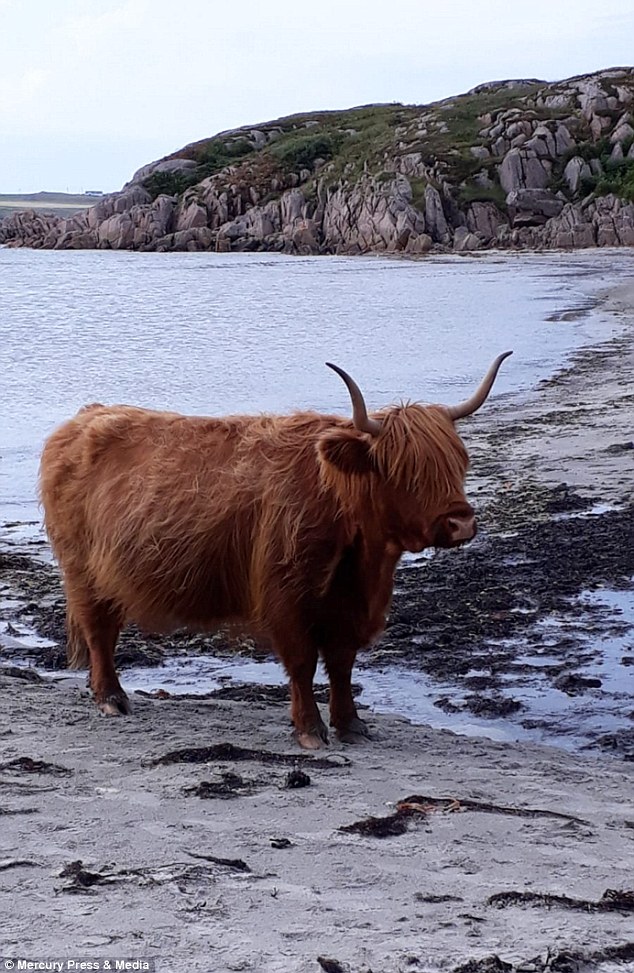 Elaine said: ‘It was ridiculous. There were juice cans and screw-top cartons in the field.

‘It’s a very remote wee single-track road towards the port which gets you to the Isle of Iona. Obviously someone had a bag of rubbish, pulled over and hurled it over the fence.

‘If he’d swallowed it he would have died. At the very least it can cause horrendous problems in their stomachs. The thought of the poor thing being in agony was horrible.

‘We live in a beautiful country and that part of the country relies heavily on tourism and agriculture.

‘By dumping rubbish like this they are ruining the scenery and endangering wildlife.

‘Highland cattle are iconic animals in the area. People come to the area to see the scenery and the cows – not piles of dumped rubbish.

‘It makes me so angry. Whoever’s done this has had no thought at all about the consequences of their actions – these beautiful, huge cows dying in agony from swallowing a plastic bag.

‘If there’s no bin about take rubbish home with you.’