Wipeout! Frightening moment massive wave soaks adventurous beach visitor after he clambers out onto the rocks

A daring man clambered on to rocks at an Iceland beach before he was engulfed in the humongous waves seconds later.

The filmer can be heard screaming his friend’s name Matt as he makes his way across Reynisfjara Black Column Beach’s basalt columns.

His dare-devil friend had just said ‘waves wouldn’t come to that area’ unless he ‘tempted the gods to hit him’, according to the camera-man. 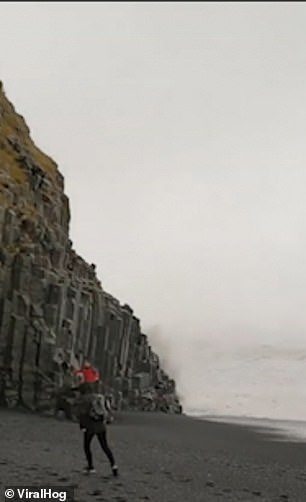 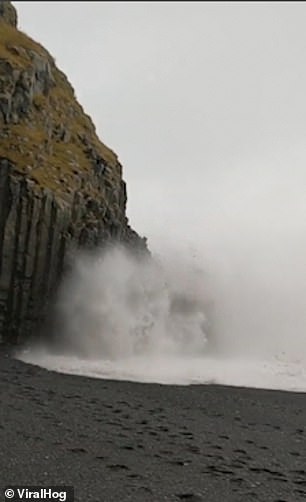 A man (pictured in a red raincoat) was swallowed up in huge waves at the Reynisfjara Black Column Beach in Iceland, just after he told his friend that waves ‘wouldn’t come to that area’, on October 7

In the scary clip however, towering waves come storming around the corner and sweep him up, on October 7.

People on the beach run for their lives to escape the water climbing up the sand.

The group find safety in a corner of the beach while others can be heard screaming in the background. 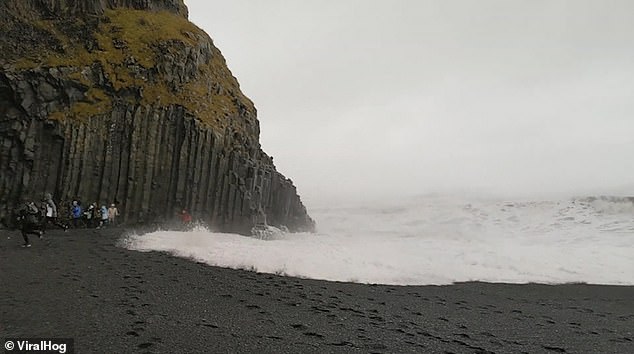 People run for their life and the man then reappears, chasing their path away from the sea. The man who took the footage revealed how his friend had just said waves would not be possible ‘unless [he] tempted the gods to hit him’

As the wave falls back down, the man reappears in his red raincoat and following the path of the other people.

Instead of running after his friend, the guy behind the camera can be heard laughing after the terrible timing of his friend Matt’s rock-climbing.

Reynisfjara Black Column Beach is famous for its black sand and lies next to the village of Vík í Mýrdal. This distinct coloured sand was formed by heavily eroded volcanic rock which cooled and hardened after making contact with sea water.

The beach was named as one of the Top 10 non-tropical beaches to visit by National Geographic, in 1991.

Why is the sand black at the Reynisfjara beach in Iceland?

The sand has formed from heavily eroded volcanic rock at Reynisfjara Black Column Beach in Iceland, giving it the distinct black colour.

The rocks, which are scientifically known as extrusive igneous, have formed from lava which darkens after it has cools and hardens. It cooled instantly after meeting sea water. 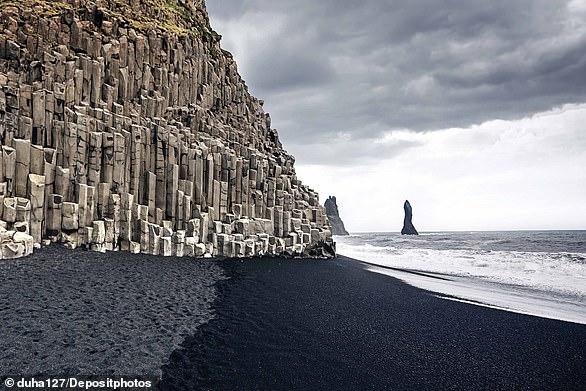 And overall, Iceland has around 130 volcanoes and black beaches form from their ashes.

Black sands were created at Reynisfjara after an alleged eruption at volcano Katla which was erupted several times during the last thousand years.

Katla has been dormant for nearly one hundred years – with the last eruption breaking through the ice cap occurring in 1918 and the ash reaching 14km in height.

Flood events in 1955 and 1999 could have causes small eruptions.