More than 100 hospitality businesses in the UK – including pubs, restaurants and hotels – have written to the Prime Minister demanding that Covid restrictions are reviewed every three weeks.

The letter accuses the Government of making ‘this fight to survive even harder’ and warned that thousands of jobs will be lost if businesses do not survive ‘this bleakest of winters’.

In the letter, industry leaders say that even before the latest Covid-19 restrictions, half of all hospitality businesses did not believe they would survive beyond the middle of next year. 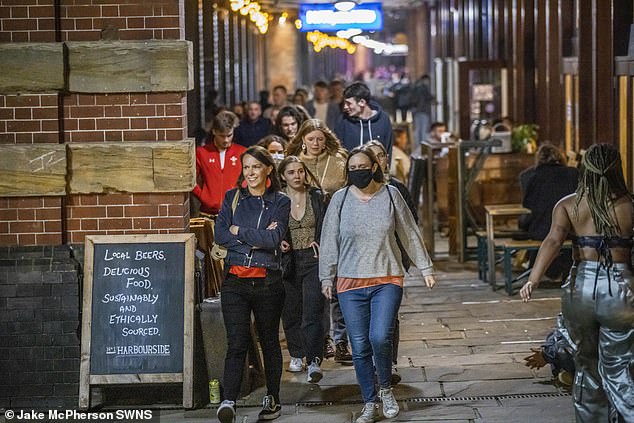 More than 100 companies, including pub and restaurants bosses, have written to the Prime Minister over concerns about the 10pm curfew as critics say the restriction is ‘doing more harm than good’ due to large numbers of revellers spilling on to streets and transport at 10pm 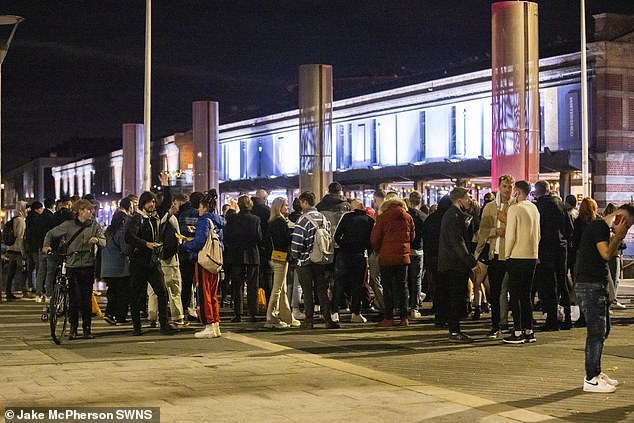 Letter states the latest restrictions, including 10pm curfew, will ‘make it even harder to survive’ and are urging the Government to review whether they’re appropriate every three weeks

It comes as companies prepare for what to do when the Government’s furlough scheme ends on October 31.

The letter, led by trade associations the British Beer & Pub Association, UKHospitality and the British Institute of Innkeeping, states the latest restrictions, including the 10pm curfew, ‘have made this fight to survive even harder’.

Businesses are urging the Government to commit to reviewing the appropriateness of the latest restrictions at least every three weeks, and to remove them if they prove ineffective in halting the spread of the virus.

It states that the Government needs to provide more support and that the Chancellor’s winter support package ‘does not go nearly far enough for our imperilled sector’.

The letter calls on the Prime Minister to remove employer contributions for the hospitality sector to the Job Support Scheme and provide a package of grant funding for those businesses that face restrictions.

To plan and rebuild beyond the winter, industry leaders say the VAT cut and business rates holiday must also be extended through 2021 and beer duty cut.

The letter asks the Prime Minister ‘to intervene as a matter of urgency’ and offers a meeting of sector leaders to help draw up a support package for the sector.

The demand comes as questions continue to be asked as to why Government Ministers have chosen to target pubs and restaurants with economically-crippling measures to curb the spread of coronavirus.

Critics have said the measures do not make sense given that the official data suggests they are barely to blame and that most cases can be traced back to schools and offices. 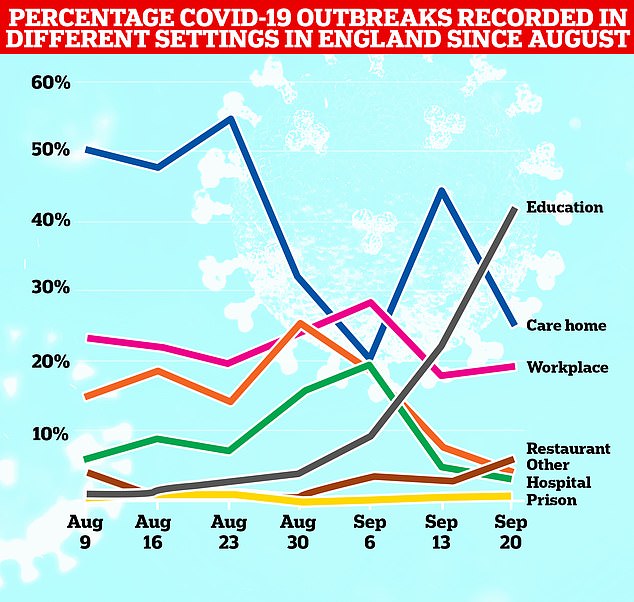 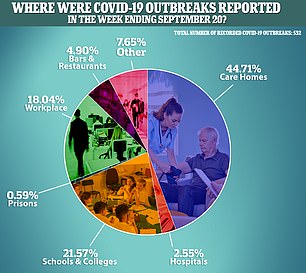 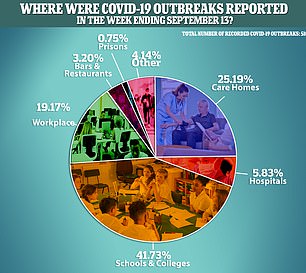 The PM is facing a rising tide of anger over his handling of the crisis after Manchester Mayor Andy Burnham said the government’s drinking deadline was merely shifting the partying into homes and doing ‘more harm than good’.

Scores of drinkers were spotted in trendy Moseley, Birmingham, on Saturday night twirling around to a brass bands, despite restrictions urging social distancing. Similar extraordinary scenes were witnessed in London and Manchester as the restrictions appeared to backfire spectacularly.

MPs have also reacted with outrage to signs that ministers could go even further in toughening up the measures soon, by banning mixing between households indoors – something Nicola Sturgeon has already done in Scotland.

Former Labour leadership contender Mr Burnham said: ‘I received reports that the supermarkets were absolutely packed to the rafters, lots of people gathering after 10pm.

‘I think there needs to be an urgent review of the emerging evidence from police forces across the country. My gut feeling is that this curfew is doing more harm than good.

‘It’s potentially contradictory because it creates an incentive for people to gather in the streets or more probably to gather in the home. That is the opposite of what our local restrictions are trying to do.

‘I don’t think this has been properly thought through to be honest and it also of course damages the bars and restaurants.’ 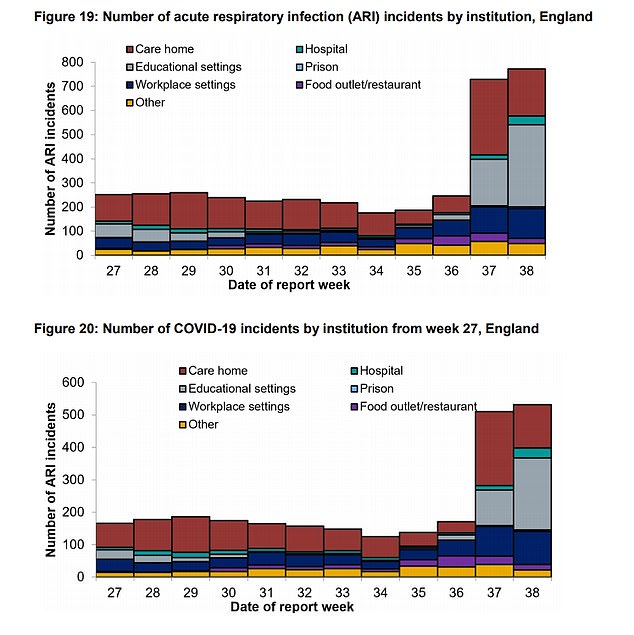 Just 22 of 532 outbreaks of acute respiratory infections were reported in food outlets in England between September 14 and 20. Seventeen of these were confirmed to be down to Covid-19, while the others could have been flu or other viral illnesses 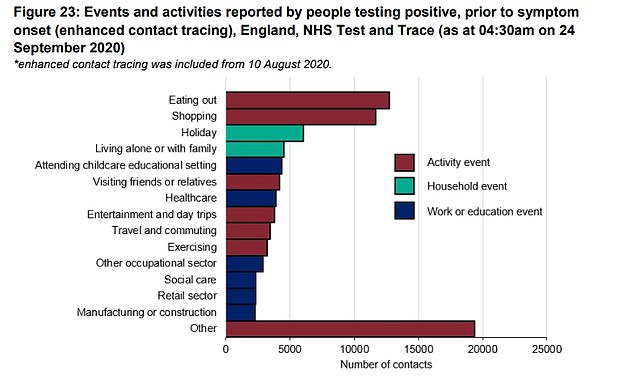 Separate data published by Public Health England revealed that eating out, shopping and going on holiday were the most common activities reported by people who had tested positive for Covid-19, before they developed any symptoms

His words were echoed by Liverpool mayor Joe Anderson. The city has seen its average number of daily cases almost treble in two weeks, pushing it on to the Government’s lockdown watchlist.

Slamming the Government’s blanket approach, he said: ‘You can’t have off-licences and supermarkets open until midnight selling beer, and pubs emptying at 10pm, when people go to the off-licences, buy beer, drink either out in the street in large groups or go to houses, and drink in large groups. It will just spread the virus.

‘The situation currently is making things more dangerous and not better.

‘I think it’s stupid to close restaurants at 10pm,’ he said, adding that midnight would be ‘more responsible’ and that pub closures should be staggered.

One enraged Conservative MP also voiced his concern over the measures, telling Politico: ‘Which clown-faced moron thought it would be a good idea to kick thousands of p***** people out from the pubs into the street and onto the tube at the same time?

‘It’s like some sort of sick experiment to see if you can incubate a second wave.’

Meanwhile, Speaker Lindsay Hoyle is set to save Boris Johnson’s blushes by refusing to call a rebel Tory amendment on coronavirus curbs this week – despite more MPs joining the revolt.

The PM is struggling to quell growing fury from his own MPs over the restrictions and the lack of parliamentary scrutiny.

There are claims that up to 100 are ready to line up behind an amendment tabled by Conservative backbench chief Sir Graham Brady, which would force ministers to get approval in advance before bringing in more restrictions.

However, in spite of the groundswell of support, Speaker Lindsay Hoyle is not expected to allow a vote on the change. 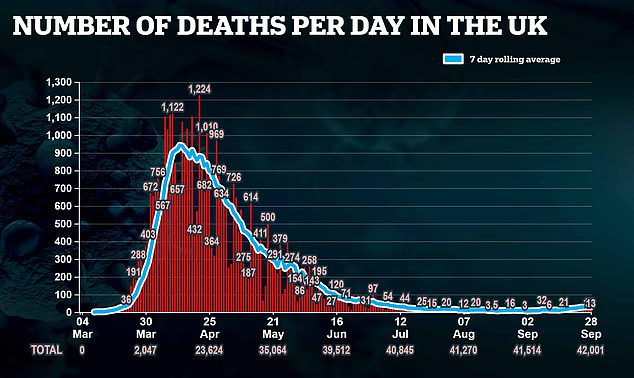 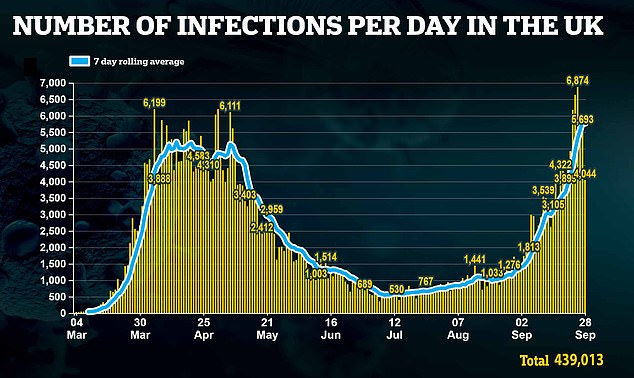 Pictures showed thousands of revellers crowding onto England’s streets and public transport this weekend after the curfew kicked in at 10pm.

Data from NHS Test and Trace reveals that between September 21 to 27 the most common place of transmission was reported as in the household, or being a visitor to another household.

The data also showed that coronavirus sufferers were most likely to report eating out or shopping prior to developing symptoms, followed by a holiday or living alone or with family.

Scientists are divided over the 10pm deadline which ‘doesn’t seem to be based on evidence’, instead suggesting that it was arrived at using a trade-off between economic damage and a desire to curb the viral spread.