As shoppers pass by, one wild-eyed addict appears to be attempting to buy drugs with the proceeds of a shoplifting spree — the price tag is still on one jacket he is offering. 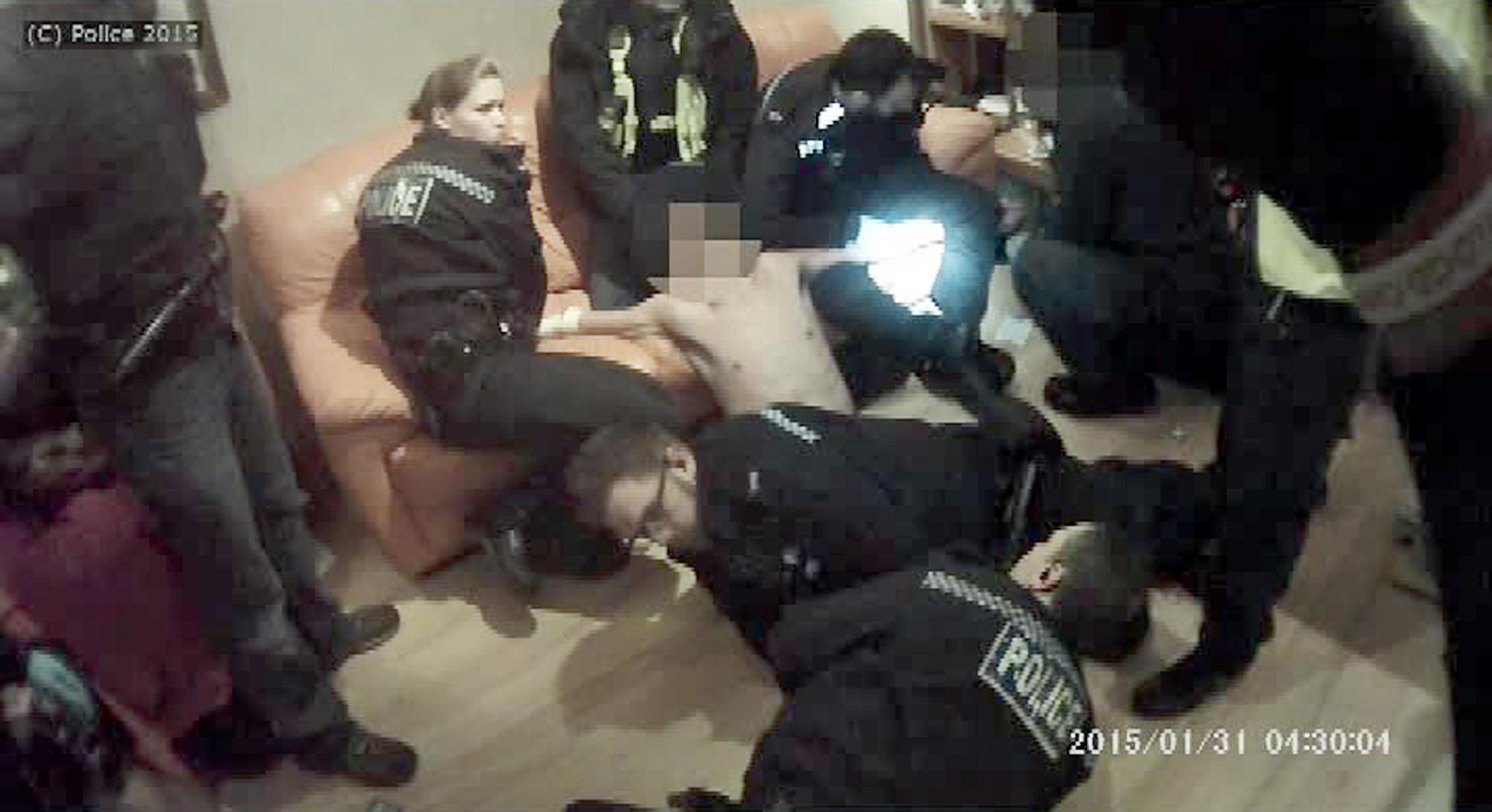 Soon the £2 deals of the synthetic Class B drug will combine with whatever else is in their systems for a potentially psychotic, days-long high which can “turn users into the Incredible Hulk”.

Haunted by imaginary demons, Dust users here in the Potteries have been found running blindly through traffic, teetering on house roofs, and perched on lamp posts.

One paramedic wrote on Facebook recently: “Drove through Stoke two nights ago, it’s like a scene from Night Of The Living Dead. Monkey Dust’s not a problem, it’s already an epidemic.”

Monkey Dust — aka Zombie or Cannibal Dust, owing to its violent side effects — is an off-white powder that can be swallowed, injected or snorted. 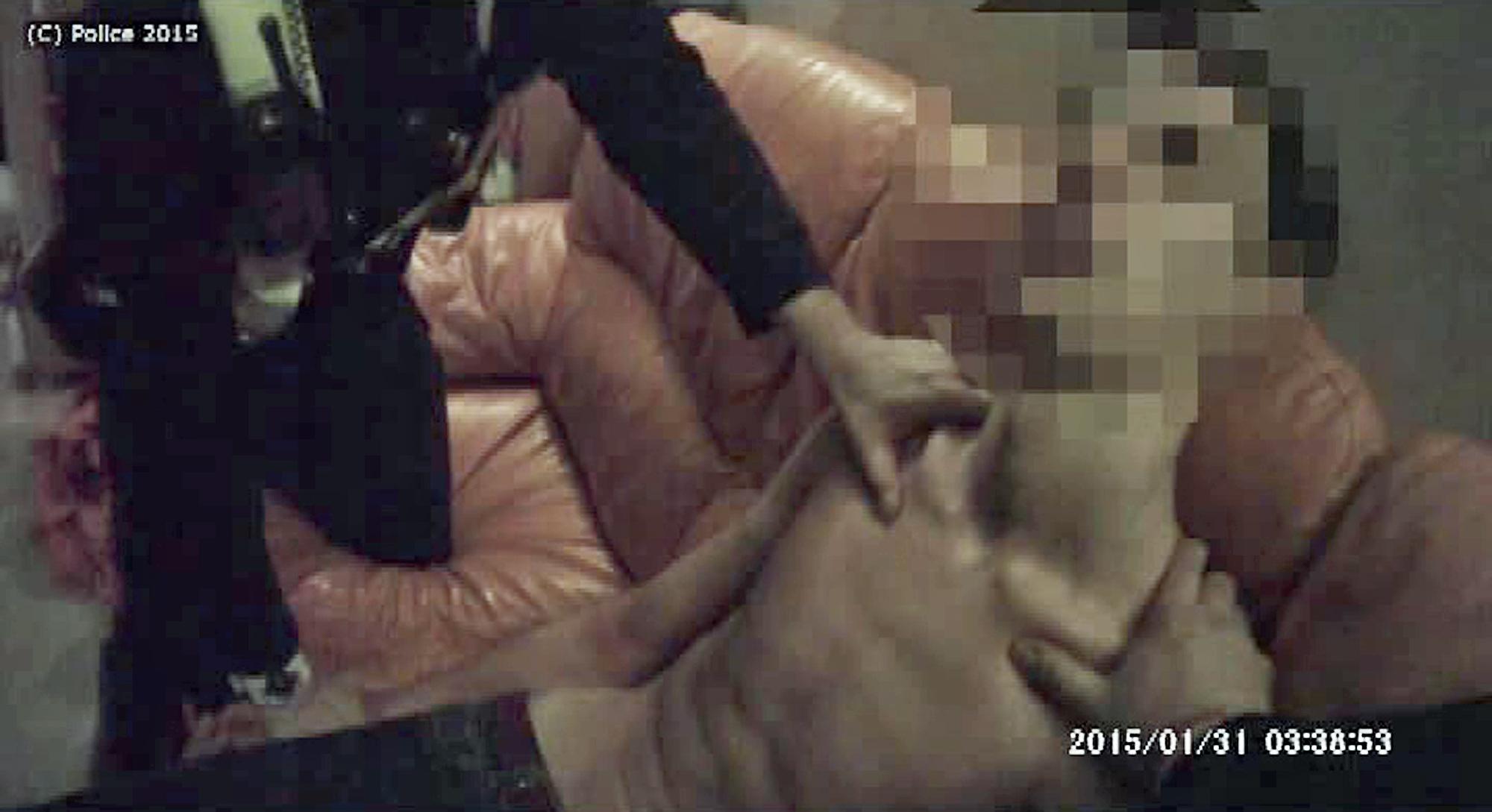 Its chemical name is Methylenedioxypyrovalerone, or MDPV, and it has been linked to face-eating attacks in the US.

In the UK it is not just in Stoke where there is a problem. Last month police linked the deaths of two men and the illness of a third in Telford, Shrops, to a bad batch of the drug.

In January, West Mercia cops warned it was “doing the rounds” in Worcs. 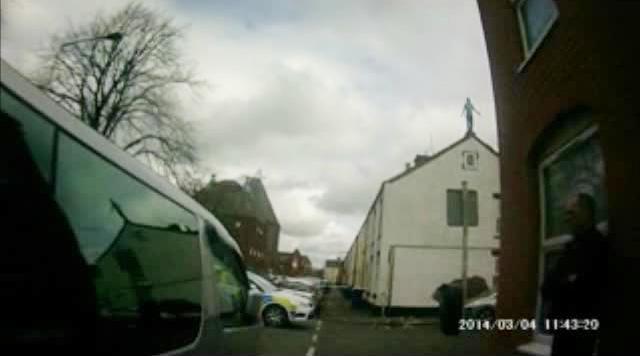 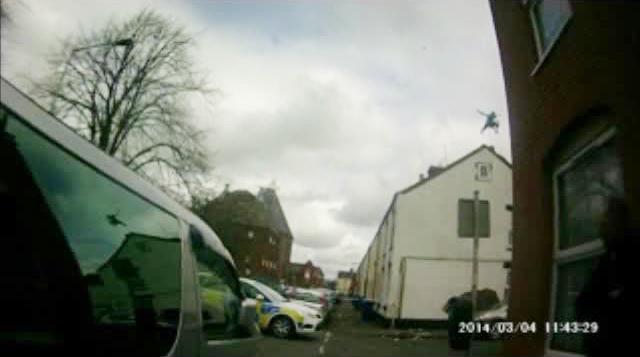 It was sold as a legal high but reclassified as a Class B drug in 2010.

Shuffling along the pavement, Dust user Lee, 40, tells me: “It’s like crack cocaine, it keeps you up for days. It makes you paranoid. You see things.

“I’ve been addicted to heroin for 27 years and taking Monkey Dust since September. The Dust has done more damage than all those years of heroin.”

When I speak to another user, his words are indecipherable. He eventually explains that his high-speed gabble is an effect of the Dust. 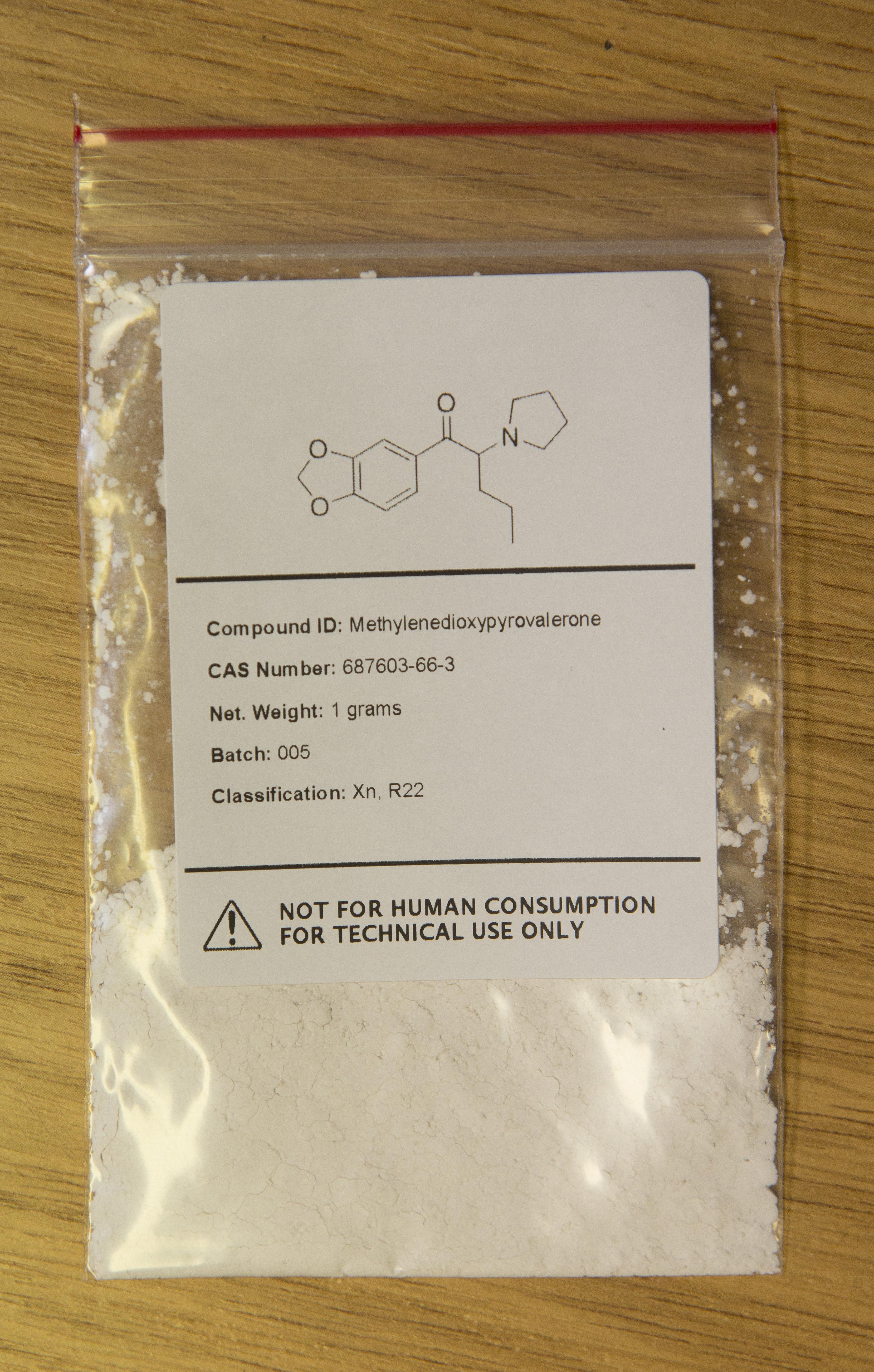 In nearby Hanley I encounter a bedraggled woman swaying along a footpath and throwing her hands wildly in the air.

Asked how it feels taking the drug, she uses her arm to mimic a rocket soaring towards the heavens before crashing down to Earth with a bPictureang.

Pointing once more towards the clouds, she says: “I can see hell’s angels in the sky.”

Stoke’s hard-pressed front-line paramedics and police are facing the brunt of the Monkey Dust scourge. West Midlands Ambulance Service Operations Manager Steve Rust, 49, is terrified for the welfare of his crews. He says: “Users have no fear, there’s no pain threshold. There’s total paranoia, voices in their heads, things behind their eyeballs and irrational behaviour even with their own family.

“One user was so paranoid he said gunmen and devil dogs were chasing him. Another went from a zombie state to smashing up an ambulance.”

A paramedic for 23 years, Steve is horrified by how the drug has taken hold.

He adds: “It’s not just people of no fixed abode. We go to working-class families and middle-class families where someone has just taken it and are off their trolley. 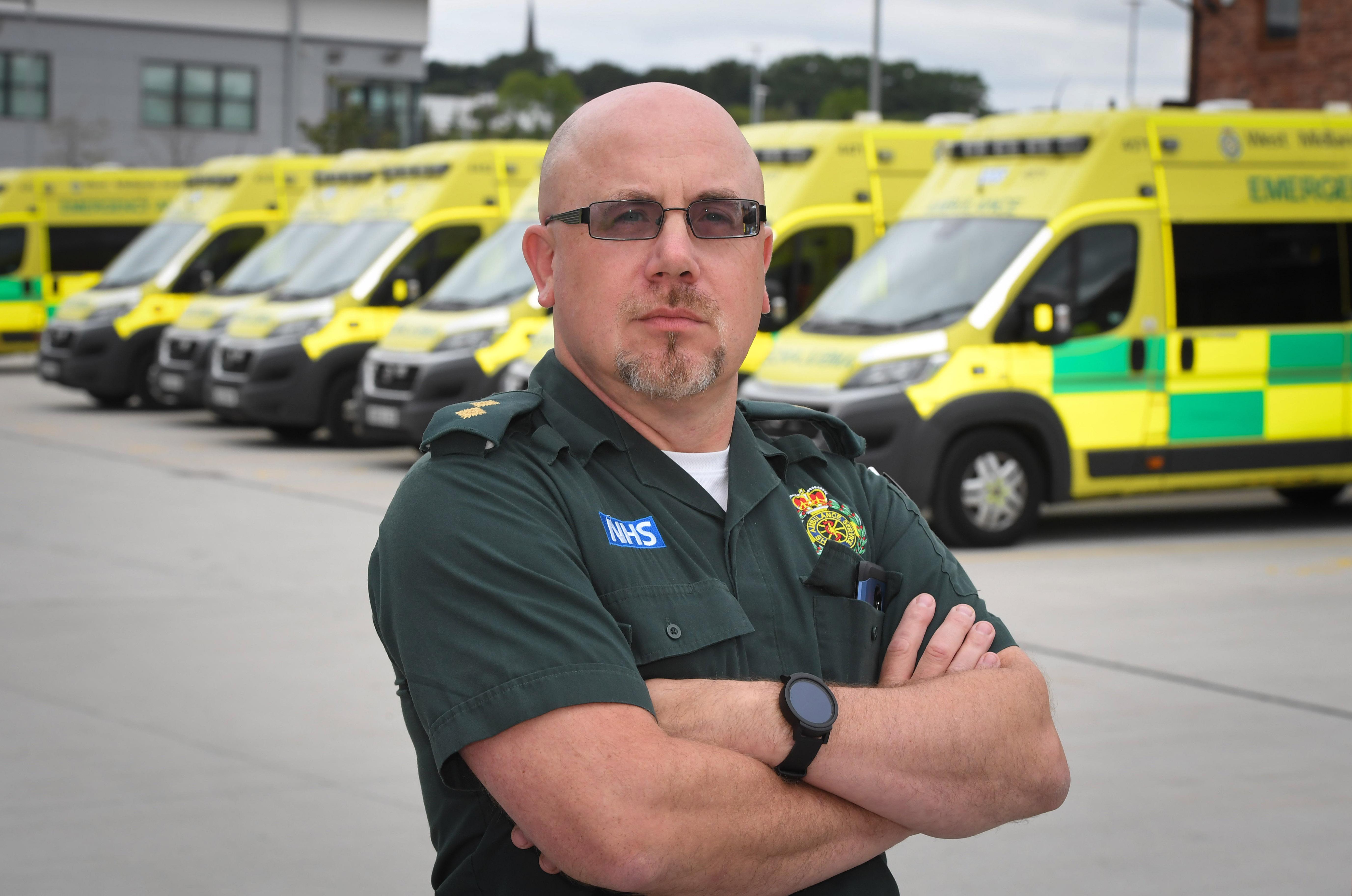 “Many users have mental health issues, many also use other drugs. But heroin is £10, this is £2. It’s a no-brainer why they’re using it.”

One of his front-line team, Lisa Bithell, is facing an agonising two-month wait for the results of an HIV test after a Monkey Dust user spat in her eye.

Mum-of-three Lisa, 43, recalls: “We were called to a man on Monkey Dust who had jumped on someone’s shed then given himself a shower with a hose pipe.

“Police grappled him on to the lawn and handcuffed him. When we got him in the ambulance he was like a wild animal. He was tiny and of slim build but it took six people to hold him down when we got to the hospital. 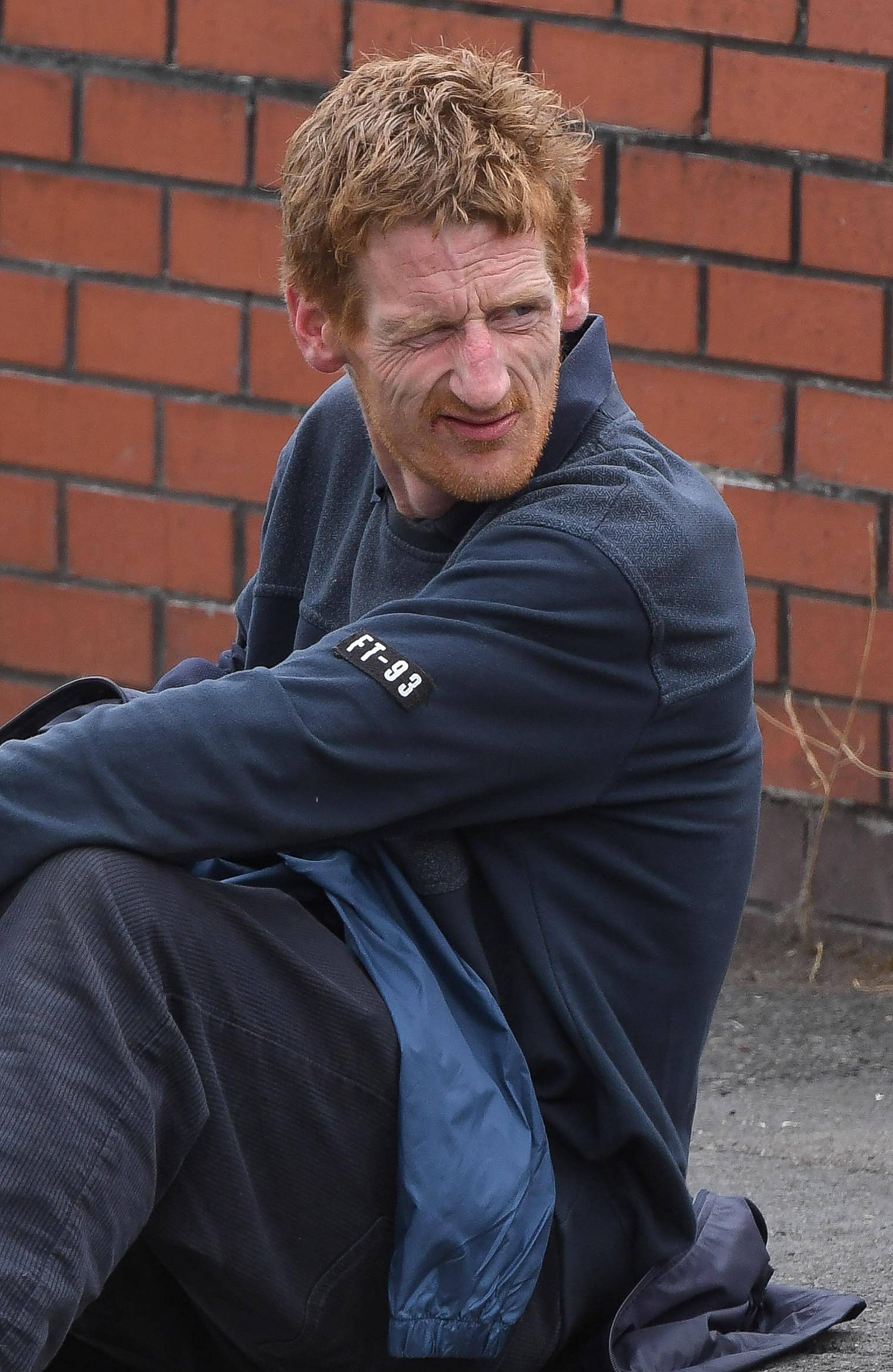 “I was furthest away from him but it was like he had a second wind. He threw them all off, sat up and spat at me. It went straight in my face.

“I had tests for infectious diseases — he was classed as high risk. I won’t know the results for two months.

“I’ve got kids, so I can’t sit around moping. If I’ve got something I’ll have to deal with it then, wont I?

“We get one Dust user nearly every shift. We were called to six in one shift last week.” 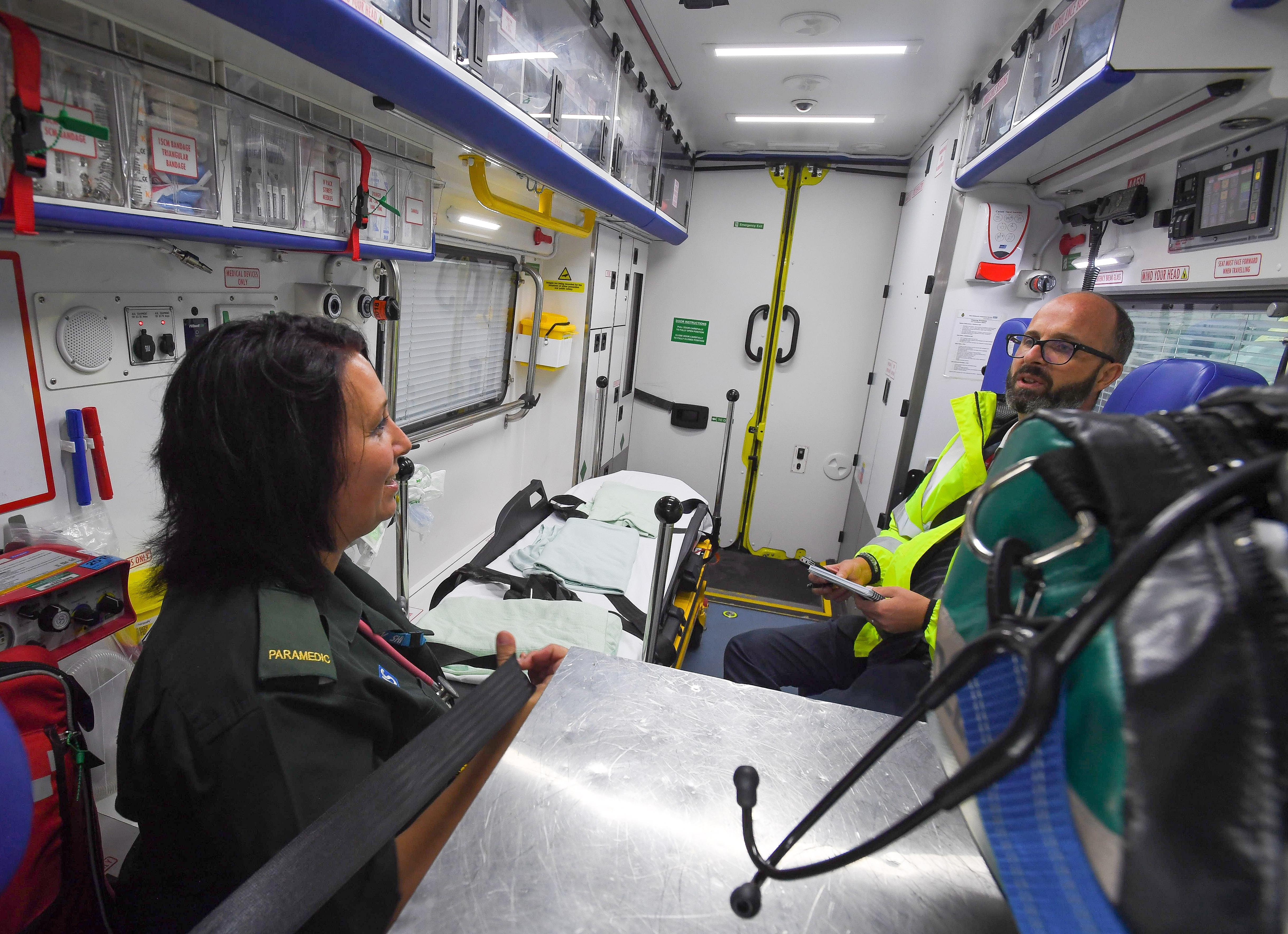 Staffordshire Police say the man-made drug is causing “sizeable and complex demand for the police and health services”.

Officers have responded to around 950 incidents in the past three months alone.

PC Rich Frost said: “When you try to restrain them it’s like you are dealing with someone who thinks they are the Incredible Hulk. The strength is unbelievable.”

In a video released by police a man believed to be on Monkey Dust is seen on the roof of a house, before falling off and landing on a car. He then leaps up and grapples with cops. 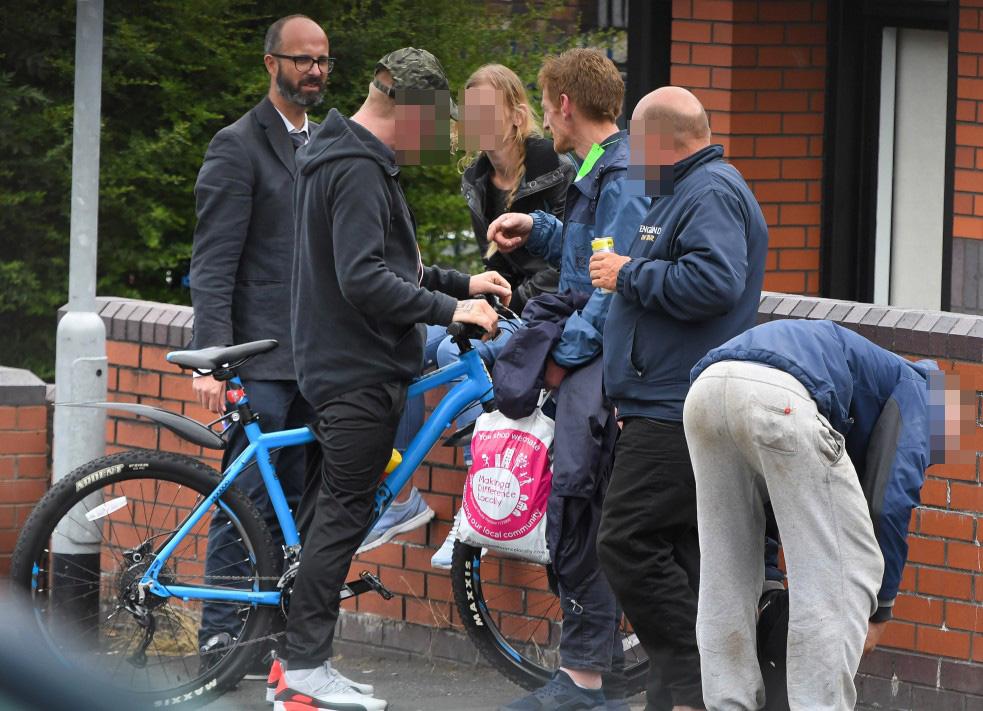 “They’ll lash out, punch, bite, spit. We can’t restrain them, we don’t have handcuffs so we have to call the police. And while we wait we have to deal with them in the back of an ambulance.

“They will try to tear the ambulance apart. They will destroy anything they get their hands on. The ambulance then has to be repaired, which can cost thousands. It’s horrendous and getting worse.”

The most serious cases are taken to The Royal Stoke Hospital Emergency Centre. 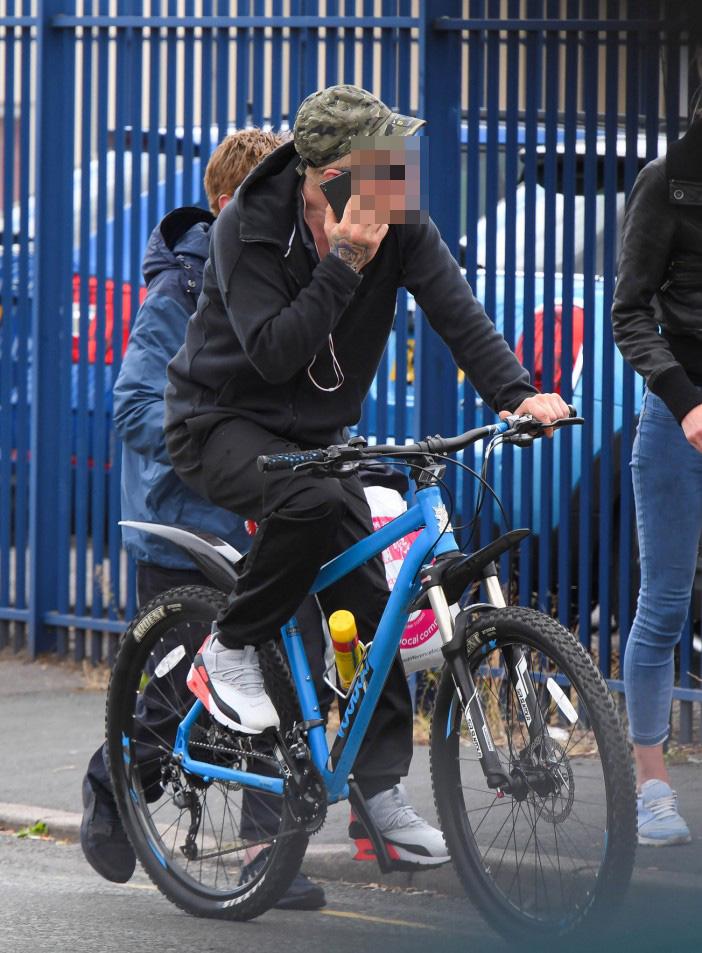 Consultant Dr Chris Pickering says: “The only way to calm them is sedation. We are talking massive, anaesthetic-type doses to allow them to start to come down.”

The pages of Stoke’s local paper, The Sentinel, bear witness to the havoc the drug has wrought on the city of 260,000.

Incidents this year include a paranoid user screaming “the paedophiles are after me” and driving a van into several houses.

A dealer was found with 22g of Dust after driving through a suburb at 80mph, while another was caught with 16 wraps of the drug stashed inside a Kinder egg. 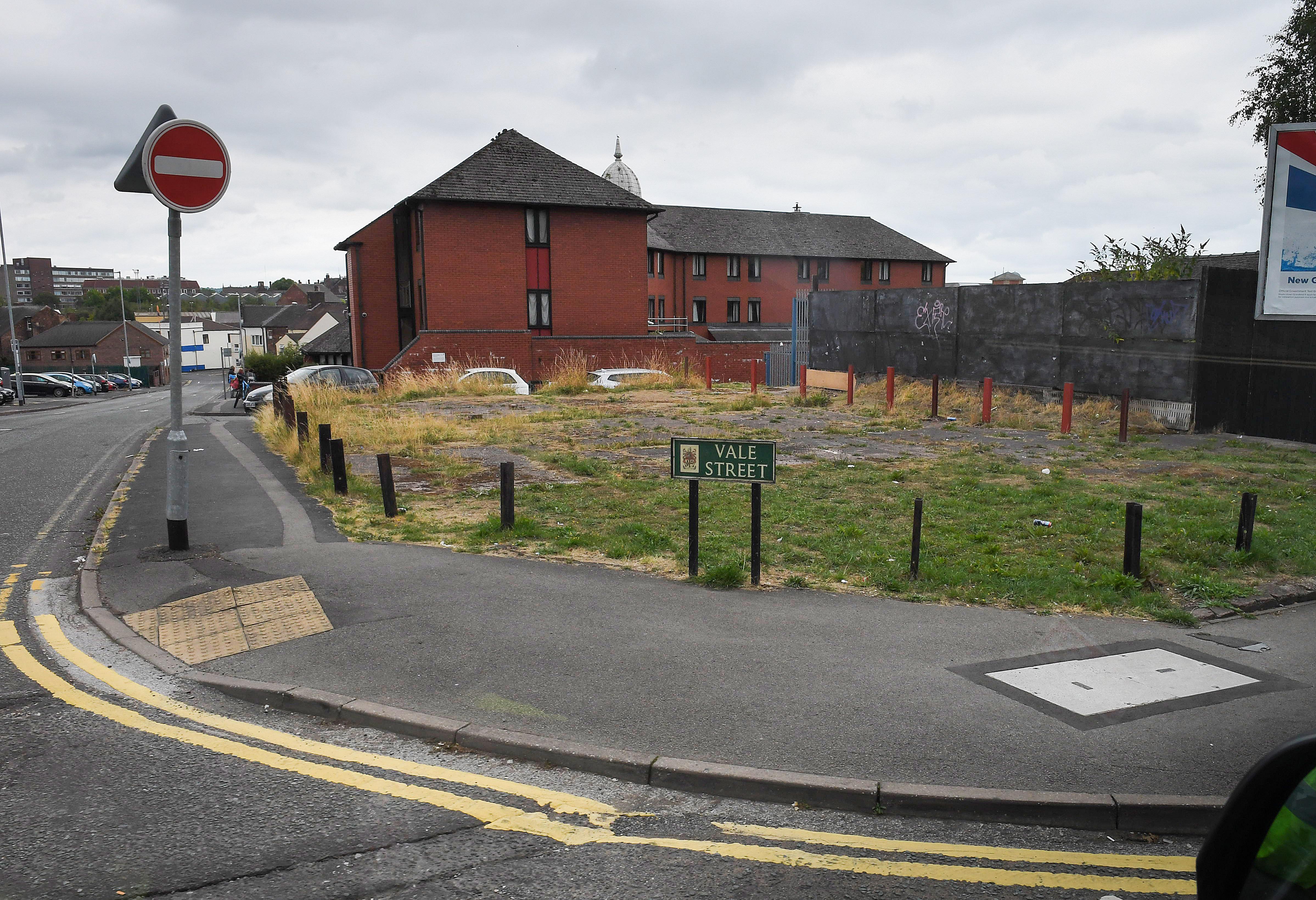 They were either fined or jailed.

In 2013 a dealer was jailed after paying £4,000 by Western Union transfer to import Dust wholesale from China.

It is believed the Far East is one of several sources of the drug, with other batches thought to be made in UK labs from ingredients bought on the dark web.

Chef Molly Lawton, 19, from Stoke, said: “At night I won’t go out, as that’s when the people on drugs tend to come out. You see someone on Monkey Dust swinging their arms and screaming — that would frighten me to death.”

Police fear social media is helping attract users. Cmdr Simon Bray, the National Police Chiefs Council lead on drugs, says: “It is not a concerted plan, but once someone has had Monkey Dust and starts extolling its virtues or selling it locally, dealers respond.”

Dust has already claimed a life in Stoke.

Kelvin Sargeant, 38, was found dead at his home last year after stealing Monkey Dust and other drugs from a dealer. 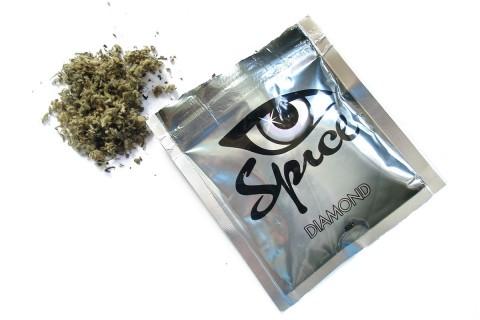 What is it? Synthetic cannabinoid designed to mimic the effects of cannabis. Normally sold in “herbal” smoking mixtures. Is sprayed with man-made, mind-altering chemicals.

What effect does it have? Can make users feel happy and relaxed, giggly, hungry and talkative. It has been dubbed the “zombie drug”, as it has been known to cause severe hypertension, anxiety, hallucinations, seizures – and death.

What class of drug is it? Considered a legal high until it became Class B in 2016. 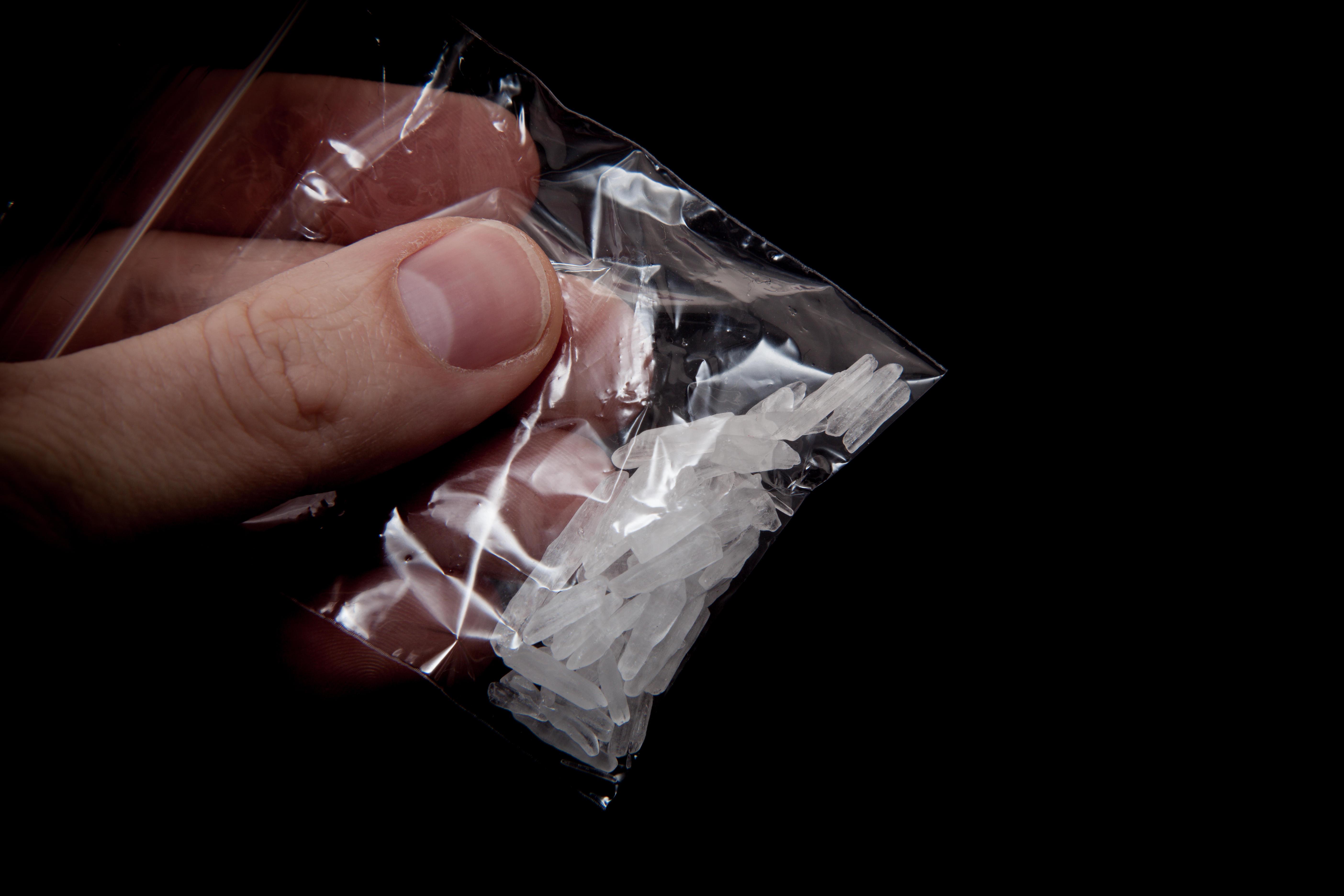 What is it? Usually in the form of a white powder or a pill, meth-amphetamine is a stimulant made in labs.

What effect does it have? Meth gives users an intense high, leaving them exhilarated and alert, but can also make users paranoid and aggressive. It is extremely addictive and there is evidence long-term use can cause brain damage.

What class of drug is it? Class A – so it is illegal to have for yourself, give away or sell. 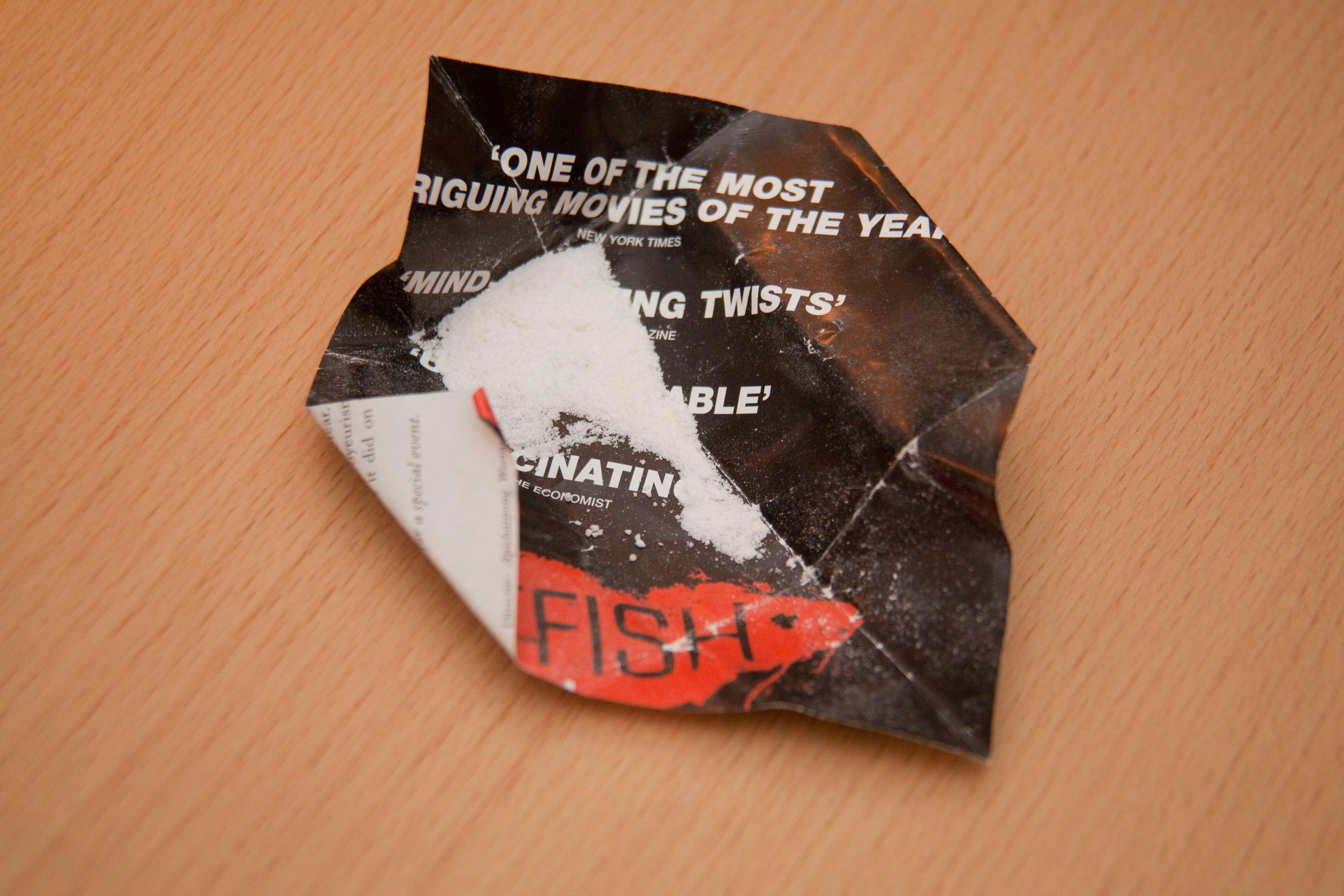 What is it? Powerful general anaesthetic which stops users feeling pain. Used for surgery on humans and animals.

What effect does it have? Can cause paralysis. This has been likened to having a near-death experience sometimes called “entering the k-hole”. Can cause confusion, agitation, panic attacks and memory loss. Frequent use has been associated with depression.

What class of drug is it? Class B – illegal to have for yourself, give away or sell. 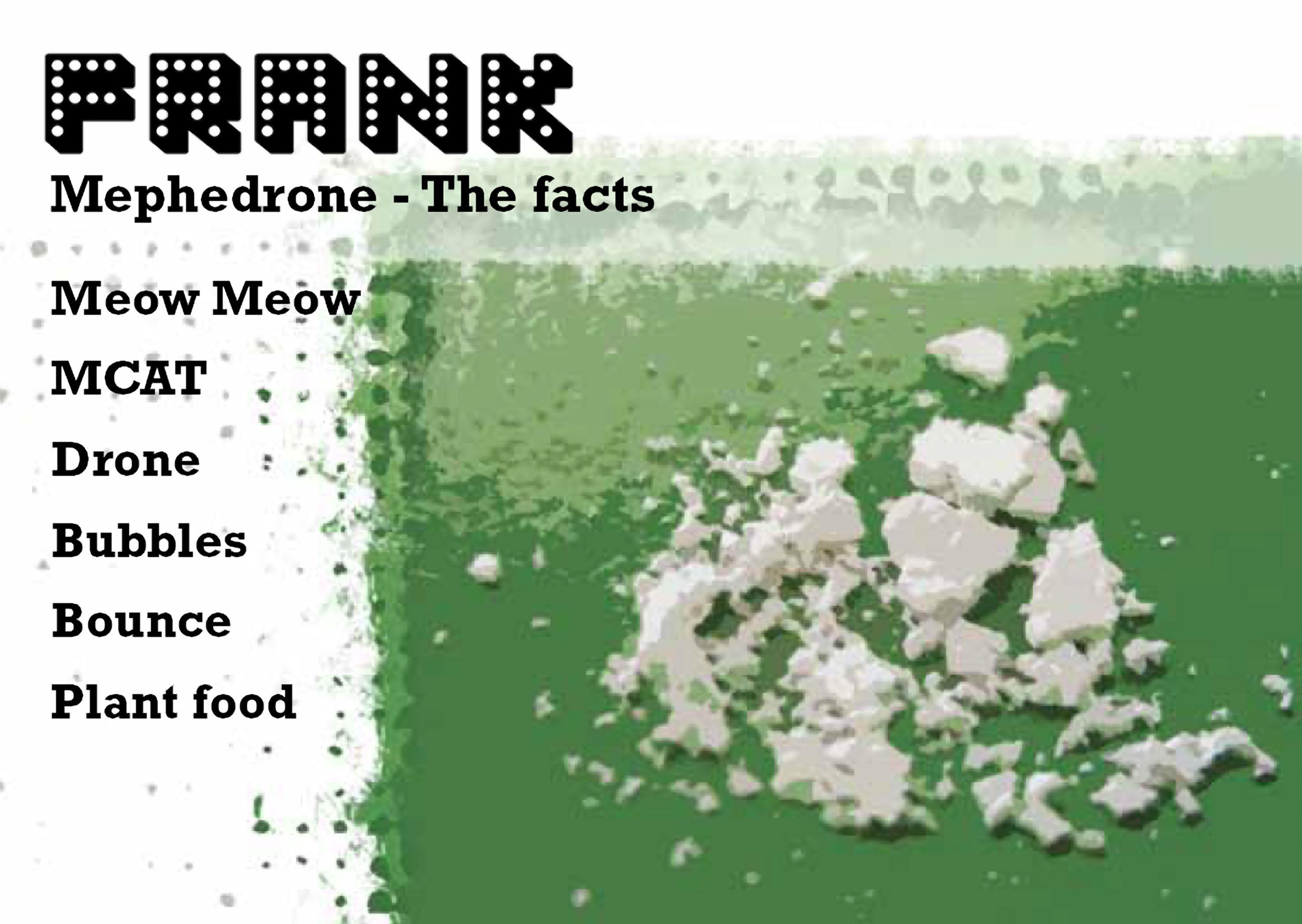 What is it? Sometimes called “meow meow” m-cat is short for mephedrone. A powerful stimulant and part of a group of drugs closely related to amphetamines including speed and ecstasy.

What effect does it have? Euphoria, alertness and feelings of affection towards the people around you. But it can also cause anxiety, paranoia and overstimulate your heart, circulation and your nervous system, with risk of fits.

What class of drug is it? Class B. 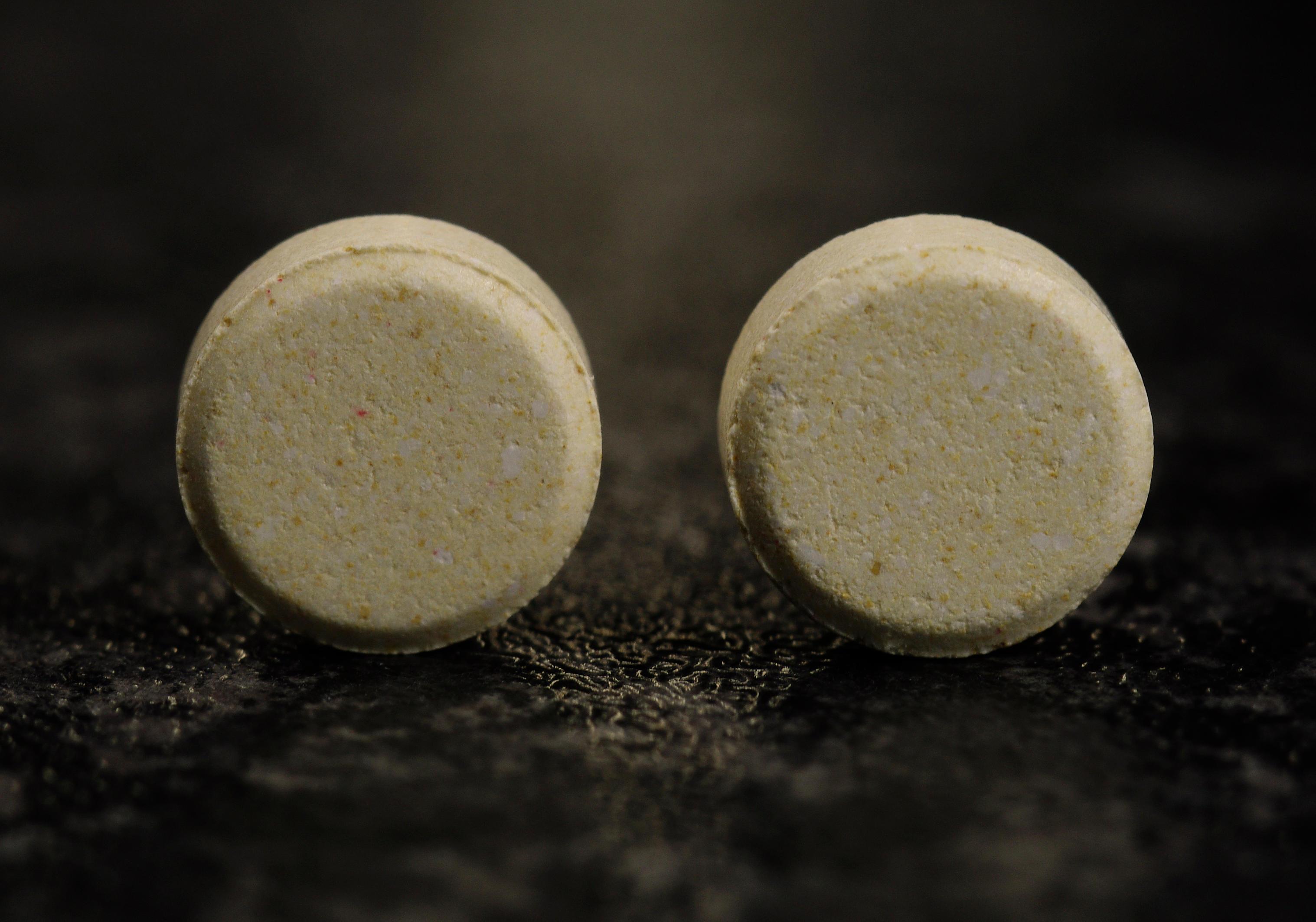 What is it? Drugs of the 2C family, including 2CB, 2CT-7 and 2CI, are like a cross between ecstasy and LSD.

What effect does it have? As hallucinogens or psychedelics, they can make you see objects and reality in a distorted way. Can give you an energy buzz but can also cause headaches and nausea. At high doses, this becomes more serious, with users in confused, agitated or delirious states.

What class of drug is it? Class A.