Russia’s largest gas field is ablaze after a pipe burst early Thursday, sending a huge plume of flames soaring into the sky.

Energy giant Gazprom said the blaze broke out around 2.30am at the Urengoyskoye gas field in the Yamalo-Nenets region of Siberia.

Urengoyskoye is the world’s largest active gas deposit with supplies mainly destined for Europe via the Yamal-Europe pipeline.

Though Gazprom says the fire has been contained, the news will inevitably spark fears of supply disruptions and further price hikes in Europe which is already in the midst of an energy crisis. 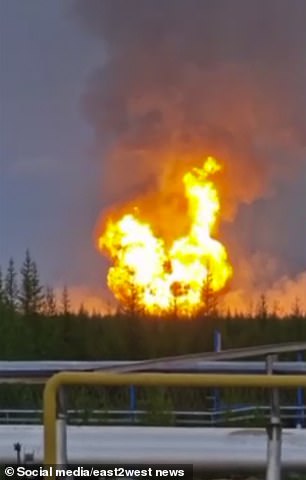 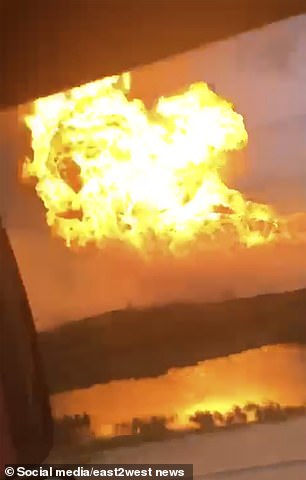 Russia’s largest gas field – Urengoyskoye, in Siberia – burst into flames today after a pipe ruptured around 2.30am, sending a plume of flames into the sky

The last time a fire struck the region – in August last year – it led to a sizable drop in production and saw prices jump.

However, that blaze took place at a processing facility through which large amounts of natural gas passes on its way to Europe.

Gazprom said it is still analysing the extent of the damage, but there was no interruption to supplies.

‘The fire occurred at 2:30 am on June 16,’ said a spokesman. ‘There were no casualties. At 4 am the fire was extinguished.

It is the latest in a series of blazes at key Russian installations amidst the war with Ukraine, which has led to suspicions of sabotage.

Blazes have largely targeted facilities with links to the military or government, and has included at least one other which hit a pipeline supplying Europe.

Two fires broke out at the Transneft-Druzhba Oil Depot, located in the city of Bryansk, early on April 25 after suspected Ukrainian missile strikes.

The Druzhba pipeline is one of the main routes for Russian oil to reach Europe, and the attack came as the EU debated an embargo on the fuel.

Ukraine has not commented on any of the fires, and it is unclear whether all of them have been coordinated from Kyiv.

However, sites close to the Ukraine border are thought to have been attacked with missiles, drones and helicopters.

Meanwhile, Ukrainian special forces are though to be operating behind Russian lines to hamper its military efforts.

And some fires are thought to be acts of Russians who oppose the war, or are fearful of being conscripted to go and fight.

More than a dozen military enlistment offices – which are used to register Russian conscripts who must serve in the armed forces for a year between the ages of 18 and 27 – have been targeted with Molotov Cocktails.