New York: In the first major hiccup of the rollout of the coronavirus vaccine across the US, states this week found themselves scrambling to adjust as they received word they would get between 20 per cent and 40 per cent less vaccine next week than they had been told.

States were given estimates that turned out to be based on vaccine doses produced, not those that had completed quality control and were releasable. Only on Wednesday and later were states informed of the actual numbers. 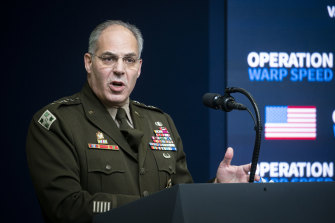 "The ripple effect is huge," said Claire Hannan, executive director of the Association of Immunisation Managers. "The planning piece is critical. We cannot roll this vaccine out on the fly."

After three days of confusion, the source of the problem was finally clarified on Friday night, US time, by Governor Jay Inslee of Washington state. He tweeted he'd had a "very productive" conversation with General Gustave Perna, chief operating officer for Operation Warp Speed, the administration's COVID-19 treatment and vaccine program.

"That discrepancy was the source of the change in allocations," Inslee tweeted. "It appears this is not indicative of long-term challenges with vaccine production."

During a news conference on Saturday morning, US time, Perna said the unexpected shortfall in shipments of the Pfizer-BioNTech vaccine was his fault.

"I failed. I'm adjusting. I am fixing and we will move forward from there," Perna told reporters in a telephone briefing.

“I want to take personal responsibility for the miscommunication,” he said. “I know that’s not done much these days. But I am responsible. … This is a Herculean effort and we are not perfect."

There’s a distinction between manufactured vaccine and doses that are ready to be released. The finished product must undergo “rigorous quality control and sterility tests,” which can take up to a month, the Department of Health and Human Services said.

The Food and Drug Administration then must receive a certificate of analysis 48 hours before the manufacturer ships a batch, the government said.

Perna said the government now is on track to get approximately 20 million doses to states by the first week of January, a combination of the newly approved Moderna vaccine and the Pfizer-BioNTech vaccine.

Perna said 2.9 million Pfizer-BioNTech doses have been delivered to states so far.

The sudden shift and lack of clarity for several days represent a huge headache for states as they scramble to adjust their vaccination programs.

A letter sent to governors on Friday night from Health and Human Services explained the discrepancy as confusion.

"We want to provide further perspective on the planning numbers generated in mid-November that are being compared with official weekly allocations. Official allocation numbers are only made available the week prior to distribution as they are based on the number of vaccine doses that have met FDA certification standards and have been released to the US government," it said.

"We hoped it was clear that those figures and the underlying projections from the companies were for planning purposes and could be refined, and that if the number of releasable doses from a manufacturer changed, the allocations to jurisdictions would change, too," the letter went on to say.

That was in fact not clear to states. Governors nationwide have been asking for details and explanations since Wednesday.

"We are working to gain confirmation and additional details from our federal partners. It will take us some time to work through next steps and adjust our planning," Iowa Department of Public Health spokeswoman Sarah Ekstrand wrote in a news release on Wednesday.

In Michigan, Governor Gretchen Whitmer said in a news conference that her state's doses were being held up and that she couldn't get anyone on the federal level to explain the discrepancies.

"I can't get a call back," she said. "I know that states across the country are grappling with the same thing, this isn't just an issue here."

Oregon Governor Kate Brown said on Twitter her state's doses had been reduced by 40 per cent and she was trying to get accurate information for week-to-week planning.

New Jersey was told it will receive 20 per cent fewer doses than expected. "I don't think we've gotten a satisfactory reason why," Governor Phil Murphy said.

In Massachusetts, a spokesperson for the state's COVID-19 Command Centre said on Friday morning that the state has been notified it will receive 17,100 fewer doses – a 28 per cent decrease from what it was expecting.

HHS had early given a slightly different explanation, saying it was a "misunderstanding." In a statement Friday afternoon, HHS said there had been "some confusion between planning and training numbers provided in mid-November and actual official weekly allocations, which are only available the week prior to distribution".

There was no confusion on their part, Washington state officials said.

The state was told as recently as December 9 that it was getting 74,100 doses of the vaccine, said Mike Faulk, press secretary for Governor Inslee.

"The 74,100 number was provided multiple times in multiple forms – by phone, email and in the federal database. It was provided in an email directly from Operation Warp Speed to the Department of Health," Faulk said. "This is not a 'mid-November' number," he said.

Then on Wednesday, Washington officials got a call from the Centres for Disease Control and Prevention telling them the number of doses they would be getting next week would instead be 44,850. No explanation for the reduction was given.

This was highly disruptive and threw weeks of work into disarray.

"Regardless of our allocation, we need predictability and accuracy so we can properly plan to make sure our vaccine effort is successful," said Casey Katims, Inslee's director of federal affairs.

The discrepancy represents a major breakdown in communicating the most essential information states rely on for vaccine rollout, said Dr. Kelly Moore, associate director of immunisation education with the Immunisation Action Coalition.

"The number one question you have if you're a state vaccination program is: 'How many doses do I have?' Everything you do flows from the answer to that one question," she said.

A last-second change of this magnitude in states' vaccine projections represents "an unforced error," she said, referring to a missed point in tennis due to a player's own blunder and not their opponent's skill.

"The states are real people making real plans based on the numbers. They deserve the truth, whatever it is," she said. "They can handle it. What they can't handle is a 40 per cent drop with less than a week's notice."