Home » World News » 'I just want to get my baby to a proper home': Lombok reels from quake

Lombok: Six weeks after a devastating earthquake flattened parts of the Indonesian island of Lombok, 2277 families affected – or just 1 per cent – have received money promised to rebuild their homes.

In Pemenang, one of dozens of villages along the coast road that was smashed by the magnitude 7 earthquake on August 5, local man Hanan and his wife Reniatun welcomed a baby girl, Akila, into the world just 11 days ago. 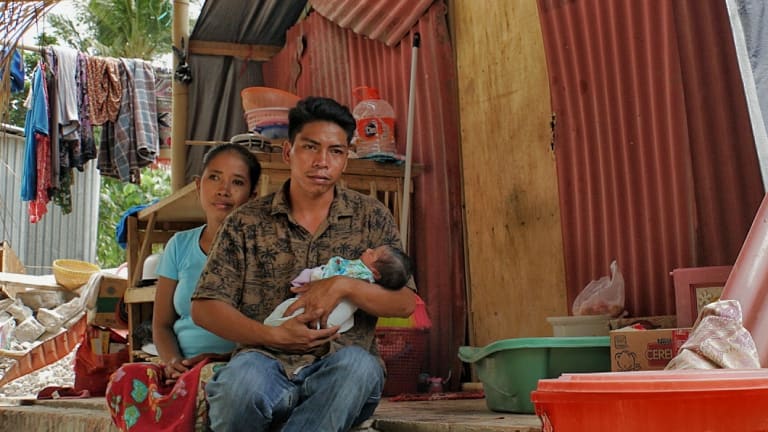 Hanan holds baby Akila, his wife Reniatun behind him, in their makeshift home.

They are just three of the estimated 400,000 people now described as refugees on the island because they have lost their homes.  They now live in a tin and tarpaulin shack – which is more than thousands of people who are living in tents have.

"Our house was destroyed. We used what we can salvage from the old house to build a temporary housing. It's one room with the kitchen in the front. I don't know when and how long until we will receive the government assistance," he says, tears brimming in his wife's eyes as he speaks.

"So far other than some logistics [food and water], there's nothing. I just want to get my baby and wife to a proper home, sooner rather then later." 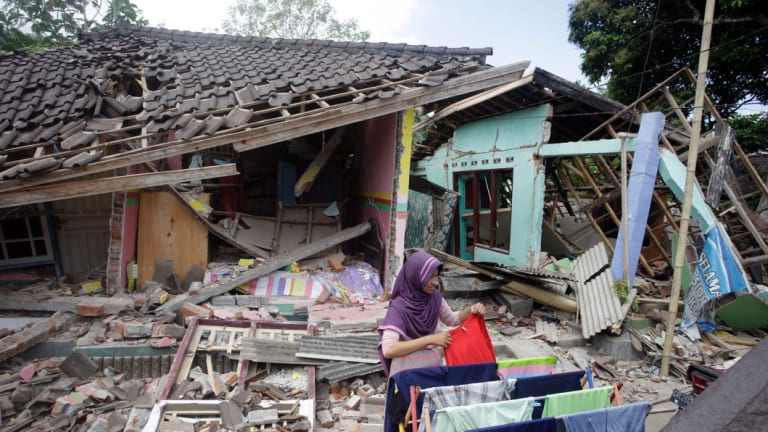 A woman dries her laundry in front of her home shortly after the quake in West Lombok.

Authorities have also declared a health emergency in West Lombok as malaria spreads on the island. So far, 128 people – including one baby, 10 toddlers and a pregnant woman – have contracted the mosquito-borne infection.

There are growing concerns this outbreak will spread, and dengue will come once the wet season arrives in a month or two.

The Indonesian government has promised families whose homes have been severely damaged 50 million rupiah ($4600) to start again and rebuild. This sum could pay for a modest home, but is likely not enough to rebuild a larger house.

Twenty-five million rupiah has been promised to families whose homes suffered medium damage, and 10 million will be offered for light damage. 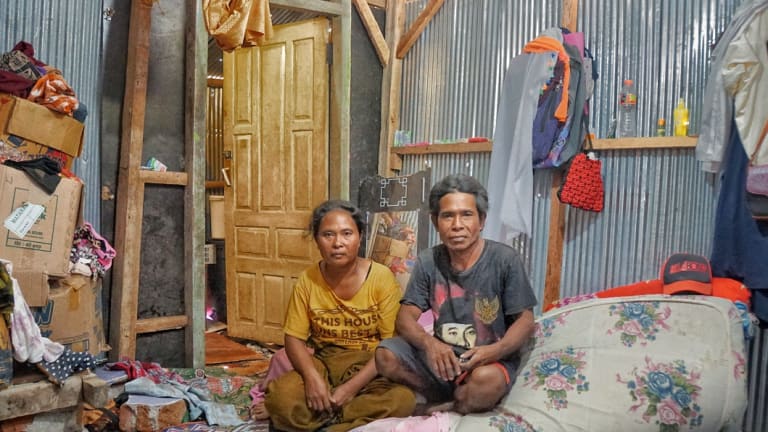 Lombok refugees Ismail, right, and his wife  Suhaini in their temporary home.

Hanan's neighbour Ismail and his wife Suhaini – who Fairfax Media interviewed six weeks ago – are also living in a one room shack after their home was destroyed.

"Other than the salvaged rubble and some of our clothing, everything else is gone. Even our kitchen utensils," he says.

"Our house was registered as severely damaged, we should be getting the full 50 million. It's not enough to build a house, I think, it would cost 80 million at least. I don't know what we will do with it, we don't have it yet." 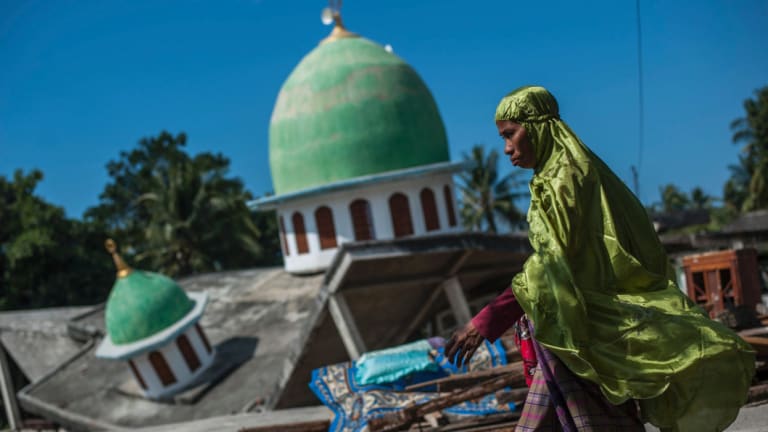 A Muslim woman walks past a mosque collapsed during the August 9 earthquake in Gangga, Lombok Island.

Ismail is a wearing a T-shirt with the face of the first president, Soekarno, on it. Is this a political message?

No, he says, laughing ironically.

It's just a T-shirt he was given by an aid worker.

Indonesia has already been criticised for its slow response to the August 5 earthquake, which was followed by weeks of strong after shocks.

But Sutopo Purwo Nugroho, the spokesman for Indonesia's National Disaster Mitigation Agency, the BNPB, defended the government's delivery of the money, indicating most people have received it.

"The rest .. are either still under verification process or are still under bureaucratic processes to get the funds transferred," he told Fairfax Media.

He said the malaria outbreak was concentrated in the Gunung Sari district, in West Lombok, and that fogging – that is, spraying the insects and their eggs – has not worked so far.