Home » World News » I saw a UFO and nobody can see it: Unusual sightings not expected to go to general public, US Navy says

The US Navy has drafted a procedure to investigate and catalogue reports of unidentified flying objects coming in from its pilots. But the service doesn't expect to make the information public, citing privileged and classified reporting that is typically included in such files.

Joe Gradisher, a spokesman for the office of the deputy chief of naval operations for information warfare, said in a statement that the US Navy expects to keep the information it gathers private for a number of reasons. 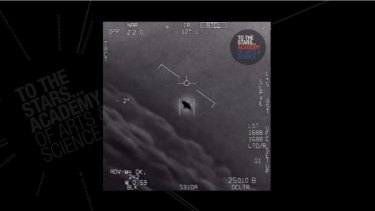 An image from footage shot by the Navy that shows an encounter between US fighter jets and “anomalous aerial vehicles” flying at 25,000 feet. The clip is featured in a video created by the organisation To the Stars Academy.Credit:To the Stars Academy

"Military aviation safety organisations always retain reporting of hazards to aviation as privileged information in order to preserve the free and honest prioritisation and discussion of safety among aircrew," Gradisher said. "Furthermore, any report generated as a result of these investigations will, by necessity, include classified information on military operations."

He added, "Therefore, no release of information to the general public is expected."

The US Navy's recent decision to draft formal guidelines for pilots to document encounters with unexplained aerial phenomena comes after the revelation in late 2017 that the US Pentagon ran a secret "UFO" office that spent $US22 million ($31.3m) over five years to collect and analyse "anomalous aerospace threats". Funding for the office, known as the Advanced Aerospace Threat Identification Program, or AATIP, officially ended in 2012, though operations continued.

Among other things, the program resulted in the release of footage from the cockpit cameras of military aircraft, which appeared to document oval-shape vessels that resemble flying Tic Tacs.

Reports of curious sightings from military aircraft aren't new. During World War II, Allied military pilots witnessed unexplained objects and fireballs that they dubbed "foo fighters". A number of official government investigations looked into such phenomena in the postwar period.

Now, the US Navy has agreed to a more formalised process for cataloguing and investigating reports from pilots, a decision welcomed by former US officials who want the military to take the matter seriously and remove the stigma in the armed forces of reporting such incidents.

Even though the Navy indicated that it has no plans in the imminent future to release the data, unclassified portions of the information or broad overviews of the findings could come out, according to Luis Elizondo, an intelligence officer who ran AATIP before leaving the US Pentagon.

"If it remains strictly within classified channels, then the 'right person' may not actually get the information. The right person doesn't necessarily mean a military leader. It can be a lawmaker. It can be a whole host of different individuals," Elizondo said.

For example, in the future, the US Navy theoretically could release broad statistics about the number of sightings and the results of the follow-up investigations without disclosing any classified information. Even if the information isn't made available to the public, it could be reported to US Congress.

Frustrated that a potential security threat wasn't receiving the attention and funding he thought it deserved, Elizondo left the US Pentagon in 2017 and joined a start-up that promotes UFO research for scientific and entertainment purposes. The organisation is collaborating on a six-part History Channel series due out this month that will explore Elizondo's work on the issue.

In an interview, Elizondo praised the US Navy for changing its policy and taking a public stance and credited lawmakers on Capitol Hill for beginning to take the matter seriously. He said he expects the effort to lead to more information gathering and sharing at the US Pentagon and ultimately a better understanding of the "enigma" reported by military pilots.

There is no agreed-upon explanation for some of the sightings reported to AATIP.

Seth Shostak, senior astronomer at the Search for Extraterrestrial Intelligence (SETI) Institute in Mountain View, California, said that regardless of the explanation, it's positive that the military is collecting more information, because it could lead to a relevant discovery about technological equipment or activity by a potential adversary.

Shostak cautioned that sightings of unidentified objects, which military pilots have been reporting for decades, could have a more earthly explanation than activity by an extraterrestrial civilisation.

"If they are here, if they are sailing the skies, you have got to say – they are really great house guests," Shostak said. "They never kill anybody . . . they don't even delay the flights out of Reagan."