Freezing, arid and lifeless, the dusty Jezero crater on Mars is currently an inhospitable desert.

Yet 3.7 billion years, ago it was full of water and could have harboured life, scientists believe.

The first analysis of images from NASA’s Perseverance rover show that the crater was once a 21-mile (34 km) wide lake, which was fed by a river, and which suffered flash flooding. 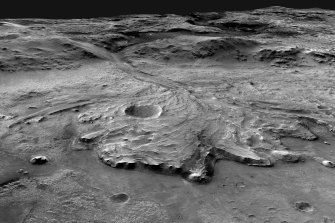 The Jezero Crater, where the Mars lander is.Credit:NASA

Huge boulders now lie in the lake bed after being swept tens of miles downstream by the raging currents, the pictures show. But researchers are most excited by the discovery of layers of fine-grained clay and mudstones at the site because they could preserve traces of ancient life.

Professor Sanjeev Gupta, of Imperial College London, one of the researchers who analysed the images, said: “The finest grained material at the bottom of the delta probably contains our best bet for finding evidence of organics and bio-signatures. We’re not expecting to find fossils, but we could find evidence of microbial life.

“We’ve already drilled two samples and put them into the rover and we will be driving to the region in the next few years to take 38 samples and then there will be a joint European Space Agency and NASA mission that will retrieve the samples so we can analyse the rocks on Earth. 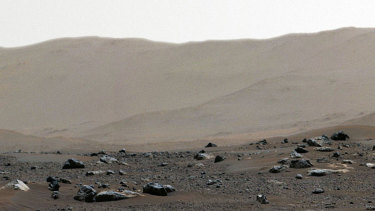 The Perseverance Mars rover shows the rim of Jezero Crater on the surface of Mars. Credit:NASA

“I think finding life is entirely likely. It would seem surprising that life only formed on Earth and these are definitely the right rocks to look for it.”

Perseverance landed on February 18 in the Isidis Planitia region, just north of the equator in the eastern hemisphere of Mars, around one mile from the delta.

The region was chosen because images taken by orbiting spacecraft showed the area resembled river deltas on Earth, where layers of sediment are deposited in the shape of a fan as the river feeds into a lake.

But without being on the ground it was impossible to know if the patterns were formed by the wind or other geological processes. 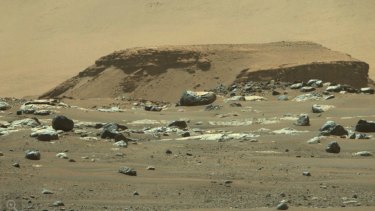 Perseverance’s view of the Delta in Jezero Crater, from its landing site. Credit:NASA/JPL

The team says it suggests that there was steady water flow, consistent with a warm and humid Martian climate 3.7 billion years ago.

“If you look at these images, you’re basically staring at this epic desert landscape. It’s the most forlorn place you could ever visit,” says Benjamin Weiss, professor of planetary sciences in Massachusetts Institute of Technology’s Department of Earth, Atmospheric and Planetary Sciences and a member of the analysis team. 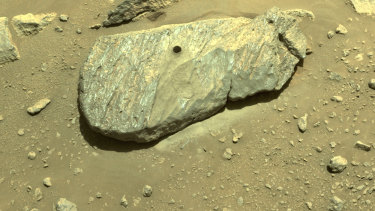 The hole drilled by the Perseverance rover during its second sample-collection attempt in Mars’ Jezero Crater. Credit:AP

“There’s not a drop of water anywhere, and yet, here we have evidence of a very different past. Something very profound happened in the planet’s history. Without driving anywhere, the rover was able to solve one of the big unknowns, which was that this crater was once a lake.

“Until we actually landed there and confirmed it was a lake, it was always a question.”

The lake was thought to be metres deep, with water levels reaching high enough to break through the eastern crater rim, where images taken from orbit show an outflow event occurred. Researchers found that the size of Jezero’s lake fluctuated greatly over time, with its depth rising and falling by tens of feet before eventually disappearing altogether.

Metre-wide boulders, weighing several tons were found to have come from outside the crater, and were probably part of the original bedrock. The floods required to move the boulders were likely to have raged at 32 km/h and moved up to 10,500 cubic feet of water per second.

As well as providing more details about Mars, sampling the boulders could give important clues about Earth’s early geology which has since been destroyed by tectonic activity.

“The most surprising thing that’s come out of these images is the potential opportunity to catch the time when this crater transitioned from an Earth-like habitable environment, to this desolate landscape wasteland we see now,” added Professor Weiss.

“These boulder beds may be records of this transition, and we haven’t seen this in other places on Mars.”

Sue Horne, head of Space Exploration at the UK Space Agency, said: “These ancient environments provide the perfect place for the Perseverance rover to search for signs of past life on Mars.”

The research was published in the journal Science.