An Iranian military chief warned that attacks on his country would result in impounded oil tankers or shot down drones after nations condemned Tehran for the Saudi missile strike.

The US, Britain, Saudi Arabia and European powers have blamed Iran for the September 14 attack on the oil facility. Iran denies involvement and has blamed the Houthi rebels. 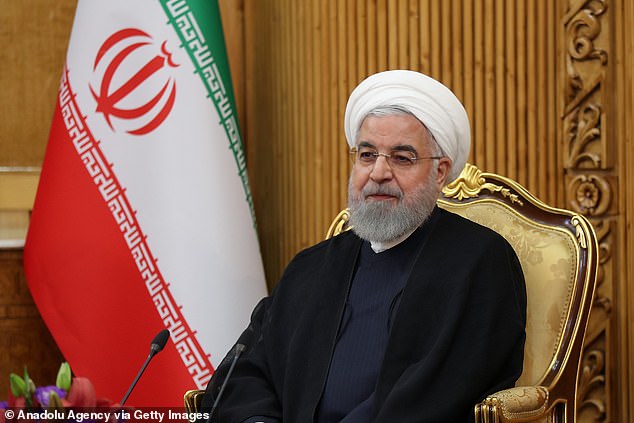 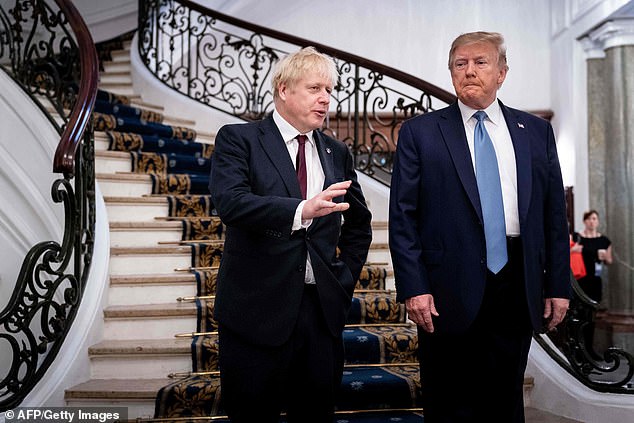 Donald Trump praised Boris Johnson on Monday for joining him in demanding a new Iranian nuclear agreement, ‘That’s why he’s a winner,’ the President added (pictured: the pair in Biarritz last month)

The three governments said: ‘It is clear for us that Iran bears responsibility for this attack. There is no other explanation.

‘The time has come for Iran to accept a long term negotiation framework for its nuclear program, as well as regional security issues, which include its missile programs.’

They also urged Tehran to choose dialogue over ‘further provocation’.

Despite Saudi Arabia blaming Iran, Major General Baqeri said today, Iran had no hostility towards the Saudis or their allies, the UAE.

Boris Johnson blamed Iran for the attacks on Saudi Arabian oil facilities for the first time ahead of a meeting with the country’s president this week.

The Prime Minister told press on board the RAF Voyager to New York that he will meet President Hassan Rouhani at the United Nations General Assembly on Tuesday.

Rouhani is expected to present a plan for creating security in the Gulf in cooperation with other countries in the region during a discussion this week.

Mr Johnson said on Sunday that the UK attribute blame on the Islamic republic with a ‘very high degree of probability’, as he declined to rule out military intervention.

He said he also plans to raise the case of Nazanin Zaghari-Ratcliffe after his previous interventions in the British-Iranian mother’s plight were heavily criticised.

Johnson said Monday at the United Nations in a Sky News interview, ‘Whatever your objections to the old nuclear deal with Iran, it’s time now to move forward and do a new deal.’ 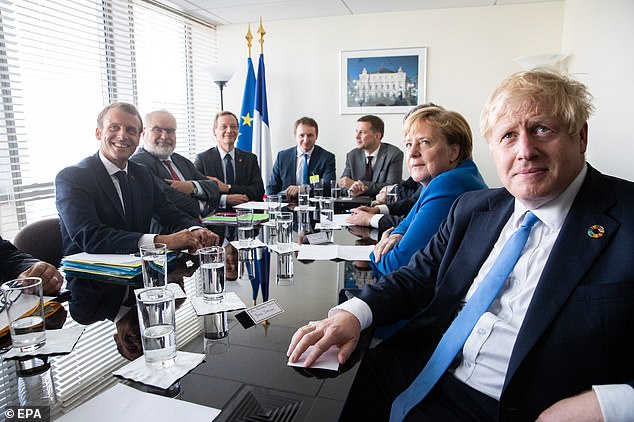 Boris Johnson, Emmanuel Macron and Angela Merkel (pictured together after the UN climate summit in New York yesterday) have released a statement blaming Iran for the Saudi oil facility attack

‘I respect Boris a lot, and I’m not at all surprised that he was the first one to come out and say that,’ he said.

The US and Saudi Arabia have already accused Iran of being behind the September 14 raids on Aramco Oil, the world’s largest oil processor and an oil field, which have since caused a spike in prices. Tehran has consistently denied being involved.

It comes after a huge display of military strength in the Iranian capital on Sunday, when President Rouhani warned the West to ‘stay away’ from the Gulf as soldiers marched to mark the 1980 Iraqi invasion.

Mr Johnson gave the first attribution of blame from the UK before landing in the US in the early hours of Monday.

He said on his way to New York: ‘I can tell you that the UK is attributing responsibility with a very high degree of probability to Iran for the Aramco attacks.

‘We think it very likely indeed that Iran was indeed responsible for using both UAVs (unmanned aerial vehicles), both drones and cruise missiles. 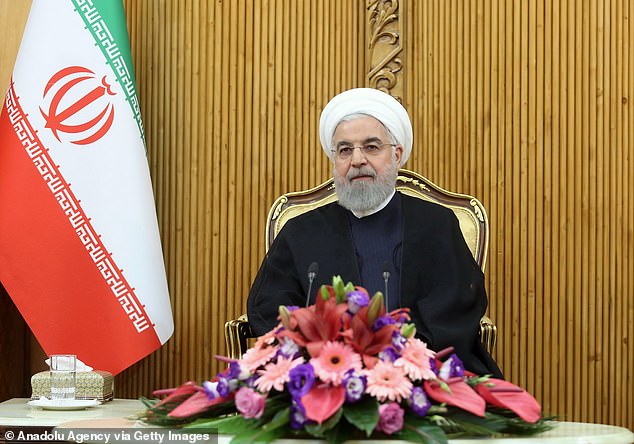 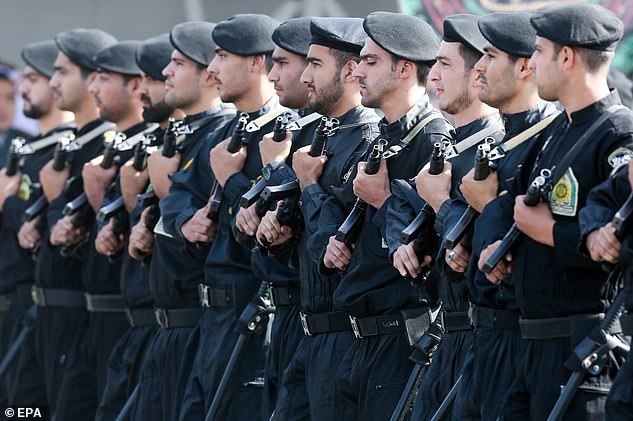 Rows and rows of soldiers marched in Tehran, Iran, are pictured Sunday to mark the Iraqi invasion in 1980, which led to an eight-year-long war

‘Clearly the difficulty is, how do we organise a global response? What is the way forward?

‘And we will be working with our American friends and our European friends to construct a response that tries to deescalate tensions in the Gulf region.’

The PM said he would ‘follow very closely’ American proposals to do more to defend Saudi Arabia, with Tehran’s ire being further provoked by the US-led coalition patrolling the region’s waterways.

‘And clearly if we are asked either by the Saudis or the Americans to have a role then we would consider in what way we could be useful,’ he said.

Asked if military action was possible, he replied: ‘We will consider in what way we could be useful if asked and depending on what the exact plan is.’ 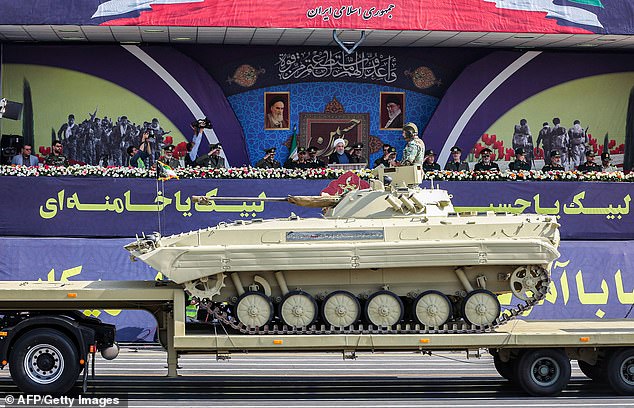 The annual parade in the capital Tehran showcased tanks, drones and missiles – including the Khorramshahr which is said to have a range of 2,000 kilometres 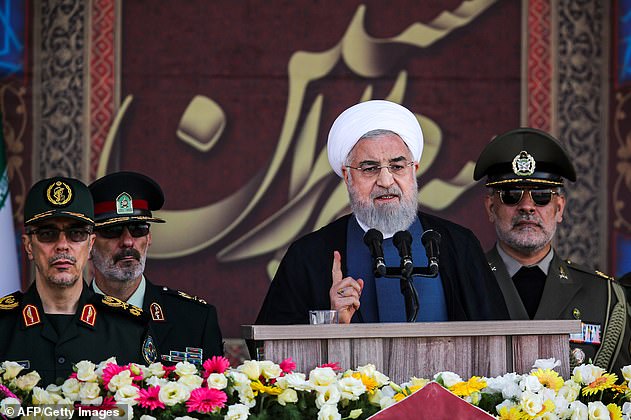 President Rouhani, pictured Sunday, called on foreign powers to ‘stay away’ from the Gulf, saying: ‘The farther you keep yourselves from our region and our nations, the more security there will be’

Sanctions also remained on the table. The PM was speaking ahead of a joint meeting with French President Emmanuel Macron and German Chancellor Angela Merkle at the UN.

It was billed as an E3 meeting to discuss the Aramco attacks, but Brexit talks are also expected to be dominant.

Mr Johnson is also set to meet US President Donald Trump. They have already discussed the need for a ‘united diplomatic response’ to the attacks.

The PM said he would bring up the case of Ms Zaghari-Ratcliffe and other dual nationals being held in Tehran when he meets Mr Rouhani.

Mr Johnson has come under intense criticism over his handling of the British-Iranian mother’s case as foreign secretary.

She is midway through a five-year jail sentence for spying charges, which she has always denied.

‘In the course of my conversation with President Rouhani, I will not only be discussing Iran’s actions in the region, but also the need to release not just Nazanin but others who in our view are being illegally and unfairly held in Tehran,’ he said.

The UK was dismissing claims by Yemen’s Houthi movement that it was behind the Aramco attacks.

A Whitehall source said: ‘The Houthi’s claim of responsibility is implausible.

‘Imagery from the site of the attack shows the remnants of Iranian-made land attack cruise missiles and the scale, sophistication and range of the attack is inconsistent with the Houthi’s capability.’