Irish Prime Minister Leo Varadkar today called a general election for 8 February, hoping to capitalise on recent Brexit successes and his resistance of a hard border between Northern Ireland and the Republic.

Varadkar’s Fine Gael and the fellow centre-right Fianna Fail are closely matched in opinion polls, and some distance ahead of their other rivals, increasingly the likelihood that one of the two parties with similar policies on the economy and Brexit will lead to another minority administration.

After Britain’s tortuous exit from the European Union dominated politics in neighbouring Ireland following the last election in 2016, Varadkar sought to put Brexit at the centre of the campaign. He also acknowledged more had to be done for people to feel the strength of the economy in their pockets.

‘Brexit is not done yet. In fact, it’s only half-time,’ he said in a speech in front of government buildings. 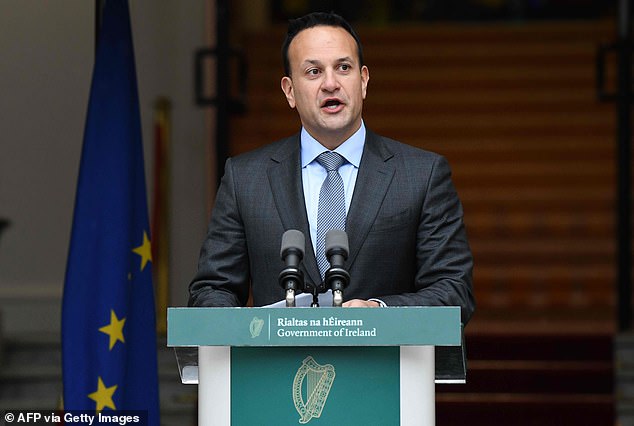 Ireland’s Prime Minister Leo Varadkar gives a press conference at the government buildings in Dublin on January 14, 2020 to announce an early general election 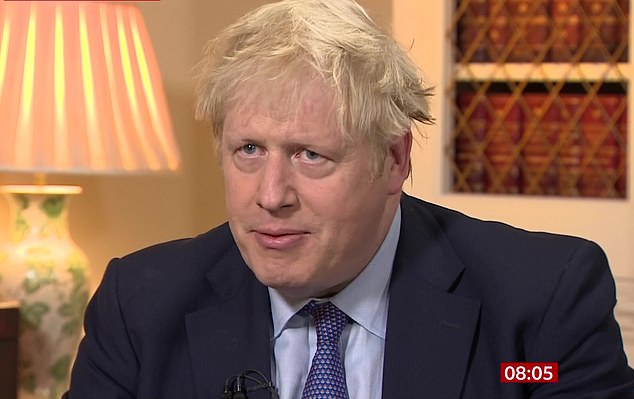 Varadkar plans to ‘negotiate a free trade agreement that protects our jobs, our businesses, our rural communities,’ with UK Prime Minister Boris Johnson after Brexit. (Pictured: Johnson this morning on BBC Breakfast)

‘The next step is to negotiate a free trade agreement that protects our jobs, our businesses, our rural communities… The capacity to do everything else that needs to be done – health, housing, climate action, tax reform – depends on achieving this outcome.’

Varadkar, 40, became the once-staunchly Catholic country’s first gay premier in 2017 when his party hoped a generational shift could lead them to a first ever third successive term.

He highlighted his success so far on Brexit, where a hard border between EU member Ireland and British-ruled Northern Ireland was avoided, as well as his own high profile in a video posted on Twitter that began with clips of international broadcasters saying his name.

Fianna Fail, which has swapped power with Fine Gael at every election since the state’s foundation a century ago, focused on anger among some voters over a health service bursting at the seams and a dysfunctional housing market where rents have become prohibitively high for many. 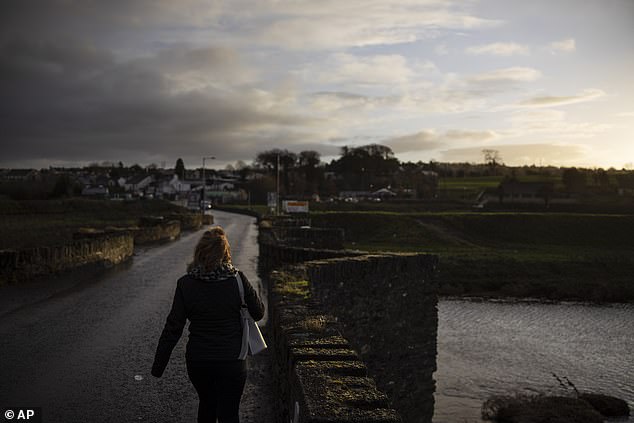 A pedestrian walks across the border from Ireland, over a bridge and into the town of Clady, in Northern Ireland, at sunrise on the 23 December, 2019. In Dublin today, Varadkar drew attention to his success in a hard border being avoided between the republic and northern Ireland

‘It clearly is a time for a new government that will really focus on tangible improvements in health, housing and reducing the cost of living,’ Fianna Fail leader Micheal Martin told reporters.

Fine Gael has led a minority government since 2016 through a cooperation deal with Fianna Fail – its fiercest rivals as far back as the country’s civil war in the 1920s – after neither came close to forming a working coalition last time out.

Fine Gael and Fianna Fail refuse to govern with Ireland’s third largest party Sinn Fein, once the political wing of the Irish Republican Army (IRA), meaning smaller parties such as the resurgent Greens could decide who leads the next government.

Analysts say one of the two big parties would need to move to a percentage share of the vote in the mid-30s from the 25 per cent to 27 per cent range they are currently polling to form a multi-party coalition and avoid another ‘confidence and supply’ deal.

‘All of the polls are telling us that the fragmented party landscape is still there,’ said Theresa Reidy, a politics lecturer at University College Cork.

Ratings agency S&P Global, which handed Ireland back its double-A sovereign debt rating in November, said in a note that the election was unlikely to sway economic policy, regardless of the outcome.