A circus troupe is surviving on savings and the kindness of strangers while they're stranded in a paddock in Melbourne’s outer east, six months after their last performance.

Circus folk are hardy by nature but Circus Royale owner and ringmaster Damian Syred said the COVID-19-imposed hiatus has been the toughest period he has seen in 19 years in the business. 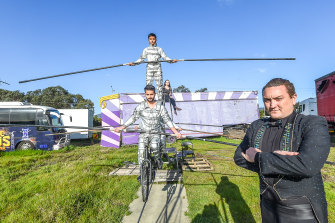 The circus’s last performance was on March 15, on the corner of Dorset and Canterbury roads in Bayswater.

And thanks to COVID-19 restrictions, 33 of its staff, including 22 foreigners, have been stuck there ever since, unable to go home. Just two staff are receiving JobKeeper benefits.

Syred said the Western Australian and South Australian governments have not allowed the circus to return to their property near Perth, where it could perform.

The troupe, including 11 horses, two camels, six dogs and six cats, has raised funds by selling a semi-trailer, two trucks and two caravans and Syred has spent more than $200,000 of his own money on expenses including rent and power. 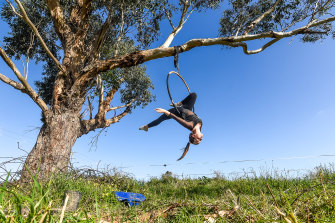 But he says it's been "overwhelming" to witness a stream of locals donating food and goods.

For example, the charity Bk 2 Basics, to whom Circus Royale has given tickets to its shows in the past to pass on to disadvantaged families, has repaid the favour by giving the circus groceries and sanitary items.

Sikh Volunteers Australia have cooked meals and offered to do so "every day if we need it", said Syred.

A family who live across the road from the circus also cooks meals for the circus once a week. 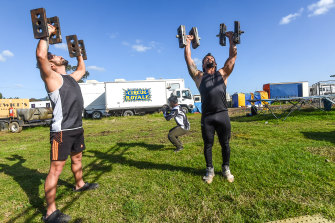 Highwire act brothers Sairus, Saret and Samir get in a spot of weight training Credit:Justin McManus

In the past few days they have started a delivery service to locals.

Syred said the circus usually tours 48 weeks a year, covering on average 54 towns, so to be in one spot for six months has been strange.

One 25-year-old Colombian performer, born into a circus family, had "never been in one town this long".

Syred said it had been a difficult, cold winter but the warmer weather and locals’ aid had boosted the team's spirits.

And yes, the show will go on – one day. Syred said many Victorians have lost jobs and income.

"We’re trying to make the best of a bad situation and hopefully come out the other end a little bit stronger."