Aged care funding was "totally inequitable" given the large growth in inheritances left by by rich Australians who should be using these assets to pay more for their own care while they were alive, the aged care commission heard. 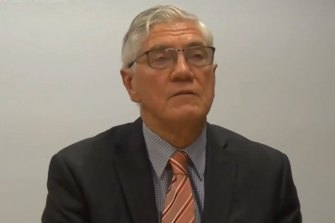 Former chair of the Aged Care Financing Authority Mike Callaghan said proposals, such as assets tests and payments from estates, should be considered to make the system more equitable.

Mr Callaghan, a former senior Treasury official, said on Thursday there had been a "large growth in inheritance" by the richest, yet those who could pay more for residential aged care were paying very little.

"I think it's totally inequitable, right across that, to think that people [in the highest income brackets} are not paying for the full range or making a bigger contribution to the services that they require as they age," he said.

"We have a situation now where most people, they don't spend their money that they have in retirement. When they die they haven't dipped into them," he said. "

The Grattan Institute reported last month that estates were growing in size, with a study of those in Victoria finding the median estate in Victoria is worth around $500,000.

It said Australia was increasingly living in what French economist Thomas Piketty calls a “Jane Austen world” where the rich got richer, and inherited wealth became the "dominant route to wealth in Australia".

The average inheritance growth rate is about 2 percentage points faster than inflation each year, and is expected to continue to rise.

Grattan reported that households headed by people aged over 75 now had an average of $1 million in assets, up from $400,000 in 1994. Most of this was being left to older adult children, in their 50s, and not benefiting younger generations.

Asked about former Prime Minster Paul Keating’s proposal for a HECS style contribution for aged care, Mr Callaghan said aged care shouldn't be looked at isolation from the tax system. He noted evasion was a major problem with the taxation of estates.

Mr Callaghan said ensuring an appropriate and equitable approach to the whole funding of aged care was important to get community support.

The Aged Care Royal Commission says it will also release a special report on the COVID-19 pandemic in aged care later this month.

Although its final report is not due until 26 February 2021, it said it will contain specific recommendations by the Commissioners to "expedite and facilitate the implementation of comprehensive measures to protect older Australians".

The most important news, analysis and insights delivered to your inbox at the start and end of each day. Sign up to The Sydney Morning Herald’s newsletter here, to The Age’s newsletter here and Brisbane Times‘ here.